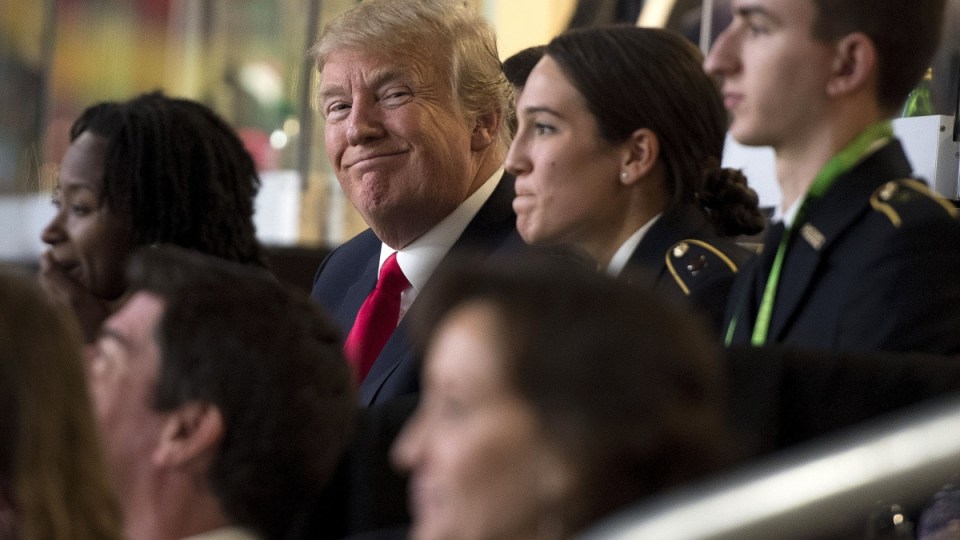 Will he be fired from singing duties? Mr Trump seemed upbeat after his national anthem slip up. Photo: Getty

United States President Donald Trump has been accused of forgetting the lyrics to the country’s national anthem during an appearance at a college football game in Atlanta.

Mr Trump was on the sidelines of an NCAA National Championship game between Georgia and Alabama on Monday (US time) when he joined a country music group and gospel choir to lead a rendition of The Star-Spangled Banner.

Cameras panning to POTUS – who last week called himself “a very stable genius” and “like, very smart” – caught him appearing to momentarily flub the words to his country’s most iconic song.

Mr Trump remembered to put his hand over his heart but seemed to forget the lyrics before making a fumbling recovery.

Added another, “Trump was mouthing some words during parts of the national anthem, but it was unclear what he was saying. He didn’t open mouth during other parts.”

It would appear that our celebrity in chief Donald Trump only knows intermittent parts of our national anthem. This looks as bad as a Mariah Carey “live” performance 🤷‍♂️ #NCAA #NationalChampionship pic.twitter.com/fBf1jdEo56

Earlier in the day, Mr Trump had lectured on the importance of the national anthem during a speech in Nashville.

“We want our flag respected,” he said, according to the Washington Post. “And we want our national anthem respected also.”

Mr Trump has had a controversial relationship with the national anthem during his term in office.

An outspoken critic of the NFL for letting players kneel during the song to protest racial injustice, he tweeted in September, “If a player wants the privilege of making millions of dollars in the NFL, or other leagues, he or she should not be allowed to disrespect … our Great American Flag (or Country) and should stand for the National Anthem.

“If not, YOU’RE FIRED. Find something else to do!”

While the White House called questions about the president’s mental suitability for office “disgraceful”, Mr Trump has reportedly agreed to try to end speculation about his mental and physical suitability for his job by having his first formal health check since being elected.

Reports say the president will be examined next week at the Walter Reed National Military Medical Centre, the country’s largest military hospital, by the same doctor as his predecessor Barack Obama.

The Telegraph reports a summary of the results will be made public.

The physical test will last around two hours and include blood and urine tests, heart checks and even questions about his sleeping habits and sex life, according to medical experts.

Last week, a psychiatrist called for the president to be physically detained for an “emergency” mental health evaluation.

Dr Bandy Lee, assistant professor in forensic psychiatry at the Yale School of Medicine, briefed a dozen Democratic politicians last month to “brief” them on Mr Trump’s fitness for office.

“Lawmakers were saying they have been very concerned about this, the President’s dangerousness, the dangers that his mental instability poses on the nation,” Dr Lee told CNN last week.

Dr Lee has never treated or consulted with Mr Trump and his comments sparked debate on the ethics of armchair diagnosis.

Donald Trump looked like he was struggling with the words on the National Anthem for a min there pic.twitter.com/0q03Vt4w3e

Donald Trump accused of forgetting lyrics to US national anthem