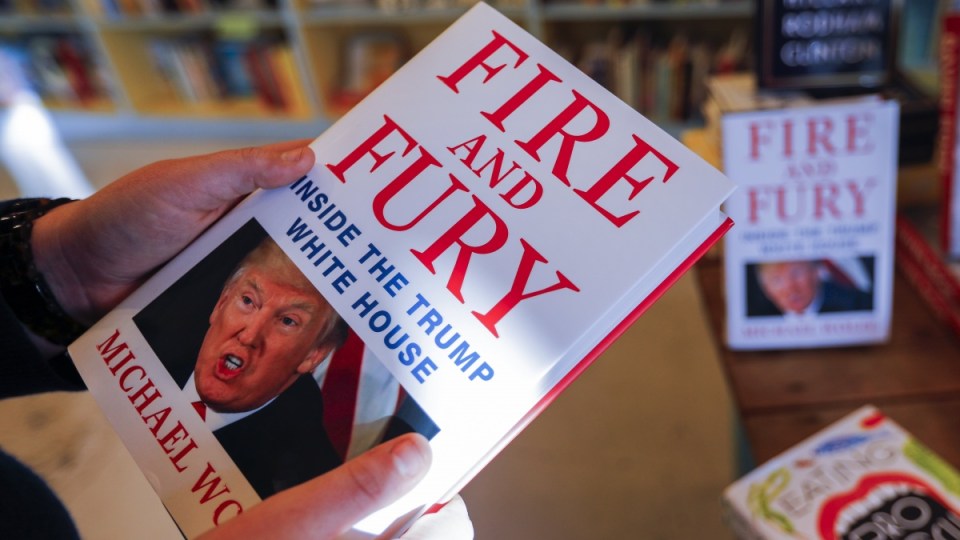 The new book Fire and Fury has been leaked in full online.

WikiLeaks has published the full text of Michael Wolff’s newly released book, Fire and Fury: Inside the Trump White House.

The website’s official Twitter account posted the link to a Google drive on Monday morning, leaking the book that has dominated headlines for free.

It comes after repeated assertions from the White House, the President’s advisors, and Donald Trump himself that the book is full of lies.

WikiLeaks has as yet given no explanation for its move. The New Daily contacted its media spokesperson for comment.

It is unclear whether it sought to weaken the book’s sales or to disseminate it more widely, given that the physical book has sold out in bookstores across the US.

The fallout from the book’s publication, brought forward to Friday after Mr Trump threatened legal action, continued on Sunday with a senior aide hitting out on CNN.

“The reality is that the President is a political genius,” Mr Miller said while accusing Mr Tapper of being “condescending” and “snide”.

“I have no idea why you’re attacking me,” Mr Tapper responded, saying Mr Miller was being “obsequious” and asking him to “calm down” before cutting the interview short.

“I think we have wasted enough of my viewers’ time,” Mr Tapper said, ending the interview.

He previously called the author a “total loser who made up stories in order to sell this really boring and untruthful book.”

I’ve had to put up with the Fake News from the first day I announced that I would be running for President. Now I have to put up with a Fake Book, written by a totally discredited author. Ronald Reagan had the same problem and handled it well. So will I!

Excerpts of the book had already been published by various outlets featuring damaging insights into the 2016 presidential campaign and Mr Trump’s presidency.

Among the candid interviews were assertions from former chief strategist Steve Bannon that a June 2016 meeting with a group of Russians at Trump Tower in New York was “treasonous” and “unpatriotic”.

Mr Bannon has since apologised to the Trump campaign, backtracking on claims Donald Trump Jr committed treason by meeting with Russians.

“Donald Trump Jr is both a patriot and a good man,” Mr Bannon said in a statement Monday morning.

“He has been relentless in his advocacy for his father and the agenda that has helped turn our country around,” he added, saying his comments in the book were directed at Paul Manafort, Mr Trump’s former campaign manager.

Mr Wolff says the book was based on more than 200 interviews with administration insiders.

Fire and Fury went on sale four days early on Friday (US time) in apparent gambit by the publisher to foil efforts by lawyers for Mr Trump to halt its release.