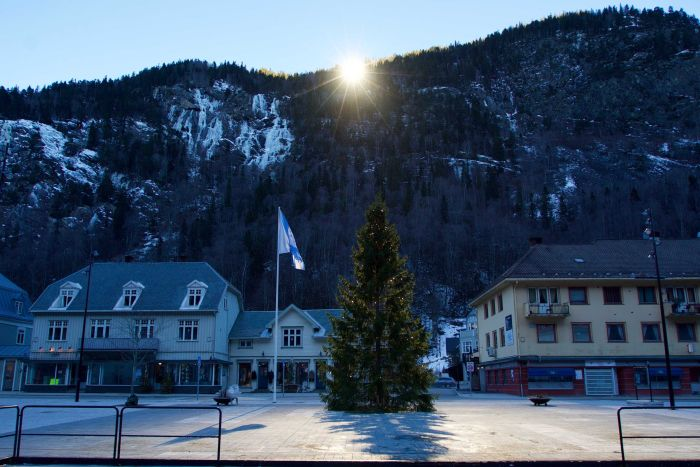 From above, Rjukan is simply stunning.

Snow slowly falls on the surrounding peaks and frozen waterfalls glisten in the weak afternoon twilight, while far below on the valley floor the lights of the town twinkle.

The landscape has long inspired mythical tales of trolls – it looks like something straight out of a fairytale.

But, according to a local artist, this tiny picturesque place has long had a big problem.

“The problem with Rjukan is that it is six months [a year] without any sun,” Martin Anderson tells me, as we sit in the town’s main square.

“In the winter time the sun is so low in the sky that the [mountains] block out the sun.”

On a clear day, you can see the sun on the surrounding peaks.

But between October and March, it never reaches as far down as the town – Rjukan sits in a permanent shadow.

Starved of vitamin D, Mr Anderson started a campaign to shine light into the dark place he calls home.

Shining a light into the town centre

Three giant heliostats now reflect the sun from a nearby mountain down into the town square, providing a small yet surprisingly warm circle of orange light.

“I prefer the real thing but it’s a good substitute if you have no other choice,” Mr Anderson says laughing.

It was first publicly promoted more than a century ago by engineer Samuel Eyde.

He played a key role in developing the town to support a massive hydroelectric plant nearby and was worried about what the lack of light would do to his workforce’s wellbeing in winter.

But in the early 20th century, the technology wasn’t good enough to reflect rays into Rjukan, so Norsk Hydro – the company Eyde worked for – ultimately decided to build a cable car to carry locals 814 metres up the mountain.

The top station is now home to one of the town’s top cafes.

Given they already had an easy way of getting a dose of vitamin D, many in Rjukan thought the sun mirror proposal was an expensive, extravagant gimmick.

“They thought it was actually madness to make a sun mirror out of that money,” Ingrid Fagerberg from the local tourism office explains.

But the project attracted a huge number of headlines across the world and led to a bump in international visitors.

While some still question whether the mirror was really worth it, most people we meet say it’s provided a boost to the town.

“We get so many people asking about the sun mirror. From China, Britain, America – it has made a difference,” Ms Fagerberg says.

“[Locals] see today the effect it has had on Rjukan as a tourist destination. So, the [critics] turned.”

Bathing in the reflected glow is not for the faint-hearted though, particularly if you’re from a warm climate.

It’s minus 12 degrees Celsius when we begin filming and only gets as warm as -6C in the middle of the day.

But Mr Anderson says the small ray of light helps him ward off the winter blues and survive even the darkest, coldest months of the year.

“It really makes a difference in our cold, dark winters,” he laughs.

“You are lucky with the sun in Australia and may not understand.

“But here, I think we really needed this.”

Rjukan, the town that needs giant mirrors to see the sun