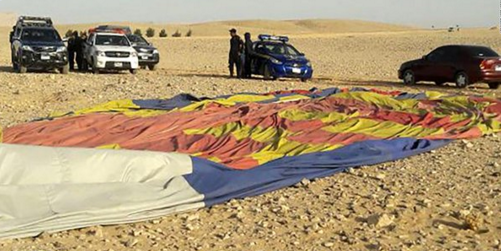 A South African man died in the crash and two French tourists and an Argentinian were taken to hospital. Photo: Twitter

An Australian tourist ignored her own shock and bruises as she tended to a dying fellow passenger after the horrific hot-air balloon crash in Egypt.

Lake Illawarra teacher Vanessa Condran, 31, was on the trip of lifetime with a tour party when she climbed into the ill-fated balloon’s gondola at dawn on Friday morning (Egypt time) with five fellow Australians among the passengers.

But the excitement of the flight over Luxor, site of some of Egypt’s most famous pharaonic temples and tombs, turned to sheer terror some 45 minutes later as the balloon was swept off its intended track by unexpectedly strong winds.

The tragedy claimed the life of a South African tourist and left 12 injured.

Five other Australians are among the injured. An Argentinian and two French tourists were being treated in hospital, a health ministry spokesman told the ABC.

“I am alright – a few bumps and bruises,” Ms Condran assured friends and family in a Facebook post.

“I feel lucky to have walked out of this traumatic experience, a scary freak accident.

“Probably will never set foot in another hot air balloon ever again.”

A spokesperson for Australia’s Department of Foreign Affairs and Trade said  consular assistance was being provided.

“She’s one of the ones that wasn’t knocked out and unconscious,” Mrs Condran told the Illawarra Mercury.

“She said she was OK, but had some [pain] with her neck and something with her finger from where she was hanging onto the rope.

“She was hanging onto some other girl who was hysterical – there were people hurt everywhere.”

The latest in a spate of balloon crashes that have seen flights banned for short periods over recent years, early reports say the pilot lost control while floating at an altitude of 450 metres over the mountainous area where this brightly couloured craft came to earth with a bone-shattering thud.

News agency MENA reported that the head of Egypt’s civil aviation authority, Hany al-Adawy, as saying the crash was “accidental” and that this time, unlike previous incidents, balloon flights would continue as usual while an investigation is launched. 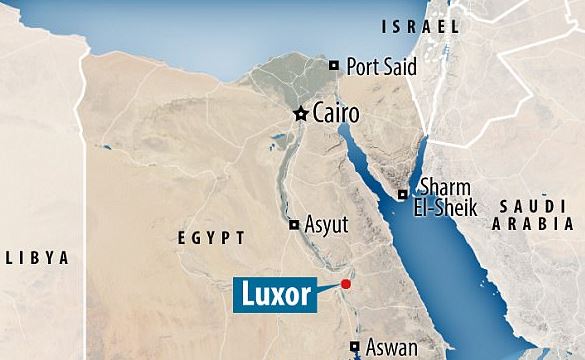 The Civil Aviation Ministry stressed that another 22 balloons carrying more than 400 people had taken off and landed safely on Friday. In 2016, Egypt temporarily halted balloon flights after 22 Chinese tourists suffered minor injuries in a crash landing.

The deadliest crash came in 2013 when a balloon flying over Luxor caught fire and plunged about 305 metres, crashing into a sugar cane field and killing all 19 aboard.

Mrs Condran said her granddaughter ignored her own minor injuries as she battled to save the South African.

“It was 10 or 15 minutes before anybody got there to help,” she said, explaining that the former volunteer surf lifesaver used her first-aid training in a bid to save the South African passenger.

“She got him in the recovery position,” Mrs Condran said.

“She had him on his side and tried to help him but she knew he wasn’t very good.”

Earlier in the day, Egypt’s meteorological service had warned of strong winds across the country, but the prediction said the worst gusts were expected in northern Egypt, where bad weather led to the closure of several Red Sea ports.

Over the years, Egypt has tightened safety rules for balloon rides, which are now monitored by cameras and banned from flying above 2000 metres.

The flights usually start shortly before sunrise and pass over green fields leading to the Valley of the Kings – the burial site of the famous boy king Tutankhamun and other pharaohs.