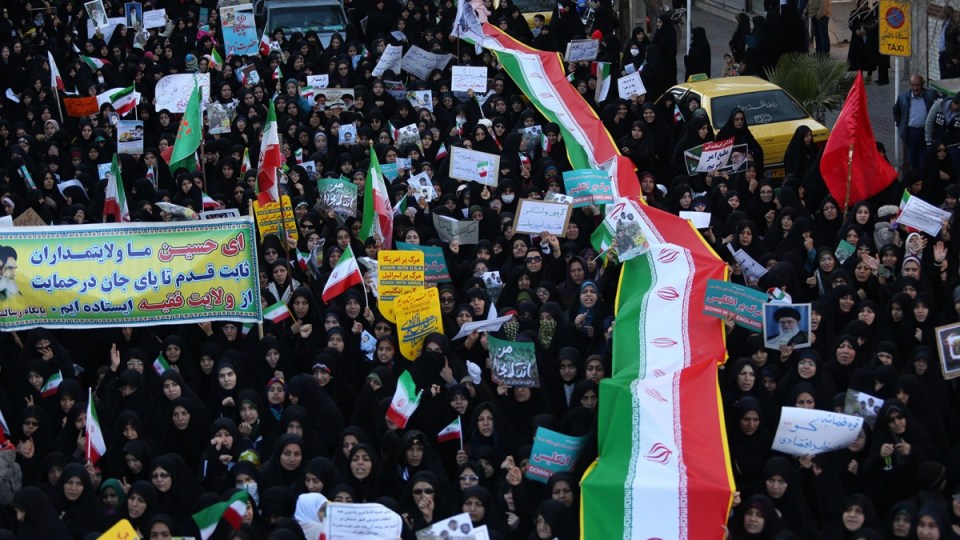 After six days of at times deadly protests across the country, Iran's elite Revolutionary Guards have been deployed to quell "sedition". Photo: Getty

Iran’s elite Revolutionary Guards have been deployed to three provinces to put down an eruption of anti-government unrest after six days of protests that have rattled the clerical leadership and left at least 22 people dead.

The protests, which began last week out of frustration over economic hardships suffered by the youth and working class, have evolved into a rising against the powers and privileges of a remote elite, especially Supreme Leader Ayatollah Ali Khamenei.

Defying threats from the judiciary of execution if convicted of rioting, protests resumed after nightfall with hundreds hitting the streets of Malayer in Hamadan province chanting: “People are begging, the supreme leader is acting like God!”

Videos on social media showed protesters in the northern town of Nowshahr shouting “death to the dictator” in an apparent reference to Mr Khamenei.

In a sign of official concern about the resilience of the protests, the Revolutionary Guards’ commander, Major General Mohammad Ali Jafari, said he had dispatched forces to Hamadan, Isfahan and Lorestan provinces to tackle “the new sedition”.

Most of the casualties among protesters have occurred in those regions of the sprawling Islamic Republic.

The Revolutionary Guards — the sword and shield of Iran’s Shiite theocracy — were instrumental in suppressing an uprising over alleged election fraud in 2009 in which dozens of mainly middle-class protesters were killed.

Anti-government rallies, held in defiance of the pervasive security services, have called for the downfall of the Islamic Republic, posing one of the most sustained challenges to the established order of the major oil-exporting state since the 1979 Islamic Revolution that overthrew the US-backed Shah.

In a state-sponsored show of force aimed at countering the outpouring of dissent, thousands of Iranians also took part in pro-government rallies in several cities on Wednesday morning (local time).

State television broadcast live footage of rallies in cities across the country, where marchers waved Iranian flags and portraits of Mr Khamenei, Iran’s paramount leader since 1989.

Pro-government marchers chanted, “The blood in our veins is a gift to our leader” and “We will not leave our leader alone”, in reference to Mr Khameni.

They accused the United States, Israel and Britain of inciting protests, shouting, “The seditionist rioters should be executed!”

On Tuesday, the 78-year-old Mr Khamenei had accused Iran’s adversaries of fomenting the protests.

US President Donald Trump, who has sought to isolate the Tehran leadership, reversing the conciliatory approach of predecessor Barack Obama, said Washington would throw its support behind the protesters at a suitable time.

“Such respect for the people of Iran as they try to take back their corrupt government. You will see great support from the United States at the appropriate time!” Mr Trump wrote in the latest of a series of tweets on Iran’s turmoil.