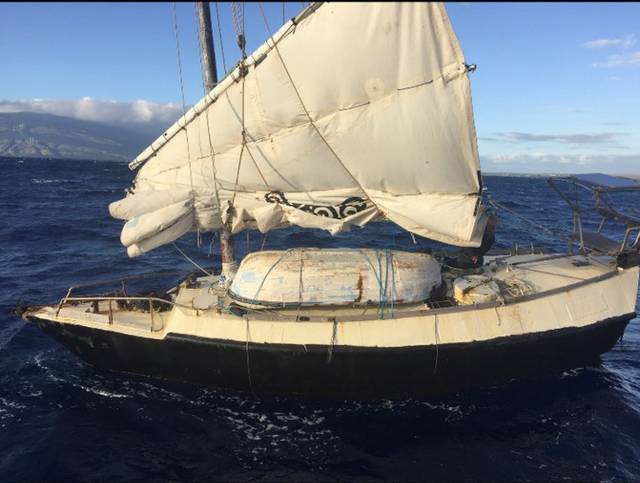 An Australian man trying to sail home in a homemade boat has been rescued off the coast of Maui, Hawaii. Photo: US Coast Guard

An Australian man sailing alone in a homemade boat was rescued off the coast of Hawaii after he was blown off course on a journey home from Panama, the Coast Guard says.

The 62-year-old man was in a 9-metre sailboat and flagged down a commercial passenger boat nearly 6 kilometres from Maui on Sunday afternoon, Coast Guard officials said.

The crew of the Trilogy V told authorities the man appeared disoriented, and he was having trouble sailing into port. The man was not identified.

The man had sailed from Panama more than 100 days ago, and he was on his way to Australia when weather forced him to Hawaii, officials said.

A Coast Guard response boat towed his vessel, the Kehaar Darwin, to Sugar Beach on Maui.

The man’s boat did not contain communication equipment or an engine and his sails were in poor condition, officials said.

“Being disoriented while at sea in a vessel with no communication capabilities aboard can be deadly if not handled quickly,” said Petty Officer 2nd Class Jacob Schlereth, a boarding officer and engineer at Station Maui.

“We commend the good Samaritan for recognising the complications and contacting the proper authorities to initiate a rescue.”

US Customs and Border Protection will interview the man before he continues his voyage.