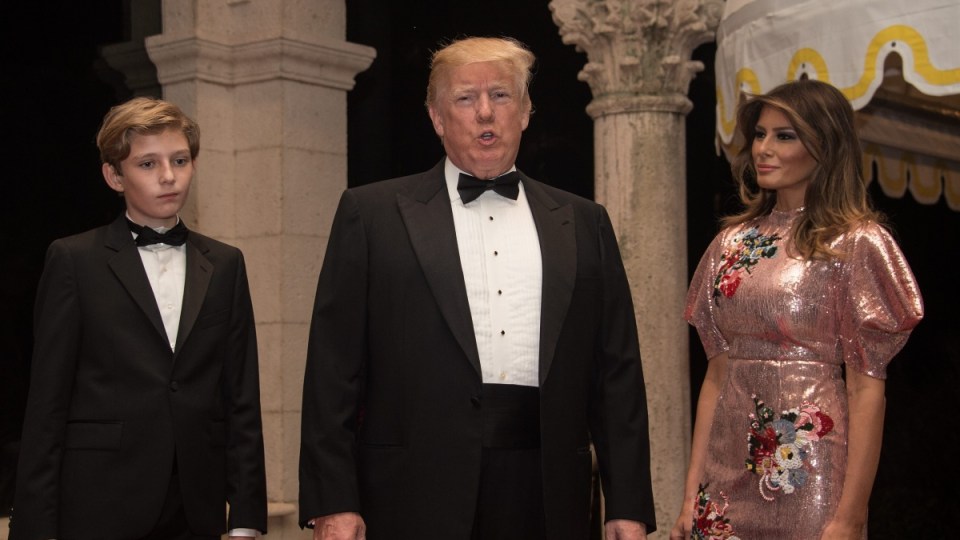 Donald Trump rings in the new year with son Barron and wife Melania at his Mar-a-Lago estate. Photo: Getty

Donald Trump did not enjoy his own inauguration and visibly fought with his wife Melania who seemed on the verge of tears, according to excerpts from a soon-to-be released book.

Along with bombshell claims about Mr Trump’s presidential style, Fire and Fury: Inside the Trump White House by Michael Wolff – excerpted in New York magazine – provides a glimpse into life at home with the president and spills on everything from how he does his hair to why he loves fast food.

On day one, at his swearing-in, the newly-minted commander in chief was “angry that A-level stars had snubbed the event” and was unhappy with his accommodations at Blair House.

“Throughout the day, he wore what some around him had taken to calling his golf face: shoulders hunched, arms swinging, brow furled, lips pursed,” wrote Mr Wolff.

When the dust settled, Mr Trump looked to his daughter Ivanka – who was given a West Wing job – for support. Their relationship is “in no way conventional” according to Mr Wolff, whose access to the White House was unrestricted.

Among the claims about Ivanka are that she has aspirations to be the first woman president, and treats her father with a “degree of detachment, even irony”, that extends to making fun of his trademark comb-over.

According to the excerpt, the mother-of-three often describes the “mechanics” of Mr Trump’s hairdo to others.

Reportedly, it starts with a clean, surgically-treated pate surrounded by a whirl of hair around the sides and front which are drawn up to meet in the centre, then swept back and blasted with hair spray.

The colour, an amused Ivanka would point out, is from a product called Just for Men which produces a darker result the longer it is left on. Mr Trump is too impatient to leave it on, resulting in his head turning an orange-blonde hue.

While the president’s hair and perma-tan are aesthetic touches passed on from his old life, he was “vexed” by not being able to immediately replicate other key factors from his former Trump Tower lifestyle in New York, according to the excerpts.

Most successful presidential candidates have been bowled over by being suddenly elevated to life with staff and a private plane in a famous mansion, but Mr Trump felt his his former life was bigger and better than his White House one.

Mr Trump was even a little scared by his changed circumstances, wrote Mr Wolff.

For the first time since the Kennedy White House, the president and first lady had separate bedrooms, and Mr Trump “retreated” to his, ordering two television screens to be added to the existing one.

He also put a lock on his door, which led to a brief brouhaha with the Secret Service, who insisted they have access at all times to the presidential boudoir.

Mr Trump also wrestled with his new housekeeping staff, telling them off for picking up a thrown-down shirt: “If my shirt is on the floor, it’s because I want it on the floor.”

He would also strip his own bed before telling staff he wanted his sheets changed.

Among Mr Trump’s rules are that nobody can touch anything, especially not his toothbrush.

According to the Fire and Fury excerpts, that phobia stems from a longtime fear of being poisoned which is one reason Mr Trump favours eating at McDonald’s: the food was safely pre-made and nobody had the heads-up he was dropping by.

In his first year, Mr Trump’s preference in the evening was to be in bed by 6.30pm, eating a cheeseburger while watching his three TVs and making phone calls.

While the president has settled into a domestic routine, he may have found it tougher to get up to speed on what his job entailed, according to the book excerpt.

Early in his campaign, then-campaign aide Sam Nunberg was sent to explain the Constitution to the candidate.

“I got as far as the Fourth Amendment,” Mr Nunberg recalled to Mr Wolff, “before his finger is pulling down on his lip and his eyes are rolling back in his head.”

At home with Donald Trump: his hairdo, what he eats in bed and what staff are told not to do