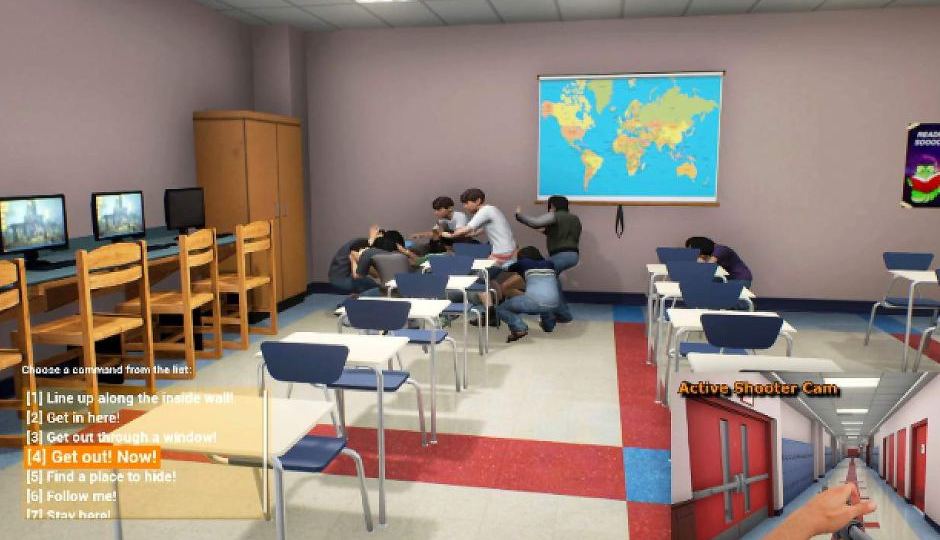 The United States Army has developed a computer-based simulator that can train everyone from teachers to first responders on how to react to an active shooter scenario.

The Enhanced Dynamic Geo-Social Environment (EDGE) was originally designed to keep soldiers safe in a war situation, but is now being adapted for schools.

The character of the shooter and the weaponry are changeable, and the screams of virtual victims are based on real events at schools, where teachers and children were murdered.

The 3D sound allows detecting the direction that the shots are coming from, and the simulator enables changing viewpoints between teachers, pupils, police officers and the assailants.

“Suspects come with rifles. Suspects can be adults or children. Unfortunately, that’s the reality of today’s society. We have to worry about children and adults being suspects,” project manager Bob Walker said.

“The suspect is going to go in and start some chaos. The teacher will show you how the teacher can respond to that with the students by taking different actions, lining them up against the wall.”

For life-like simulation, researchers studied real tragedies including the shootings at Columbine and Sandy Hook schools.

“It gives you chills when you’re sitting and thinking about what is happening during those tapes and how we might better prepare law enforcement and fire departments and all these people who have to deal with this.

“We sat with the mother of a child that died at Sandy Hook and she walked through the entire event, incident by incident, explaining it all to us.

“Very technically she was able to separate herself, and technically tell us exactly what happened, so that we could emulate that in the virtual environment.”

The video also aims to help minimise the damage a shooter can do by using more preventative measures.

“A lot of these features allow teachers to test out things that have been tried. For example, at Virginia Tech they found barricading the doors worked very well.

“So, this gives school districts the ability to try out different things, see what works for their given environment.”

The Federal Bureau of Investigation data shows nearly one third all mass shootings in the US since 2000 have been at schools.

The US Army’s research lab partnered with the University of Central Florida and other computer engineering firms to tailor scenarios for the school attacks.

One version of the virtual training is already being used by first responders, the Army Research Lab plans to make the school version available soon, free of charge.