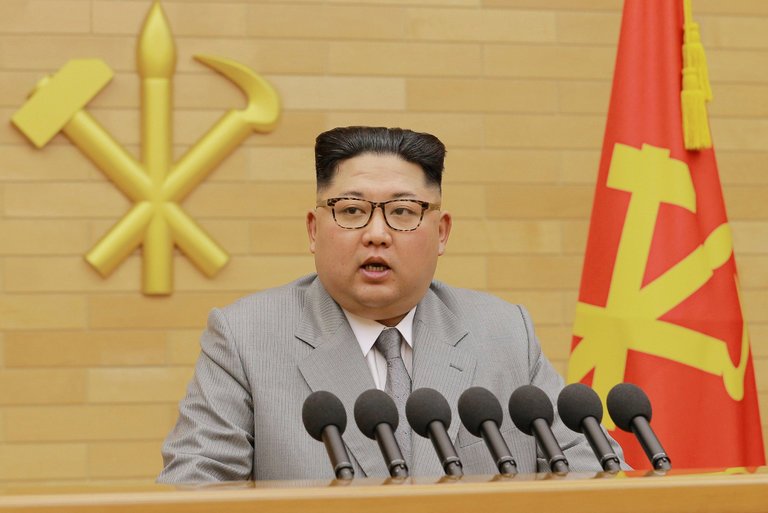 A new year, a new look for Kim Jong-un?

For his New Year’s speech, Mr Kim, the leader of North Korea, traded his usual atonal, Mao-collared outfits for what looked like the sort of silver-grey suit and matching tie that come straight from the elder statesmen costume department.

It was a choice seemingly calculated to — well, dress up his message of outreach to South Korea, in which he urged negotiations over the North’s possible participation in the Winter Olympics in the South in February.

North Korea’s top leaders have been known for their drab, peasant-style outerwear, with Mr Kim’s father, Kim Jong-il, favouring Mao-style jackets. But his son, in addition to ramping up his country’s weapons of mass destruction, appears intent on modernising his country’s look, too.

“He’s dressed like that before — a banker, wearing Armani,” said Robert Kelly, a political-science professor at Pusan National University in South Korea.

“There has been a lot of speculation that he is trying to make North Korea look more modern and connected. His father’s Mao suits looked ridiculous in the 21st century.”

Mr Kim’s lightly striped jacket came with a matching tie and slacks. His trademark hairstyle was carefully coifed, and in a twist, it was shorn above the ears, leaving what has been dubbed a “trapezoid shaped” haircut.

The soft tones of his outfit did not carry through to his message, in which he boasted of having “a nuclear button on the desk in my office.”

It also stood at stark odds with the reputation of a leader who is suspected of ordering the assassination of his half brother with VX nerve agent, having his uncle and mentor killed with antiaircraft machine guns and running a state security apparatus that enslaves even children in prison camps.

“It’s a flimflam,” Mr Kelly said. “Just a show. He’s the same ruthless SOB as his father and grandfather.”

The address was closely watched in South Korea, a country known for its attention to outward appearances, with a cosmetic surgery industry that is the envy of Asia.

Initial reaction there was positive, at least on the substance, with a South Korean government spokesman saying, “We have already expressed our willingness to engage in a dialogue with North Korea at any time.”

In dressing up for his speech, Mr Kim, who was educated in Swiss schools, may just be hearkening back to his grandfather, Kim Il-sung, the founder of North Korea and a man the young Mr Kim is often said to emulate, even in his rotund frame and haircut.

The grandfather was known for occasionally wearing Western-style suits, a marked contrast to other Communist revolutionary leaders of the time, like Mao Zedong and Ho Chi Minh.

Disease concern for survivors of Afghanistan earthquake
Steve Smith confirmed as starter for first Test against Sri Lanka
Matildas will be keen to forget 7-0 drubbing by Spain
Upcoming stats will reveal where and how hard rates are hitting economy
Victorian MPs pocket a tidy 2.75 per cent pay raise
Reserve Bank review isn’t a ‘get the governor’ exercise: Jim Chalmers
Hiker killed by lightning at Kings Canyon
Today's Stories

Kim Jong-un goes dapper, updating his style along with his arsenal