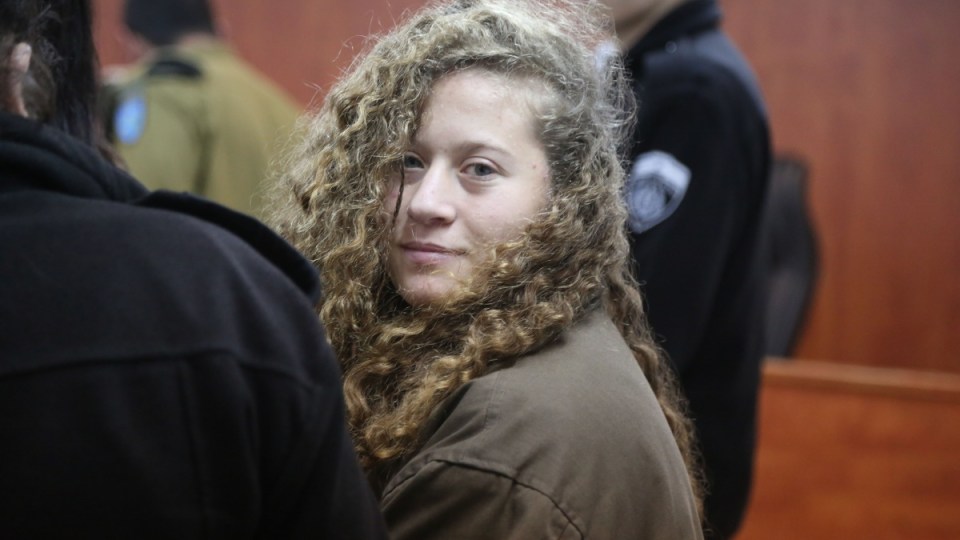 Israeli authorities have indicted a 16-year-old Palestinian girl with assault for punching a soldier in the face two weeks ago in a gesture made famous around the world.

The incident made the teenager a hero for Palestinians and was seen as humiliating by hard-line Israelis.

Israel has held Ahed Tamimi since arresting her three days after she was filmed punching the soldier at the entrance to her family home in a village in the occupied West Bank.

While the case has made her a potent symbol for Palestinians, right-wing Israelis have debated whether the soldier should have hit back.

The charge sheet against Ms Tamimi included counts of aggravated assault against a soldier and throwing stones at troops.

“Tamimi threw stones at [the soldiers], threatened them, obstructed them in fulfilling their duty, took part in riots and incited others to take part in them,” the military said on its public affairs Twitter account.

Qadoura Fares, chairman of the Palestinian Prisoners Club which advocates on behalf of Palestinians in Israeli jails, said the charges were false.

Ms Tamimi’s lawyer, Gaby Lasky, said she was certain some of the charges would eventually be dismissed, but nonetheless prosecutors may seek the maximum penalty for other counts.

Ms Tamimi has not been asked to enter a plea at this stage. The military court gave her lawyer more time to study the charges.

French foreign minister hails defeat of Morrison and his ‘notorious incompetence’
Tiger Woods quits PGA tournament after the worst round of his career
COVID claims 45 more lives as nationwide daily cases soar to 18,000
Volodymyr Zelensky: How war will end as Ukraine ‘breaks backbone’ of Russian army
Peter Dutton touted as next Liberal leader as he claimed victory in Dickson
‘The urgency of the situation’: WHO steps in as monkeypox cases erupt around the world
Donald Trump rages against Pakistan in first tweet of 2018
Today's Stories