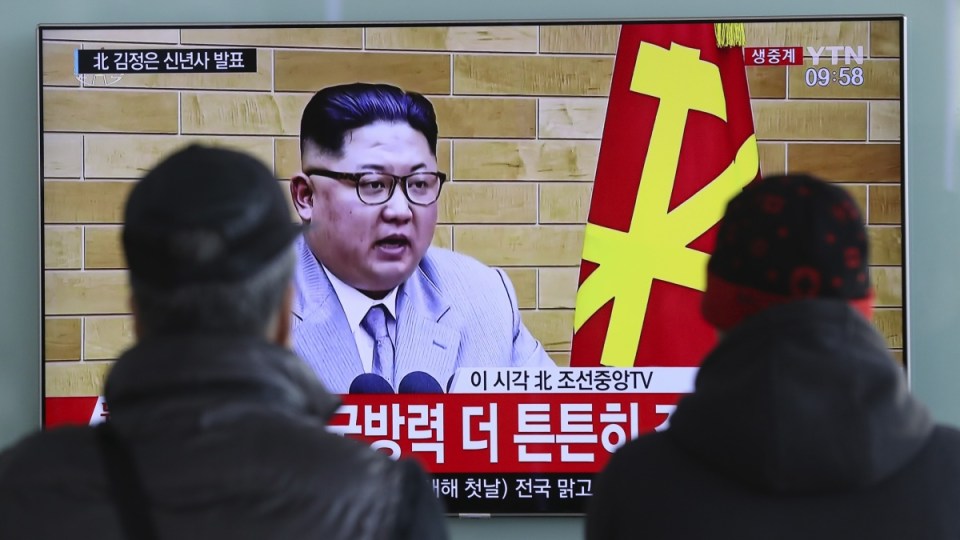 North Korean leader Kim Jong-un says the United States will never be able to start a war against the north now that his country has the capacity to hit all of the US mainland with its nuclear weapons.

“The entire United States is within range of our nuclear weapons, and a nuclear button is always on my desk. This is reality, not a threat,” Mr Kim said during a televised New Year’s Day speech.

“We have secured powerful deterrence against the nuclear threat from the US,” he added.

CNN reported Mr Kim said in his address that North Korea was “a responsible nuclear nation that loves peace”. He claimed he would only use his weapons if there was aggression against North Korea.

“This year we should focus on mass producing nuclear warheads and ballistic missiles for operational deployment,” Mr Kim said. “These weapons will be used only if our security is threatened.”

The comments came after a former chairman of the US Joint Chiefs of Staff said he believed the US had never been closer to a nuclear war with North Korea.

Retired Admiral Mike Mullen told ABC America’s This Week program: “I don’t see the opportunities to solve this diplomatically at this particular point”.

“We’re actually closer, in my view, to a nuclear war with North Korea and in that region than we ever have been,” he said.

Asked by reporters to comment on Kim’s speech, US President Donald Trump simply said “we’ll see, we’ll see”, as he walked into New Year’s eve celebration at Mar-a-Lago, his elite resort in Florida.

Korea tested intercontinental ballistic missiles and conducted its sixth and most powerful nuclear test in September in defiance of international warnings and sanctions, raising fears of a new conflict on the Korean peninsula.

Mr Kim said it is imperative to lower military tensions on the Korean peninsula and improve ties with the South, adding the path to dialogue is open.

Mr Kim also said he will consider sending a delegation to the Winter Olympics Games to be held in Pyeongchang, South Korea, in February.

“North Korea’s participation in the Winter Games will be a good opportunity to show unity of the people and we wish the Games will be a success. Officials from the two Koreas may urgently meet to discuss the possibility,” Mr Kim said.

South Korean President Moon Jae-in has said North Korea’s participation will ensure safety of the Pyeongchang Olympics and proposed last month that Seoul and Washington postpone large military drills that the North denounces as a rehearsal for war until after the Games.

“The (committee) will discuss relevant matters with the South Korean government as well as the International Olympic Committee,” he said.

‘Closer than ever to a nuclear war with North Korea’: US former top brass