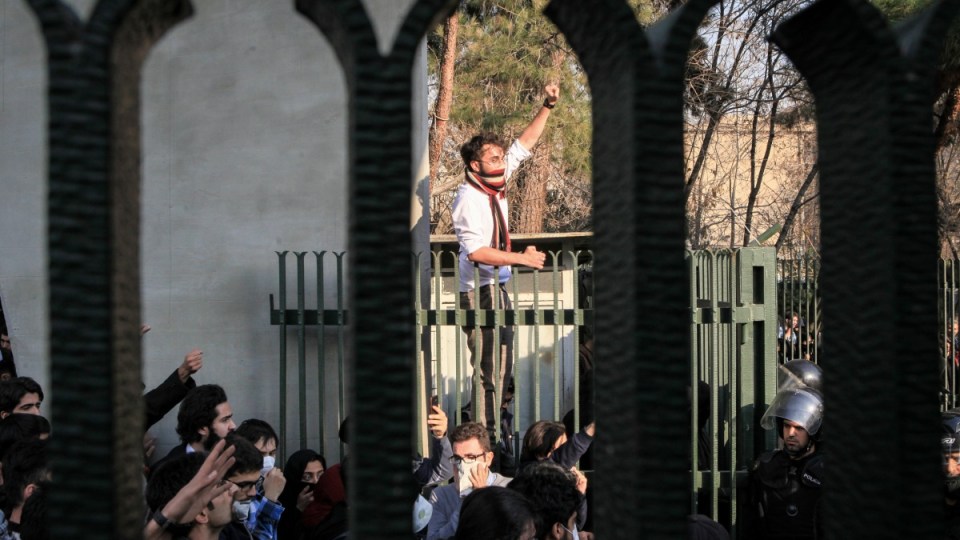 A protestor covers his face during unrest in Iran. Photo: Getty

A further nine people have been killed across Iran overnight amid a wave of anti-government protests, state television reports.

The latest deaths bring the number of people killed in the violence to at least 19, according to official sources.

It was not clear if those killed in the overnight clashes were demonstrators, police, or members of the country’s paramilitary Revolutionary Guard.

According to the report, one Revolutionary Guard member, who had previously been identified as a policeman, was shot dead in the central city of Najafabad.

The report said the man’s death was proof that some of the demonstrators are armed.

There were also unconfirmed reports that police in a dozen cities were reported to have shot at protesters, possibly causing further deaths.

Ten other people were confirmed dead across the country, according to official figures, forcing President Hassan Rowhani and his government to address demonstrators’ demands.

Iranian police have arrested 450 protesters in the capital over the past three days.

Security forces have struggled to contain protests that broke out last Thursday and have continued nationwide in the boldest challenge in years to the country’s clerical leadership.

The ILNA news agency report quoted Ali Asghar Nasserbakht, a security deputy governor of Tehran, who said said 200 protesters were arrested on Saturday, 150 on Sunday and 100 on Monday.

“The problems of the people are not simply economic in nature. They’re also demanding more freedoms,” Rowhani said Monday, in an indirect attack on regime hardliners who oppose his attempts to push through political and cultural reforms.

According to unconfirmed reports circulated online, between 100 and 800 people have been detained in the protests.

“I do not know whether yesterday’s shooting was done by rally participants or the police and this issue is being investigated,” local MP Hedayatollah Khademi had said before the latest deaths were reported.

Regional governor Mostafa Samali told the semi-official news agency Fars that just one person had been killed and that the incident was unrelated to the protests and the alleged shooter had been arrested.

Unsigned statements posted on social media urged Iranians to demonstrate again in the capital Tehran and 50 other urban centres.

US President Donald Trump tweeted in support of the protestors on Sunday night, writing: “The people are finally getting wise as to how their money and wealth is being stolen and squandered on terrorism.”

Big protests in Iran. The people are finally getting wise as to how their money and wealth is being stolen and squandered on terrorism. Looks like they will not take it any longer. The USA is watching very closely for human rights violations!

Iran is a major OPEC oil producer and regional power but frustrations have grown at home while the country is deeply involved in Syria and Iraq as part of a battle for influence with rival Saudi Arabia.

The unrest erupted in the second city of Mashhad against oil price rises but it swiftly spread and turned into political rallies.

Some called on Supreme Leader Ayatollah Ali Khamenei to step down and chanted against a government they described as thieves.

Demonstrators are angry over corruption and economic hardship in a country where youth unemployment reached 28.8 per cent last year.

Protests continued overnight even though President Hassan Rouhani appealed for calm. In remarks carried on state TV, he said Iranians had the right to criticise authorities but also warned of a crackdown.

The government will show no tolerance for those who damage public properties, violate public order and create unrest in the society.”

Police in the centre of Tehran fired water cannon on Sunday to try to disperse demonstrators, according to pictures on social media.

Demonstrations turned violent in Shahin Shahr in central Iran. Videos showed protesters attacking the police, turning over a car and setting it on fire.

The protests were the biggest since unrest in 2009 that followed the disputed re-election of then-President Mahmoud Ahmadinejad.

It has blocked access to Instagram and a popular messaging app used by activists to organise and publicise the protests now roiling the Islamic Republic, as authorities said two demonstrators had been killed overnight in the first deaths attributed to the rallies.

The country’s powerful Revolutionary Guard warned of a crackdown against demonstrators who pose one of the biggest challenges to both the government and clerical leadership in power since the 1979 revolution.

The Guard, tasked with safeguarding the Islamic Revolution, warned it would respond with a “hard punch” if the protests did not cease.

In apparent response to the protests, the government backed down on plans to raise fuel prices, promised to increase cash handouts to the poor and create more jobs in coming years.

French foreign minister hails defeat of Morrison and his ‘notorious incompetence’
Tiger Woods quits PGA tournament after the worst round of his career
COVID claims 45 more lives as nationwide daily cases soar to 18,000
Volodymyr Zelensky: How war will end as Ukraine ‘breaks backbone’ of Russian army
Peter Dutton touted as next Liberal leader as he claimed victory in Dickson
‘The urgency of the situation’: WHO steps in as monkeypox cases erupt around the world
Australia welcomes in 2018 in dazzling style – with minor hiccups
Today's Stories

Another night of protest violence takes Iran death toll to 19