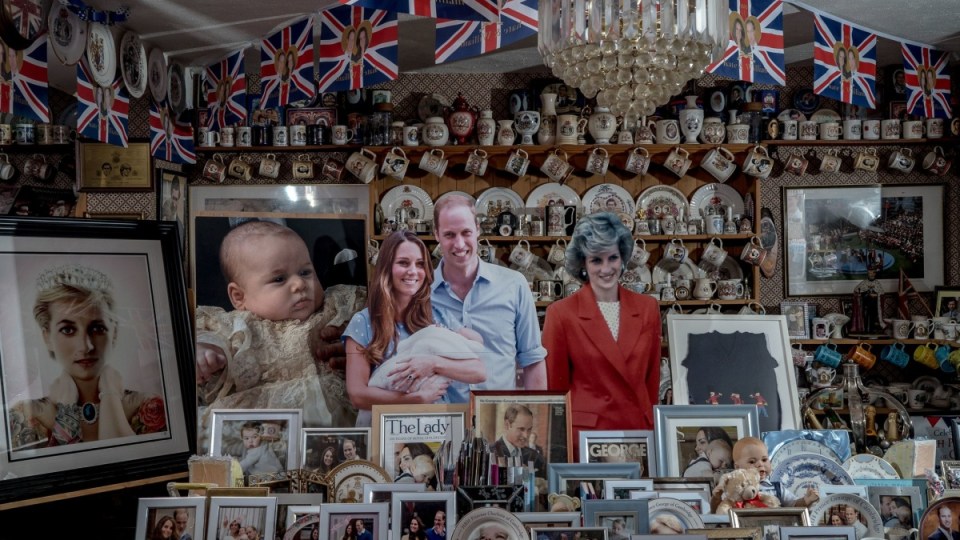 Royal memorabilia are popular items. A portion of Margaret Tyler’s collection at her home in London. Photo: Andrew Testa / NYT

The cameras had barely finished flashing on the newly engaged Prince Harry and Meghan Markle. But Emma Bridgewater, a British ceramics manufacturer, was already making a mug to commemorate the royal moment.

From crockery emblazoned with official portraits to solar-powered toys with the Queen’s characteristic wave, Britain’s monarchy is big business. And that royal economy, normally catering to tourists and enthusiasts, kicks into high gear around major events.

“It’s a flash of colour in a rather grey world,” said Emma Bridgewater, the eponymous founder of the ceramics company.

Britain’s royal family will contribute an estimated £1.8 billion ($3.1 billion) to the country’s economy this year, according to Brand Finance, a consulting firm. The bulk of that was £550 million ($949 million) from tourism.

Brand Finance estimates that travellers in town for Prince Harry’s wedding, scheduled for the spring, will bring an additional £500 million ($863 million) next year. Roughly one-tenth of that amount is expected to come from merchandise sales.

Enthusiastic collectors like Margaret Tyler are a discerning audience.

A dedicated royalist, Ms Tyler, 73, has filled her home in north-west London with commemorative items, including a copy of the Issa dress that Kate Middleton wore during the announcement of her engagement to Prince William, and a little glass dish with a picture of Queen Elizabeth II that started her collection. One of her rooms is dedicated solely to Princess Diana, and another to the queen, which she rents out for £75 ($129) a night. Insurers have valued her collection at £40,000 ($69,000).

“I would like nice proper bone china stuff,” Ms Tyler said of the merchandise surrounding the latest royal wedding. “I don’t buy everything. I’ve got to like it.”

Royal fever is a capitalist tradition in Britain.

Royal Crown Derby, a porcelain manufacturer, has been making commemorative products since the coronation of King George III in 1760. Jan Hugo, a 59-year-old collector, based in New South Wales, with 10,000 pieces has teapots dating back to Queen Victoria’s reign.

“I think they just look for an excuse to be able to do it, every time there’s a birth, wedding, engagement, anniversary, anything,” Ms Hugo said.

When Prince William married in 2011, the high-end British department store Fortnum & Mason sold a Wedding Breakfast Blend tea from Kenya, where he proposed. The Lego-themed amusement park Legoland made a brick replica of Buckingham Palace, complete with the bride, groom and assorted well-wishers. The pizza delivery chain Papa John’s even turned their faces into a pizza.

Ms Bridgewater’s company has sold over 35,000 pieces of pottery based around Prince William’s wedding and has produced 15 different commemorative mugs for events ranging from Prince Andrew and Sarah Ferguson’s wedding in 1986, to the birth of Prince William’s second child, Princess Charlotte, in 2015. The company has annual sales of about £20 million ($34.5 million).

The merchandise this time around is extensive. Ms Bridgewater has another mug and tea towel planned for the wedding next year, as well as a mug to celebrate the third child of Prince William and Catherine, the Duchess of Cambridge, due in April.

Royal Crown Derby has a series of designs in the works, like a £75 ($129) heart-shaped tray and a £150 ($258) octagonal plate finished in gold. The company began planning four months before the engagement was officially announced as gossip swirled in the British press.

It is now waiting for specifics, such as whether Ms Markle will use her given name, Rachel, to put the finishing touches on its fine bone china products.

“One of the things that the collectors insist is that it has that level of information and detail applied to the design,” said Steven Rowley, Royal Crown Derby’s sales and marketing director.

As royal fever grows, the company plans to hire an additional 10 to 15 people. It is also hoping to tap into heightened interest in the United States — Ms Markle is American — to push its products in places like Bloomingdale’s and Bergdorf Goodman.

Tour operators and travel agencies are also gearing up.

British Tours is putting together potential itineraries. The company already runs “Kate and William tours,” which follow the footsteps of the royal couple, visiting the town where they went to college and Westminster Abbey, where they married.

Olivia Basic, a tour planner at the company, said the themed tours for Prince Harry and Ms Markle could include upscale nightclubs where the prince — known in his earlier years for partying heavily — has been spotted.

Others offer a chance to catch a glimpse of the wedding itself. Two days after Prince Harry’s engagement was announced, the luxury travel company Noteworthy started scouting locations near the wedding site, St George’s Chapel in Windsor Castle.

Noteworthy is looking to replicate a similar experience during Prince William’s wedding. Back then, it hired a place opposite Westminster Abbey so clients — 80 of whom paid £500 ($863) each — could watch the bride and groom as they arrived and left the church. For the celebrations commemorating Queen Elizabeth II’s Diamond Jubilee, 200 people paid about £300 ($517) each to spend the day on the HMS Belfast, an historic warship, to have prime position to watch the monarch’s flotilla pageant.

Noteworthy has already secured a location for guests to watch Prince Harry’s wedding. But the managing director of Noteworthy, Nicola Butler, declined to say where. She said, however, that it had a view over Windsor Castle’s Henry VIII Gate and was “a space that a high-net-worth individual from the U.S. would be comfortable in”.

Prince Harry is getting married. Time for themed mugs and nightclub tours