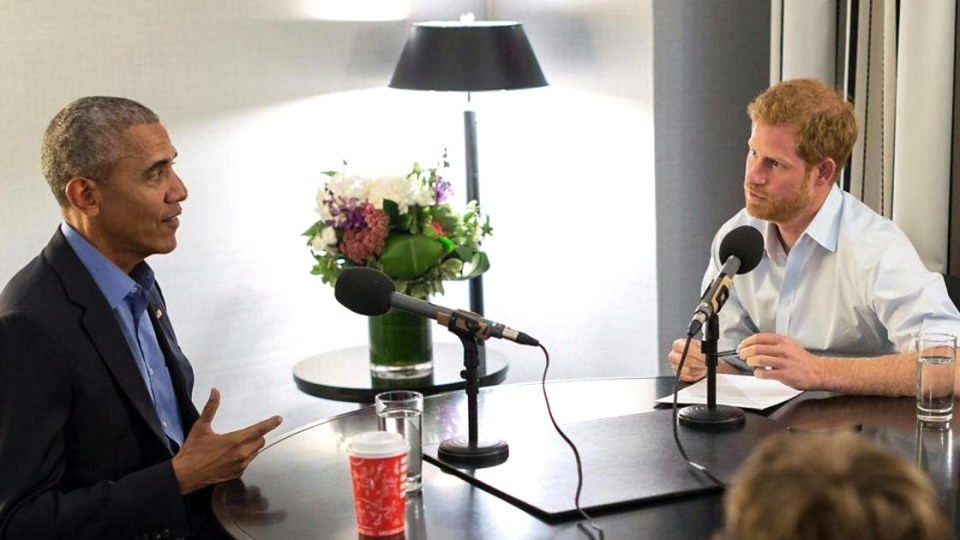 Former US president Barack Obama has spoken at length with friend and fifth-in-line to the British throne, Prince Harry, about politics, climate change and the dangers of the internet, but it appears the topic of underwear is classified.

In the discussion, Mr Obama warned that the irresponsible use of social media was distorting public debate and spreading misinformation.

“One of the dangers of the internet is that people can have entirely different realities,” he said. “They can be cocooned in information that reinforces their current biases.”

His proudest achievement while in office? Obamacare.

“What an enormous blessing it is to say that 20 million Americans have health insurance that didn’t have it before.”

But when it came to his favourite Kardashian, he again took the Fifth.

Mr Obama artfully deflected a question about his thoughts on Donald Trump’s inauguration by making his answer all about his love for his wife, Michelle Obama.

“The first thing that went through my mind sitting across from Michelle, how thankful I was that she had been my partner through that whole process,” he said.

“She is a spectacular, funny, warm person. She is not someone who was naturally inclined to politics. So in some ways despite the fact that she was, I think as good of a First Lady as there has ever been, she did this largely in support of my decision to run.

“And for us to be able to come out of that intact, that our marriage was strong, we’re still each other’s best friends. Our daughters turning into amazing girls, amazing young women.

The sense that there was a completion and that we had done the work in a way that preserved our integrity and left us whole and that we hadn’t fundamentally changed, I think was a satisfying feeling.”

Prince Harry was himself interviewed at the end of the program by usual hosts Justin Webb and Sarah Montague.

He was coy about whether he would invite the Obamas to his wedding next May.

“I don’t know about that,” Harry said. “We haven’t even put the invite or the guest list together. Who knows if he’s going to be invited or not. I wouldn’t want to ruin that surprise.”

Prince Harry was also quizzed about how Meghan Markle coped with meeting the “in-laws”.

He replied: “It was fantastic, she really enjoyed it.”