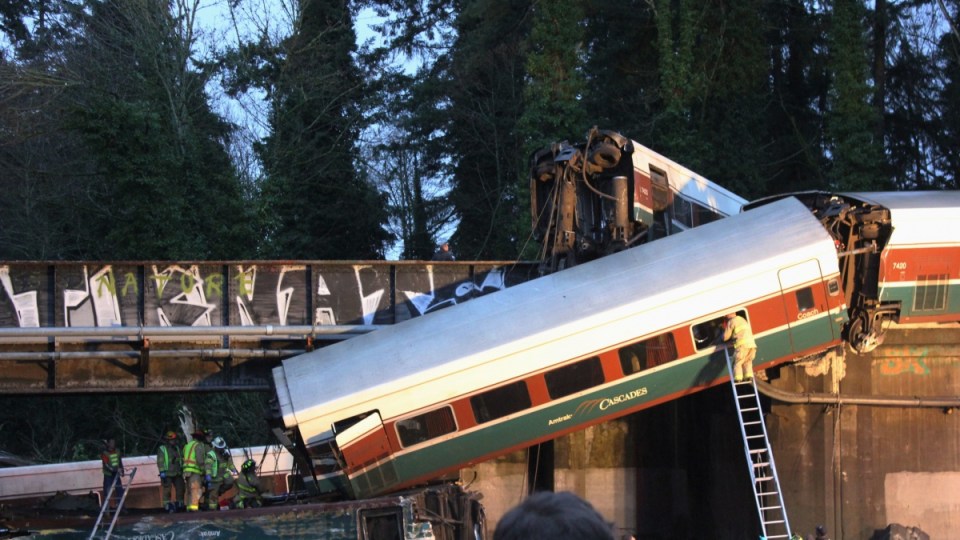 Investigators say the Amtrak train was travelling at 129km/h in a 48km/h zone when it hurtled onto a highway. Photo: AP

The US passenger train that hurtled off an overpass onto a busy highway was travelling at more than double the speed limit at the time of the deadly train derailment.

The Amtrak train, making the first-ever run along a faster new route, spilled off an overpass south of Seattle killing at least three people and injuring dozens.

Federal investigators, who continued to assess the scene of the tragedy Wednesday morning (AEST), say the train was travelling at 80mp/h (129km/h) in a 30mp/h (48km/h) zone when it derailed.

Bella Dinh-Zarr, a National Transportation Safety Board (NTSB) member, told a media conference Tuesday night that information from the event data recorder in the rear locomotive provided information about the train’s speed.

Ms Dinh-Zarr said it was not yet known what caused the train derailment and that “it’s too early to tell” why it was going so fast.

There were 80 passengers and five on-duty crew on board when the train derailed and pulled 13 cars off the tracks.

Authorities said there were three confirmed deaths and 100 people hurt – including 10 with serious injuries.

“We have recommended PTC for decades,” she said.

“Unfortunately the deadline was moved farther into the future, and every year that we wait to implement PTC to its fullest extent means that more people will be killed and injured.”

PTC was installed in the segment of tracks where the derailment happened, but wasn’t yet operational.

Daniel Konzelman, who was driving on Interstate 5 at the time, told CNN the train and his car were “kind of parallel” and “it was going faster than us”.

About two hours after the accident, a US official who was briefed on the investigation said he was told at least six people were killed. The official said he had no new information to explain the discrepancy in the numbers.

The official was not authorised to discuss the investigation publicly and spoke to The Associated Press on condition of anonymity.

A track chart prepared by the Washington State Department of Transportation shows the maximum speed drops from 79m/h (127km/h) to 30m/h for passenger trains just before the tracks curve to cross Interstate 5, which is where the train went off the tracks.

The chart, dated February 7, 2017, was submitted to the Federal Railroad Administration in anticipation of the start of passenger service along a new bypass route that shaves 10 minutes off the trip between Seattle and Portland.

The stretch of track where the derailment happened had previously been used by slow-moving freight trains, but was recently upgraded to handle passenger trains as part of a $US181-million ($236-million) project to cut travel time between the cities of Tacoma and Olympia.

Washington state’s transportation department said the track underwent “weeks of inspection and testing” before the new route was inaugurated on Monday.

In a radio transmission immediately after the accident, the conductor can be heard saying the train was coming around a corner and was crossing a bridge that passed over Interstate 5 when it derailed.

Dispatch audio also indicated that the engineer survived with bleeding from the head and both eyes swollen shut.

“I’m still figuring that out. We’ve got cars everywhere and down onto the highway,” he tells the dispatcher, who asks if everyone is OK.

Aleksander Kristiansen, a 24-year-old exchange student at the University of Washington from Copenhagen, was going to Portland to visit the city for the day.

“I was just coming out of the bathroom when the accident happened. My car just started shaking really, really badly,” he said.

The back of his train car was wide open because it had separated from the rest of the train, so he and others were able to jump out to safety.

He was at about the middle of the train, either the sixth or seventh car, he said, and was “one of the lucky ones”.