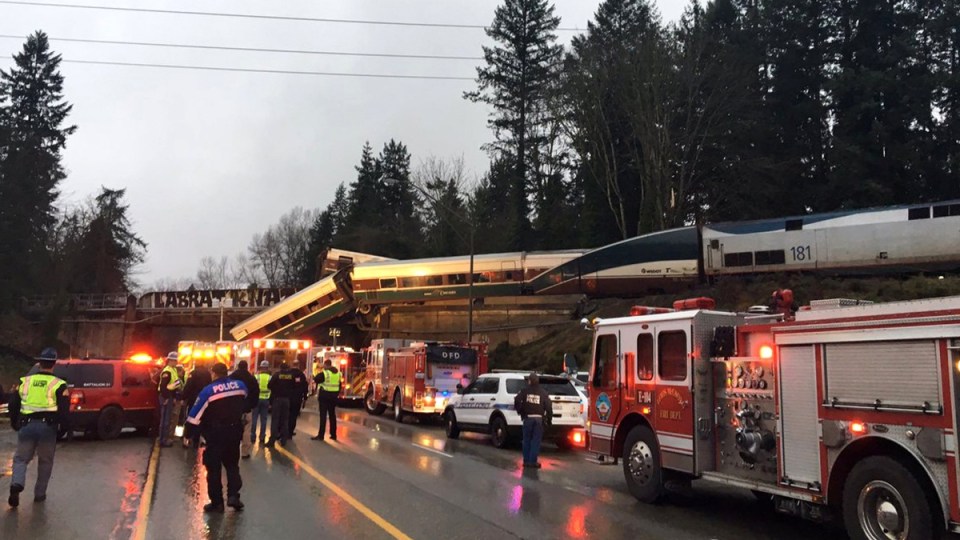 One carriage was left dangling from the bridge as another tumbled onto a busy highway. Photo: AP

President Donald Trump has been accused of insensitively politicising a train crash which has claimed at least three lives.

Within hours of the crash near Seattle in Washington state, in the northwestern United States, Mr Trump’s first tweet focused on the politics of the incident, not on condolence or support for the victims.

“The train accident that just occurred in DuPont, WA shows more than ever why our soon to be submitted infrastructure plan must be approved quickly,” tweeted Trump.

“Seven trillion dollars spent in the Middle East while our roads, bridges, tunnels, railways (and more) crumble! Not for long!”

The train accident that just occurred in DuPont, WA shows more than ever why our soon to be submitted infrastructure plan must be approved quickly. Seven trillion dollars spent in the Middle East while our roads, bridges, tunnels, railways (and more) crumble! Not for long!

An editorial by US network CNN blasted the President’s knee-jerk reaction.

“That is a somewhat remarkable tweet from a president given the fact that emergency crews were still sorting through the rubble, several people had been killed in the accident and 77 people had been taken to a variety of local hospitals,” CNN opined.

“It’s not the wrong message. But it’s definitely the wrong time for that message.

“His past history suggests Trump is willing to play politics almost immediately after tragic events.

“What do those two tweets tell us? That Trump’s first instinct is always to look for an angle that benefits him or, even more ideally, proves he is right about something controversial he has said in the past.”

“My thoughts and prayers are with everyone involved in the train accident in DuPont, Washington,” Mr Trump tweeted. “Thank you to all of our wonderful First Responders who are on the scene. We are currently monitoring here at the White House.”

The passenger train crash killed three people – the toll being downgraded from an earlier figure of six – after it derailed on a bridge over a major highway, sending part of the train crashing down onto the highway.

The Amtrak train carriage plummeted onto the Interstate 5 highway about 60 kilometres south of Seattle before 8am on Monday (local time).

There were more than 80 passengers and seven crew members on board, officials said, when the train, travelling at about 130 kilometres per hour, derailed.

A spokesperson for the Washington State Patrol said 13 carriages left the tracks.

The derailment occurred on the first day that Amtrak trains began using a new track between the cities of Tacoma and Olympia, according to a news release from the state’s transportation department.

The cause of the train derailment is not known.

The Pierce County Sheriff’s Office said several vehicles on Interstate 5 were struck by falling train cars and multiple motorists were injured. No fatalities of motorists were reported.

Michael Courts, mayor of nearby Dupont told CNN that all of the known injured have been removed from the site of the train derailment, but the final death toll is still unknown.

“I don’t think anybody know that yet. They have not gotten into the depths of the train or lifted the cars,” he said.

The nearby City of Lacey send a message out calling for donations of blood for the injured being treated at its hospitals.

Washington GovernorJay Inslee has declared a state of emergency in two counties.

All SB lanes of I-5 blocked near Mounts Road in Pierce County due to derailed train car. Avoid area! pic.twitter.com/SBH7dCc6yg

A photograph posted on Twitter by the Washington State Department of Transportation showed a train carriage that had apparently veered off a bridge onto the highway below.

A spokesman for Pierce County Sheriff’s Office, Ed Troyer, said several cars and trucks on the highway were struck by the train carriages, while several other derailed carriages were left laying upside down further along the rails.

Amtrak passenger Chris Karnes told local news outlet KIRO 7 that passengers were forced to kick out train windows in order to escape, because emergency doors were not functioning properly following the derailment.

“We had just passed the city of DuPont and it seemed like we were going around a curve,” Karnes said. “All of a sudden, we felt this rocking and creaking noise, and it felt like we were heading down a hill.

“The next thing we know, we’re being slammed into the front of our seats, windows are breaking, we stop, and there’s water gushing out of the train. People were screaming.”

Chris Karnes who was three or four carriages from the front of the train said he was “not sure what got hit” but that “there are several cars that are hanging over the overpass.”

The mayor of one of the towns through which the rerouted trains travel warned earlier this month that the high-speed trains were dangerously close to cars and pedestrians.

‘I am not afraid’: The modern unknown soldier risks it all in Ukraine
Energy market reform will be a big boost for emissions reductions: Chris Bowen
Greens sign up for Labor’s looming jobs-and-skills summit as Liberals stick with boycott
Joe Biden’s $430b green victory for the environment
China cementing its Thailand ties with joint military exercises
NRL: Titans frantic to end 10-game losing streak as Manly showdown looms
UN to vote on Donald Trump’s Jerusalem decision
Today's Stories