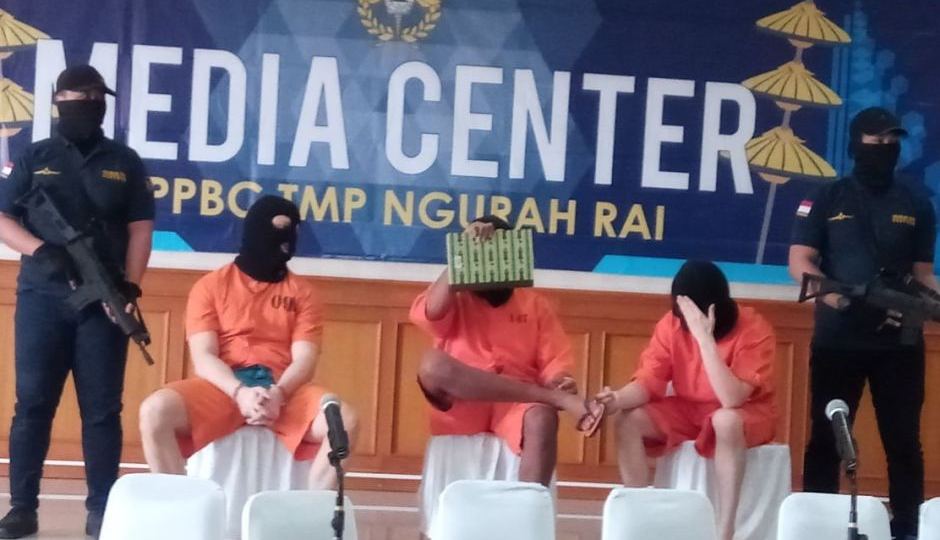 A Brisbane accountant and self-confessed drug addict allegedly caught with drugs at Bali’s international airport has reportedly been hospitalised after being paraded in front of media by police.

Dressed in orange prison garb with his face covered by a balaclava, Isaac Emmanuel Roberts was presented to the media on Tuesday, along with two men from Malaysia and the United States arrested over separate allegations.

Roberts claimed he was an addict and it was “ridiculous” that he had been arrested.

According to local authorities, he could face the death penalty if found guilty.

He was arrested on December 4 after arriving from Bangkok while allegedly carrying 19 grams of amphetamine and ecstasy pills.

Robert’s lawyer Deni Sedana said the 35-year-old had become sick on Tuesday evening after the press conference and was admitted to Trajata police hospital.

He said his client often felt depressed and had a mental disorder.

“He has a long history of drugs. He has medical records from Australia, where he was treated for drugs.”

Earlier, Roberts had been angry at being paraded in front of the media and suggested he’d been set up by authorities.

“I was invited to this country. I was working with a Customs officer and they knew I was going to bring something,” he said.

“I’m just a f–––ing addict, they want to waste their resources on addicts. They want to punish addicts, this is ridiculous. What about the f–––ing importers? I wasn’t going to sell it to anyone here, no one was going to use it here.”

Roberts said Indonesian police were parading small-time users in front of media when there were “kilos going through this airport”.

Indonesian customs officials claimed the drugs were hidden in a plastic bottle and another container in the 35-year-old’s luggage.

“Based on the results of the inspection, our officers found five packages containing clear crystals weighing 19.97 grams and 14 tablets weighing a total of 6.22 grams,” Bali Airport customs office chief Himawan Indrajono said in a statement.

An accountant formerly based in Brisbane’s Fortitude Valley, Roberts’ business website hasn’t been updated since 2015 when he faced the professional conduct tribunal of Chartered Accountants Australia and New Zealand.

The tribunal decided on November 15 of that year that Roberts had failed to reply to correspondence, issuing him with a reprimand and fining him $3100.

The execution by firing squad of two Australians in 2015, along with six other drug convicts from several other countries, strained relations between Jakarta and Canberra.

Indonesia says it is facing a drug crisis with an estimated 6.4 million drug users in the country of 250 million people, and needs to impose tough punishments to contain the problem.