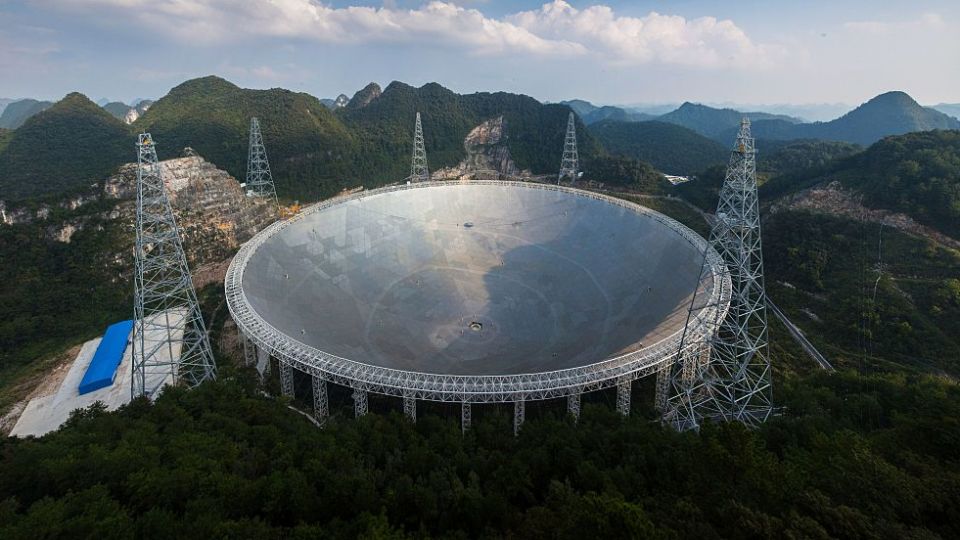 A piece of advanced Australian technology is being installed on the world’s largest radio telescope in China – highlighting science as a bright spot amid rocky relations with China.

The 19-beam receiver – the largest yet built – is undergoing final testing before installation at the 500-metre Aperture Spherical Telescope (FAST) in southern Guizhou province.

The massive telescope, built in remote hills more than two hours from the nearest city, started operations last September after five years of construction and many more of planning.

But it will rapidly accelerate its observations of the universe once the new CSIRO-made device is hoisted above the 4500 panels of the dish.

“The 19-beam receiver system can broaden the field of view of the telescope and can greatly increase the speed with which we do surveys,” said Dr Fan Jin, an electronics engineer with the FAST project.

The CSIRO’s expertise in telescope technology secured the Australian involvement in the project.

“The CSIRO has very good experience in building receivers and we want to ensure the technology we use for this satellite is proven and reliable,” said Dr Liu Hongfei, another engineer working with China’s National Astronomical Observatories body NOAC.

Scientists operating the telescope say its size – almost 200 metres wider in diameter than the next largest radio telescope – will mean faster discoveries of new pulsars, rotating neutron stars that emit bursts of radiation.

“This telescope certainly has the opportunity to basically discover whatever is up there emitting radio waves, and obviously that could include extra-terrestrial intelligence.”

The NOAC has collaborated with other countries, including the US and UK, on the telescope in a bid to create world-leading technology.

“China is booming ahead – the amount of investment in science and technology is absolutely huge,” Dr Hobbs said.

Since it first began operating, FAST has discovered two new pulsars which have been verified by Australian experts at the Parkes telescope in New South Wales.

To date, the Parkes telescope has discovered more than half of roughly 2000 known pulsars, and it will continue to help verify and monitor new discoveries from FAST.

The co-operation continues a long-established relationship between the CSIRO and China’s national science body.

“Astronomy is a very open field, a very collaborative field,” Dr Hobbs said. “And we’ve always had a great collaboration with both the Chinese and the Australian communities.”