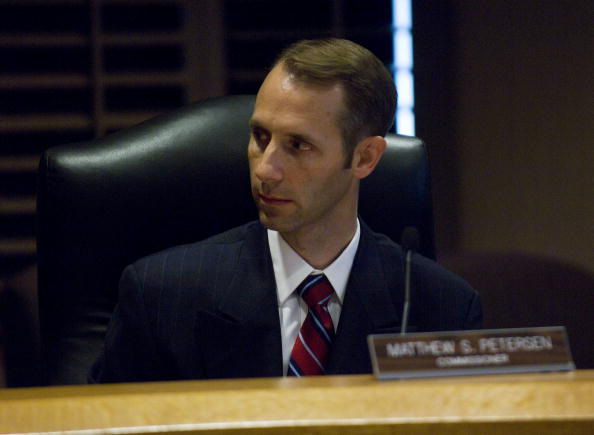 Matthew Petersen admitted he had never tried a case to verdict. Photo: Getty

Footage of one of Donald Trump’s picks to become a federal judge struggling through a five-minute legal grilling has gone viral after the nominee failed to exhibit what experts have described as basic legal knowledge.

The cringe-worthy video watched by almost six million people features Matthew Spencer Petersen, nominee for the circuit court of the District of Columbia, revealing an astonishing lack of courtroom experience.

“I understand the challenge that would be ahead of me if I were fortunate enough to become a district court judge,” Mr Petersen said.

“I understand that the path that many successful district court judges have taken is different than I have taken.”

Mr Peterson, a member of the Federal Election Commission, was nominated by Mr Trump for a coveted lifetime appointment as a federal district court judge. The primary task of a federal court judge is to try cases.

“Hoo-boy,” Senator Whitehouse captioned the video, which has since received more than 70,000 retweets.

During the questioning, Mr Kennedy asked Mr Petersen if he had participated in a deposition, to which he replied he’d been involved in around five, but had never performed one independently.

Mr Petersen continued to ‘um and ‘ahh’ as Mr Kennedy discovered the nominee could not remember the last time he had read the ‘Federal Rules of Civil Procedure’.

“In my current position, I obviously don’t need to, um, you know, um, be invested in those on a day-to-day basis, but I do try to keep up to speed,” Mr Petersen stammered.

As Mr Petersen went on to discuss his role at the Federal Election Commission, Mr Kennedy decided to interrupt and asked when was the last time he had read the ‘Federal Rules of Evidence’.

“The Federal Rules of Evidence all the way through, would be, um, comprehensively would have been in law school,” Mr Petersen said.

“Do you know what a motion in limine is?” Mr Kennedy asked Mr Peterson.

“Again, my background is not in litigation … I appreciate this line of questioning … but I believe that the path I have taken to be in a decision-making role on, I guess, somewhere between 1500 to 2000 enforcement matters, overseeing I don’t know how many cases in federal court …” Mr Peterson rambled in response.

“Yes sir, I’ve read your resume,” Mr Kennedy interrupted. “Just for the record, do you know what a motion in limine is?”

“I would probably not be able to give you a good definition right here at the table,” Petersen answered.

MUST WATCH: Republican @SenJohnKennedy asks one of @realDonaldTrump’s US District Judge nominees basic questions of law & he can’t answer a single one. Hoo-boy. pic.twitter.com/fphQx2o1rc

Mr Peterson worked as a junior associate at a major Washington law firm for three years after graduating law school in 1999.

Mr Peterson’s failure to answer Mr Kennedy’s requests to define legal terms, such as a ‘motion in limine‘ and the case that spawned the ‘Younger abstention doctrine’ have shocked legal experts.

“I was so shocked and appalled I couldn’t believe it,” Joel Friedman, a law professor at Tulane University, told the Advocate.

A White House spokesperson told CNN it was “no surprise” Mr Trump’s opponents were trying to distract from the record-setting success the President has had on judicial nominations.

The video comes just as Mr Trump set a new record for the number of judicial nominees confirmed in a president’s first year, successfully appointing 12 so far.