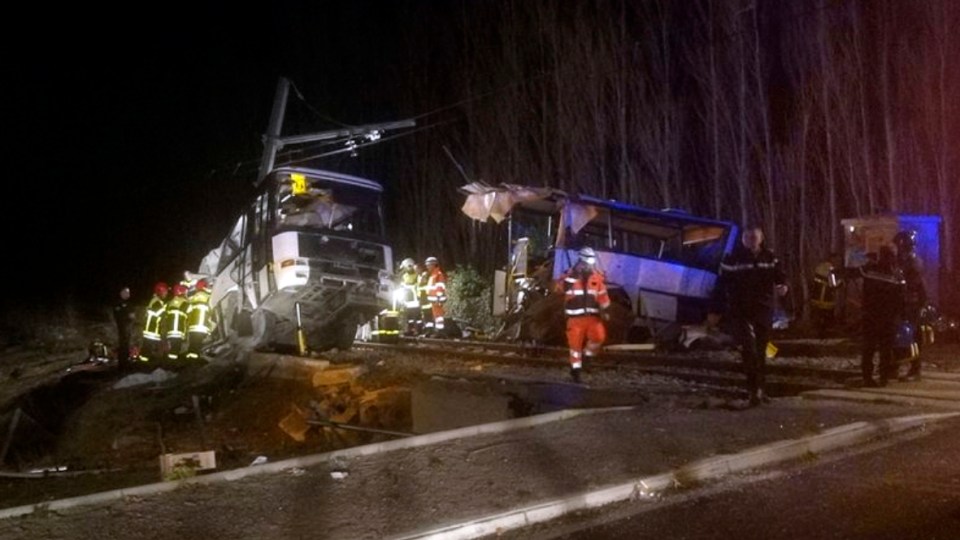 The school bus was carrying childrenaged between 13 and 17 years. Photo: AP

At least four children are dead and as many as 19 are injured after a train and a school bus collided outside the town of Perpignan in southwestern France.

TV images showed a long line of ambulance and emergency service vehicles near the crossing where the collision occurred on Friday morning (AEST).

Prime Minister Edouard Philippe described the crash as a “terrible accident” and said on Twitter he was heading to the scene, more than 850 km from Paris.

“All emergency services have been mobilised and a crisis coordination unit set up,” an official at the local Millas townhall told Reuters.

In a tweet, French President Emmanuel Macron said: “All my thoughts for the victims of this terrible accident involving a school bus, as well as their families. The state is fully mobilised to help them.”

The interior ministry said seven people in the bus, which was carrying teenagers aged between 13 to 17, were seriously injured among the 19 aboard.

Around 70 emergency workers and four helicopters were deployed as part of the rescue effort.

An SNCF spokeswoman said the train was running at 80 kilometres an hour at the time of the accident and 25 people were on board. Three of those were slightly injured.

A witness on the train, who gave her name as Barbara, told the BBC “it was a very violent crash – it seemed as if the train would derail”.

France has suffered several train incidents in the past few decades.

In 2013, a train derailment in central France killed at least six people. One of the deadliest was in 1988, when a commuter train heading into Paris’ Gare de Lyon crashed into a stationary train, killing 56 people, after its brakes failed.