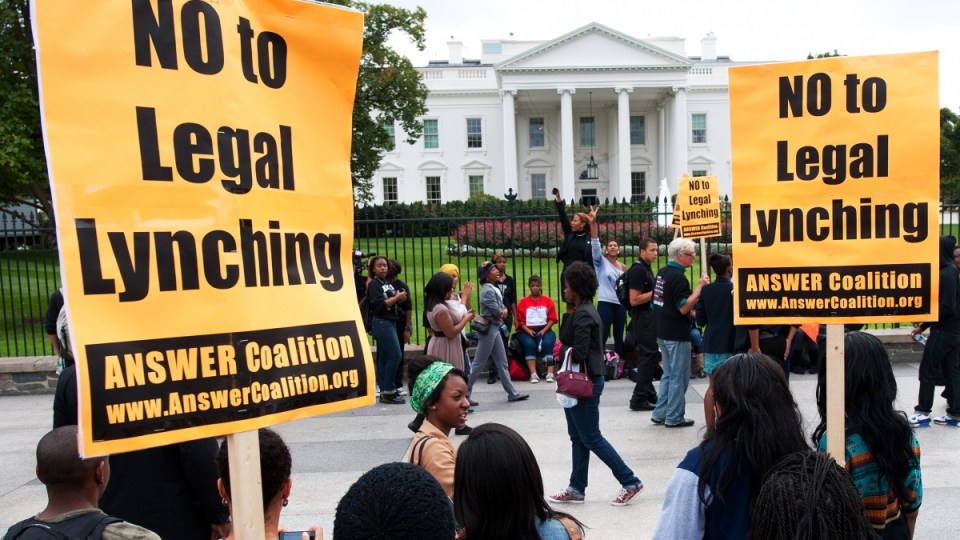 Students protesting against the death penalty outside the White House. Photo: Getty

Isn’t there a peaceful way to put a killer to sleep for good?

As Victoria celebrates the passing of voluntary assisted dying legislation – protocols for a dignified, pain-free death for terminally ill people – prisons in the United States are struggling to find a guaranteed, humane way to kill death-row inmates without causing them horrific pain and prolonged suffering.

Critics say prisons are virtually experimenting on prisoners in the hope of finding a reliable, humane killing method.

Lethal injection was meant to be the gentle bye-bye method that would avoid the horrors of a prolonged gas-chamber choking or painful under-cooking in the electric chair.

In fact, it’s by far the most botched method of execution in the nation’s history. And for some years now, US drug manufacturers – and those overseas – have refused to sell drugs used in lethal injection to prisons, notably an anaesthetic called sodium thiopental.

Last year, pharmaceutical giant Pfizer told The New York Times that it had imposed sweeping controls to ensure that none of its products were used in lethal injections: “A step that closes off the last remaining open-market source of drugs used in executions.”

In an email to The New Daily, Robert Dunham, executive director of the Death Penalty Information Center in Washington D.C., noted: “That is why states are going to great lengths – trying to import drugs from abroad, adopting drug secrecy laws, misleading drug distributors about why they need the drugs they are trying to buy – to try to obtain whatever drugs may be available.’’

According to the Death Penalty Information Center figures, lethal injection is more than twice as likely to go bad than a hanging, and more than three times as likely than electrocution.

Mr Dunham said: “Lethal injection is botched the most because it is essentially a medical procedure, but medical personnel don’t want anything to do with it. So it is carried out by prison employees who lack the knowledge and training to deal with unexpected circumstances.’’

Some states hope to abandon the needle, and are casting around for new and old methods.

Alabama and Oklahoma intend to try nitrogen asphyxiation. Nitrogen makes up 78 per cent of the air we breathe. But without the 20 per cent of oxygen, one good inhalation of pure nitrogen would cause you to immediately pass out. Death soon follows. That’s the theory.

Nevada and Nebraska – two of the 31 US states that allow the death penalty – are seeking an answer in the country’s horrendous opioid crisis, where 60,000 Americans died from overdoses in 2016.

Half of those deaths were from the synthetic opioid fentanyl, routinely described as 50 times stronger than heroin. If it’s so easy to lethally overdose on fentanyl, the thinking goes, surely prisoners will be delivered from this life in similar ease and comfort.

But because the fentanyl would be administered with two other drugs, including a paralytic, doctors and researchers told The Washington Post, there’s a risk that an inmate could appear to be at peace, but in fact be struggling desperately for breath. Drowning, not moving.

Mark Heath, a professor of anaesthesiology at Columbia University, told the Post: “It would be an agonising way to die, but the people witnessing wouldn’t know anything had gone wrong because you wouldn’t be able to move.”

There’s talk of bringing back the firing squad because death is said to be almost instant, and official figures claim it has never been botched.

In May, J.W. Ledford, Jr, a convicted murderer sued the State of Georgia to have his death administered by a firing squad execution – because he feared a lethal injection would be too painful.

Scott Dozier, on death row in Nevada for a robbery killing and scheduled to become the first prisoner to die a state-sanctioned death by fentanyl, is also asking he be given a firing squad. A judge last month put a stall on the execution, because of concerns about the paralytic drug. Fentanyl seems clear to go.

If fentanyl somehow fails, presumably other drugs will be tried. But options are limited.

Deborah W Denno is a professor of law at New York’s Fordham University, and a long-time researcher of executions gone wrong.

“We botched electrocutions and gas executions horribly. That’s how we got to lethal injections … and done an even worse job.”

Speaking by telephone from New York, Professor Denno described herself as “agnostic” on the righteousness of the death penalty – but finds “unacceptable” that the US continues to repeat a terrible history of getting executions wrong.

In trying to solve that problem, she said prisons are “experimenting” on prisoners by trying out different drugs that are normally used in a medical or surgical context.

She said that “people will do a better job of accidentally killing themselves with fentanyl than prison staff trying execute prisoners deliberately”.

Professor Denno believes the most humane option is the firing squad.

“The only thing we haven’t botched is firing squad executions. They’ve been carried off without a hitch … but people don’t like that because it reminds them too much of death. They want to disguise it.”

“The problem with changing methods of execution is, apart from lethal injection, the US public believes that every one of the alternatives is too gruesome or cruel to be acceptable.”