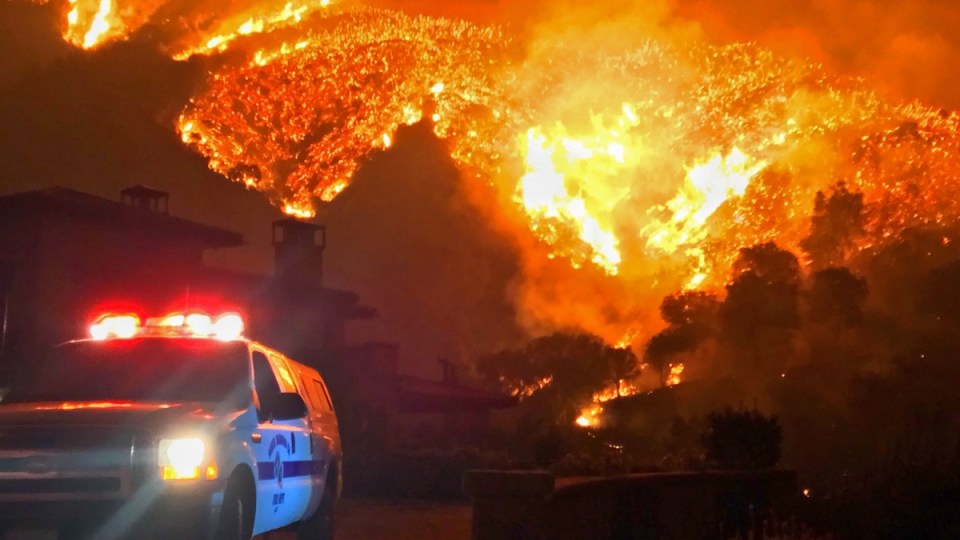 Cory Iverson was working with a state fire engine strike team when he was killed. Photo: AAP

A firefighter has died while battling a massive wildfire burning in coastal mountains northwest of Los Angeles that has become the fourth largest in California history.

Cory Iverson, 32, had been an engineer with a state fire engine strike team based in San Diego since 2009.

He is survived by his pregnant wife and a two-year-old daughter, Fire Chief Ken Pimlott of the California Department of Forestry and Fire Protection told reporters at an afternoon news conference.

Pimlott did not provide any details about the death but said it was under investigation by an accident review team.

Iverson is survived by his pregnant wife Ashley and their 2-year-old daughter. https://t.co/J0WaZNPpgH pic.twitter.com/ACERROUF18

Pimlott said he was “deeply saddened” by Iverson’s death but added that fire crews were continuing to focus on their mission.

“The firefight in front of us continues to go on. The communities we are protecting are depending on us and we will not fail,” he said.

Last week, a 70-year-old woman was killed in a car crash while evacuating as the fire raged last week.

Her body was found inside the wrecked car along an evacuation route.
A return of gusty Santa Ana winds brought renewed activity to inland portions of the so-called Thomas Fire straddling coastal Ventura and Santa Barbara counties.

Authorities said it now covered 982 square kilometres. That surpassed a blaze that burned inland Santa Barbara County a decade ago.

Firefighting costs so far were tallied at $74.7 million, according to Cal Fire.

Some evacuations were lifted and the risk to the agricultural city of Fillmore was diminishing.

But coastal enclaves to the west remained under threat as crews protected hillside homes in Montecito, Summerland and Carpinteria.

Schools were closed and many roads remained shut down.

The USA Water Polo Women’s National Team match against the Netherlands scheduled for Saturday in Santa Barbara was moved to Orange County.

The National Weather Service said extreme fire danger conditions could last through the weekend due to lack of moisture along with a likely increase in wind speeds.

Firefighters made some progress Wednesday on corralling the fire, which continued to spread mostly into national forest land.

Since the blaze broke out on December 4, it has burned destroyed 970 buildings – including at least 700 homes. Flames threatened some 18,000 buildings and prompted evacuations of about 100,000 people.

Covering more ground than the city of San Diego, it was 30 percent contained.