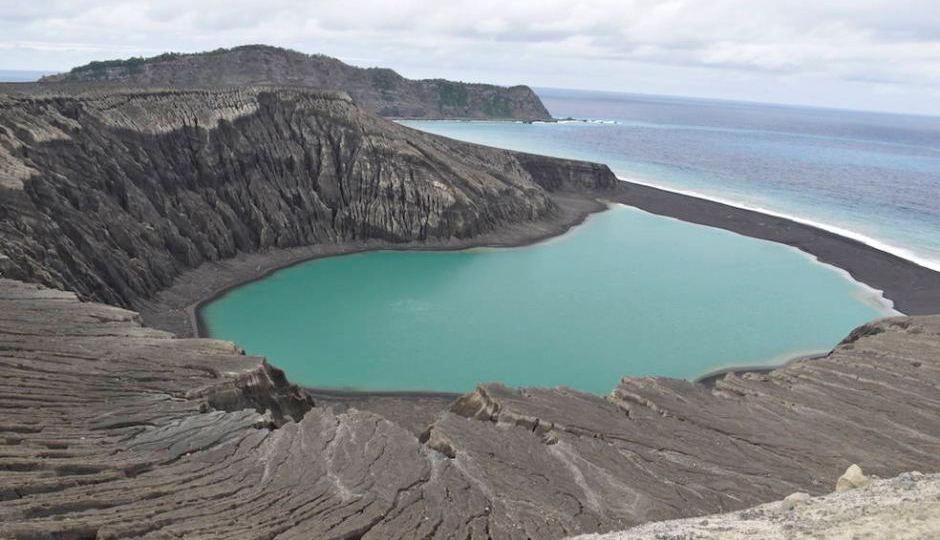 The eruption left behind a small island with this cone made of what scientists call 'tuff' material. Photo: NASA

When the Hunga Tonga Hunga Ha’apai volcano erupted off the coast of Tonga in 2015, shooting rocks and lava into the sky, scientists did not expect the land mass it formed to last.

But three years later, the island left behind by the explosion is still standing.

Although volcanic eruptions in the ocean are not uncommon, it is rare for an island to form, and even more rare for it to last.

Hunga Tonga Hunga Ha’apai is the first such formation to erupt and persist since satellite technology grew powerful enough to track them.

“It really felt like we were witnessing something that nobody else had seen,” said Vicki Ferrini from Lamont-Doherty Earth Observatory at Columbia University.

Ms Ferrini was one of the first scientists to inspect the new island, and has been a part of the team tracking it.

“There’s a huge amount of material that came out from this eruption,” she said.

A team including members of the Observatory and NASA has used satellite imagery to map the transformation of the island over time, using monthly images taken with optical sensors and radar.

They have mapped two possible life spans for the 120-metre-tall body: in one, it could be eroded by waves in six years, and in the other, it could stay intact for 25-30 more years.

Perhaps the most useful element of the research has been applying the discoveries from Hunga Tonga Hunga Ha’apai to outer space.

Scientists say there are fields of similar volcanos on Mars, and studying the Tongan volcano could tell them more about how the red planet formed.

“Because that landscape survived beyond two months, which was really the common wisdom by experts, it allowed us to watch a new landscape go through its life cycles in ways we don’t often get,” Jim Garvin told the ABC’s Pacific Beat program.

Mr Garvin, who is chief scientist of NASA’s Goddard Space Flight Centre, thinks the conditions on the island are perfect for the formation of microbial life.

“We’d love to find those kinds of things on Mars. Because where there is water, particularly hot water, and rock, the opportunity for microbial life to spring forth is commonplace here on Earth,” he said.

“This is the lifestyle of an island evolving in space and time, and we study these to understand Earth, and to extend that understanding to Mars.”