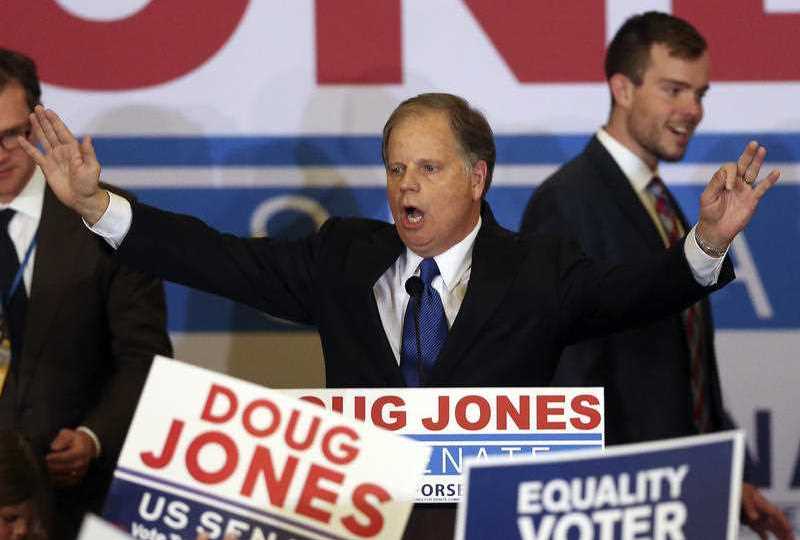 In a stunning repudiation of President Donald Trump’s political power sure to reverberate around the United States, Alabama voters have rejected the controversial Republican Senate candidate Roy Moore in favour of a Democrat — the first time the deeply conservative state has elected a Democrat in 25 years.

By a razor-thin margin, Doug Jones, a former federal attorney, beat Mr Moore, a brash former state chief justice, by about 21,000 votes from a total of more than 1.3 million cast on Wednesday (AEDT).

The campaign – though confined to a small, poor state in the heart of the old Confederacy – had become a national referendum on Mr Moore, whose campaign was engulfed by allegations he preyed upon teenage girls in his 30s while working as a local attorney.

In an election that trims the Republican majority in the Senate to a single vote, Alabama—one of the most evangelical Christian states in the US— dealt a serious blow to Mr Trump’s shrinking political influence.

At the same time, the results buoyed Democrats nationwide, who just weeks ago could not have dreamed of winning a seat so deep in Dixie, where conservative Republicans have reigned since the 1970s.

The vote raises hopes that Democrats can reclaim not only the Senate, but also the House of Representatives, all of whose 435 members are up for re-election in 2018.

Mr Moore, a bible-thumping judge whose medieval views on everything from slavery to same-sex marriage predate the revelations about his alleged proclivity for teenage girls, was seen as a pariah by establishment Republicans from the start.

The national Republican Party refused to support him (it later relented), and the state’s senior senator, GOP stalwart Richard Shelby, declared on Sunday that he could not support his fellow Republican – an extraordinary repudiation in a state that hasn’t elected a Democrat to statewide office since 1992.

“We can do better,” Senator Shelby declared.

Congratulations to Doug Jones on a hard fought victory. The write-in votes played a very big factor, but a win is a win. The people of Alabama are great, and the Republicans will have another shot at this seat in a very short period of time. It never ends!

Some worried the invasion of national Democratic figures could turn off Alabamians, for whom the memory of northern “freedom riders” coming to the state during the civil rights era of the 1960s is still sensitive. But in the end, the effort paid off.

The race, defined by allegations that Mr Moore dated — and in some cases groped — teenage girls as young as 14 during the 1970s, became a national obsession in recent weeks.

It was seen as both a referendum on the length of Mr Trump’s political reach as well as the electoral potency of sexual harassment claims that have exploded through the media, entertainment industry and politics during the past two months.

Mr Moore, who essentially went underground last month after the allegations erupted, has been a buffoonish character for years. He has been twice suspended from his duties as a judge – once for refusing to remove a Ten Commandments monument from a courthouse, the other for instructing his fellow judges to ignore federal laws regarding same-sex marriage.

His hillbilly bona fides were always guaranteed to attract snickering national media coverage. But the revelations about his predatory behaviour raised the stakes.

The broader implications of Mr Jones’ win were still being weighed last night, but it was universally viewed as devastating news for Mr Trump, whose personal approval rating is at historic lows for a President this early in an administration.

Mr Trump, who had backed Mr Moore’s primary opponent last summer, came out strongly for Mr Moore in recent weeks, appearing at a rally this weekend in nearby Florida and recording a “robocall” on his behalf on Sunday.

He labeled Mr Jones, a former US attorney who successfully prosecuted Ku Klux Klan members involved in the infamous 1960s-era bombing of a Birmingham church that killed four girls, as “terrible on crime”.

Mr Jones’ victory was powered by surprisingly large turnouts in suburban districts surrounding the state’s largest cities, as well as a very strong results in the state’s predominantly African-American counties, where so many of the US’s civil rights battles were fought during the 1960s.

Last night’s vote, in such a normally reliable “red state,” was seen as a stark comment on the limits of his influence, and a sign that Republicans might soon abandon the president in hopes of salvaging their own reelections in 2018.

Perhaps most seriously for Mr Trump, Mr Moore’s loss last night was clearly ascribed to the sexual allegations against him. That such allegations held such sway in this deeply religious and conservative state can only spell trouble for Mr Trump, who has been accused by as many as 16 women of sexual harassment and assault.

Larry Hackett is the former editor in chief of People magazine, and a current contributor to the US morning television news program Good Morning America