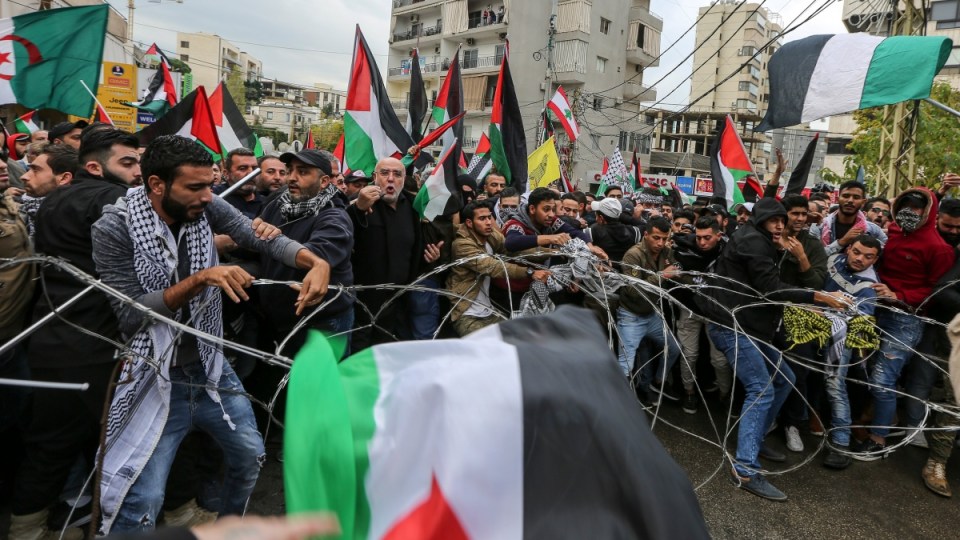 The backlash continues from US President Donald Trump's decision to recognise Jerusalem as the capital of Israel, with protests, a stabbing and air strikes. Photo: AAP

Lebanese security forces have clashed with protesters near the US embassy in Beirut as the backlash over US President Donald Trump’s recognition of Jerusalem as Israel’s capital spreads throughout the Middle East.

Mr Trump’s announcement on Wednesday to overturn seven-decades of US policy on Jerusalem has drawn warnings across the Muslim world of potential damage to prospects for Middle East peace.

As Palestinian protests in Jerusalem entered their fourth day, a security guard was in critical condition after a 24-year-old Palestinian man from the occupied West Bank stabbed him after approaching a metal detector at an entrance to the city’s central bus station.

The alleged assailant was taken into custody after being tackled by a passer-by.

In Beirut, Lebanese security forces fired tear gas and water canons at protesters, some of them waving Palestinian flags, near the US embassy.

Demonstrators set fires in the street, torched US and Israeli flags and threw projectiles towards security forces that had barricaded the main road to the complex.

Protesters told CNN they condemned Mr Trump’s decision on Jerusalem’s status, and said they were angry at the “impotence” of Arab leaders in the wake of the controversial decision.

“Sheep who are the Arab leaders betrayed Jerusalem years ago,” Mustafa, a Syrian demonstrator, told CNN.

Arab foreign ministers who met in Cairo on Saturday urged the US to abandon its decision on Jerusalem and warned the move would spur violence throughout the region.

Abu Dhabi Crown Prince Sheikh Mohammed bin Zayed al-Nahayan said the US move “could throw a lifebuoy to terrorist and armed groups, which have begun to lose ground” in the Middle East.

Along Israel’s tense frontier with the Gaza Strip, the Israeli military on Sunday destroyed what it described as a “significant” cross-border attack tunnel dug by the enclave’s dominant Islamist group, Hamas.

Israeli airstrikes in the Gaza Strip on Saturday killed two Palestinian gunmen after militants fired rockets from the area into Israel on Friday.

In the Indonesian capital Jakarta on Sunday, thousands protested outside the US embassy.

Leaders in Indonesia have joined a global chorus of condemnation of President Trump’s announcement, including from Western allies.

Israeli Prime Minister Benjamin Netanyahu reacted to critics in a statement before talks with French President Emmanuel Macron in Paris on Sunday.

“I hear (from Europe) voices of condemnation over President Trump’s historic announcement, but I have not heard any condemnation for the rocket firing against Israel that has come (after the announcement) and the awful incitement against us,” Mr Netanyahu said.

In another possible response to the Jerusalem move, police have been forced to guard Jewish centres across the Swedish city of Gothenberg following an arson attack on a synagogue.

Police spokeswoman Ulla Brehm said burning objects were thrown into the yard of the synagogue, causing a fire.

Ms Brehm said approximately 10 people dressed in black were seen running away after throwing the objects.

No one was injured in the attack.

Violent protests erupt near US embassy in Beirut