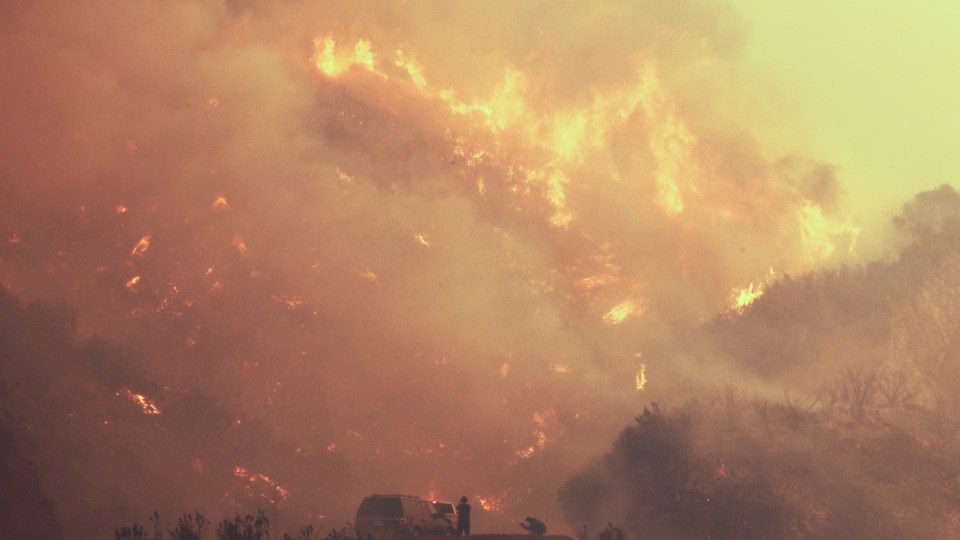 While more than 200,000 Americans flee their homes as wildfires ravage California, a viral video of a man saving a wild bunny hopping into the flames has captivated the web.

The video shows an unidentified man, wearing only shorts and a hooded jumper, walking along the Ventura County highway near La Conchita, which is engulfed in sky-high flames.

When the man spots the wild rabbit darting into the burning brush, he panics, grasps his face in his hands and jumps into the air, before walking toward the flames to rescue the animal.

Calling for the rabbit to come towards him, he picks up the creature and hoists it into the safety of his arms before continuing to walk along the highway.

The man, labelled a ‘hero’ by news outlets and social media users alike, has declined interviews, but his actions have boosted the spirits of those fighting the relentless blaze.

Witnesses say this man pulled over to save a wild rabbit from flames along Highway 1 in Southern California as the massive #ThomasFire spread toward Santa Barbara County. https://t.co/lTjWZPrtxB pic.twitter.com/1MjXo2pzs8

One Twitter user said, “If you need your faith in humanity restored just watch this video of a man saving a wild bunny from the #LAFires.”

US President Donald Trump declared a ‘state of emergency’ in California on Friday (US time) as close to 6000 fire fighters continue to battle intense wind-driven wildfires across the south of the state.

Mr Trump has asked for federal assistance, including the Federal Emergency Management Agency and the Department of Homeland Security to help the “suffering” local populations in Los Angeles, Riverside, San Diego, Santa Barbara and Ventura counties.

“The southern California fires, the Thomas fire in Ventura County and the Creek and Rye fires in Los Angeles County, have been raging and swiftly heading toward areas that are heavily populated and full of rich history,” the FEMA department said in a statement.

“However, those facts don’t matter to fires.”

A total of six active fires have singed 65,000 hectares across the region, according to CalFire, the leading California fire authority.

At least 500 structures have been destroyed with billions of property at risk as strong Santa Ana winds continue to fuel the fires into southern California.

Fire officials have said containing the fires will be a long process given the persistent dry conditions.

CalFire reported a new fire in San Diego Country started on Thursday (US time) and burned 1660 hectares and has yet to be contained.

Mandatory evacuations in the area are in place with recommendations large animals will be relocated.

On Friday, the first fire-related death was confirmed by the Ventura County medical examiner’s office.

Virignia Pesola, 70, of Santa Paula, was found dead along an evacuation route near a fire northwest of Los Angeles. Her death was caused by crash injuries, smoke inhalation and burns, the medical examiner’s office said in a statement.