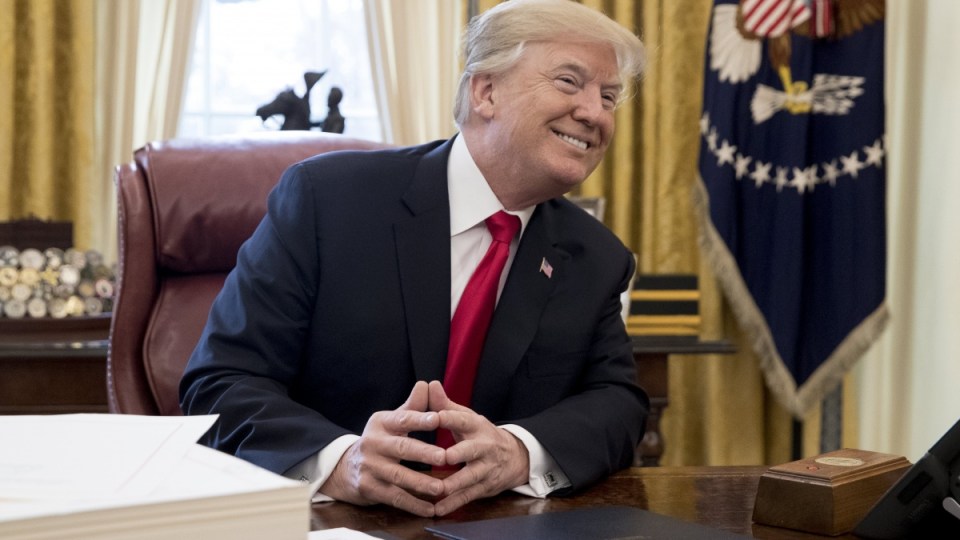 Donald Trump spoke for a whopping 80 minutes at a Florida rally. Photo: Getty

US President Donald Trump has delivered a bizarre, wide-ranging speech at a Florida rally, imitating German leader Angela Merkel, throwing support behind scandal-plagued US senate candidate Roy Moore and touting his achievements in his first year of office.

During his 80-minute speech in Pensacola, Florida, on Friday (US time) Mr Trump spoke of a closed-door meeting with Justin Trudeau and accused Arnold Schwarzenegger of “bombing” on his show Celebrity Apprentice.

“I like the prime minister very much,” Mr Trump told the raucous rally crowd of Mr Trudeau.

“[Trudeau] said, ‘I’m telling you that Canada has a deficit with the United States.’ I told my people — in front of a lot of people — I said, ‘Go out and check’.

“[Trudeau] was right. Except he forgot two categories: Lumber timber; and energy. Other than that, he was right. When you add them all together, we actually have a $17 billion deficit with Canada.”

Of Schwarzenegger, Mr Trump went off topic to say: “I can’t believe that Arnold Schwarzenegger bombed so badly on The Apprentice, my poor beautiful show.”

Mr Trump praised his administration’s success in “taking care of our citizens at home” by defeating the Islamic State abroad and expelling violent street gang members from the US.

“You don’t even want to say ‘people’,” Trump said. “These are savage killers over there, but we sure as hell don’t want them to come over here.

“America is being respected again abroad and we are taking care of our citizens at home, and we’re going to have safety and we have a lot more now,” said the president, who appeared buoyed as he headlined his first campaign rally in more than two months.

“We need somebody in that Senate seat who will vote for our ‘Make America Great Again’ agenda … So get out and vote for Roy Moore. Do it. Do it.”

The White House said the rally was a campaign event for Mr Trump. But the location, near the Alabama border and feeding television markets in the state, stoked speculation that the rally was a backdoor way for the president to give Mr Moore’s campaign a boost without actually setting foot in the state.

Mr Moore, 70, has been dogged by multiple allegations of sexual misconduct, including accusations that he molested two teenage girls and pursued romantic relationships with several others while in his 30s. He has denied the allegations.

While Mr Trump’s supporters lauded his speech, which he hoped would “cut through the fake news media”, journalists in attendance at the rally said it was “all over the place”.

I've been to my fair share of Trump speeches. This one is so out of whack and all over the place I can't believe it.

"I must tell you I can't believe Arnold Schwarzenegger bombed so badly on the Apprentice," Trump says, out of seemingly nowhere. "My beautiful show…"

The speech came as one poll placed Mr Trump’s approval at an all-time low.

The poll, conducted by the Pew Research Center, found Mr Trump’s approval rating fell to 32 per cent in November, with 40 per cent of his supporters saying he’d done things that had proven disappointing, according to Time magazine.

Earlier this week, there were concerns for the President’s health after he slurred his words during a speech at the White House.

Trump’s strangest speech yet? President ‘all over the place’ at Florida rally