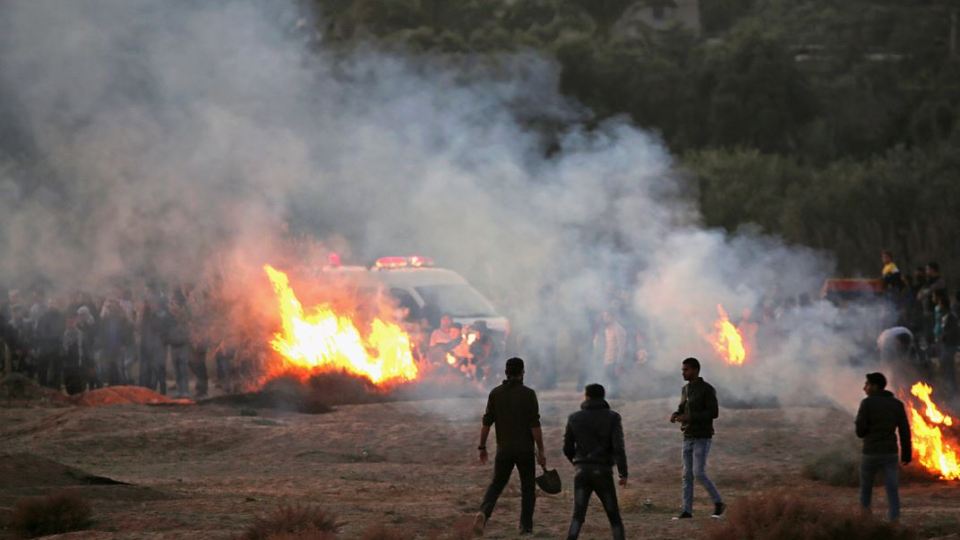 A mounting wave protest and anger has erupted across the Muslim world in the aftermath of US President Donald Trump’s decision to recognise Jerusalem as the capital of Israel.

Scores of people have been injured during violent clashes between Palestinian protesters and Israeli security forces in the West Bank cities of Hebron, Bethlehem and Ramallah.

And for the first time in more than two years, rocket attacks were launched from Gaza.

Israel responded immediately with a wave of airstrikes.

Hamas, which controls Gaza, said in a statement that two of its gunmen have been killed in the bombings.

A jihadist Salafi group in Gaza, the Al-Tawheed Brigades – which does not heed the call from the enclave’s dominant force, Hamas, to desist from firing rockets – claimed responsibility for the launches.

Militants fired at least three rockets toward Israeli towns on Friday (local time), which was declared a “day of rage” by Palestinian factions.

Two more Palestinians were killed in clashes with Israeli troops on the Gaza border, while scores more were wounded there and in the occupied West Bank.

Across the Arab and Muslim worlds, thousands more protesters took to the streets on the Islamic holy day to express solidarity with the Palestinians and outrage at Trump’s reversal of decades of US policy.

In Indonesia, demonstrators converged on the US embassy in Jakarta, capital of the world’s biggest Muslim-majority country.

“We’re standing here in the name of justice and humanity. We’ve gathered to defend our Palestinian brothers and sisters,” a rally leader said.

The US embassy in Jakarta advised its citizens to avoid demonstrations and said its consulate in Indonesia’s second-biggest city of Surabaya had suspended public services on Friday.

In Bangladesh, about 3000 people gathered in front of the main mosque in the capital, Dhaka, to protest.

In Indian-administered Kashmir, small groups of people protested in Srinagar, the capital of the Muslim-majority region.

“We condemn the idiot Trump’s decision,” said a placard on an effigy of the US president.

The status of Jerusalem has been one of the biggest obstacles to a peace agreement between Israel and the Palestinians for generations.

Israel considers all of Jerusalem to be its capital. Palestinians want the eastern part of the city as the capital of a future independent state of their own.

Most countries consider East Jerusalem, which Israel annexed after capturing it in the 1967 Middle East War, to be occupied territory. It includes the Old City, home to sites considered holy to Muslims, Jews and Christians alike.

For decades, Washington, like most of the rest of the international community, held back from recognising Jerusalem as Israel’s capital, saying its status should be determined as part of the Palestinian-Israeli peace process.

The Trump administration argues that the peace process has become moribund, and outdated policies need to be jettisoned for the sides in the conflict to make progress.

Trump also said he would fulfil his campaign promise and begin the process of moving the US embassy from Tel Aviv to Jerusalem, where no other country has an embassy.

The clashes began on Friday (local time) after midday to the soundtrack of protesters chantting, “Death to America! Death to the fool Trump!”

In Bethlehem, masked youths burned tyres and threw stones at Israeli troops who responded with tear gas in a bid to disperse the crowd.

There were also protests in Ramallah where several people have been detained.

Thousands of Palestinian worshippers also rallied outside Jerusalem’s Al Aqsa Mosque, a chronic flashpoint in the holy city that sits atop the Western Wall sacred to Jews.

A jihadist Salafi group in Gaza called the Al-Tawheed Brigades – which does not heed the call from the enclave’s dominant force, Hamas, to desist from firing rockets – claimed responsibility for the launches.

Even Jordan, a staunch US ally, has dismissed Mr Trump’s move as “legally null”.