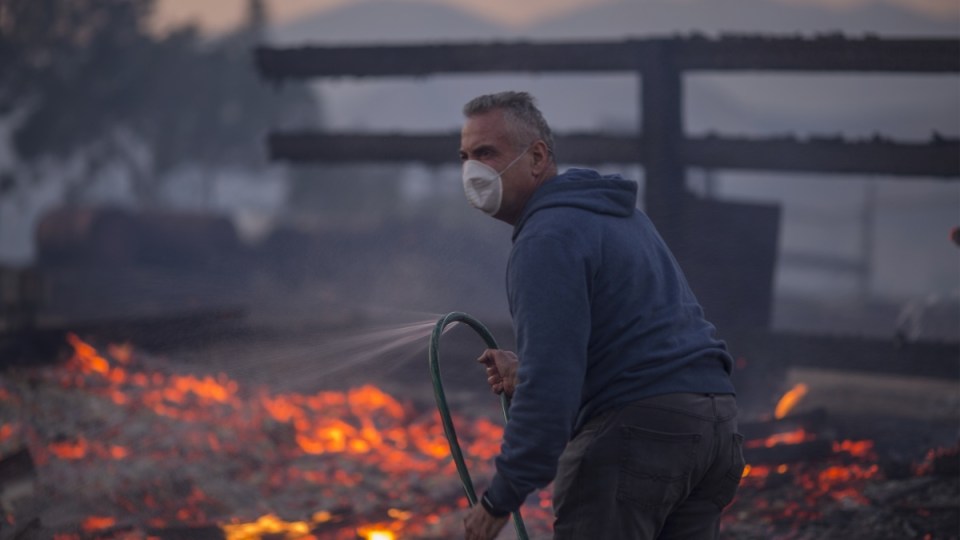 A resident holds a leaking hose on his burning property in Sunland, California. Photo: Getty

Wildfires have devastated parts of southern California, destroying hundreds of homes and triggering the evacuation of 200,000 people.

Officials say at least 439 homes and other buildings have been destroyed by the wildfires burning north-east of Los Angeles.

The wind-whipped blaze has burned nearly 466 square kilometres in Ventura County stretching from hilly forests to the Pacific Ocean and is only 5 per cent contained.

Officials on Thursday (US time) said they had made good progress battling much of the fire but that thousands of homes remain in jeopardy.

The United States National Weather Service has issued a ‘red flag’ warning of extreme fire behaviour to occur over the next day with ‘watches’ issued for Santa Barbara, Los Angeles, San Diego, as well as the neighbouring state of Arizona.

Six major fires are raging across homes, roads and land in Los Angeles, Ventura County and San Diego with hot and dry winds exceeding 120 kilometres per hour, threatening to ravage more of the west coast.

Hundreds of schools and roads have been closed, including the 101 Freeway – the main coastal route north of Los Angeles between Ventura and Santa Barbara.

Footage of the incident has shown terrifying scenes of cars driving towards hills completely engulfed in flames, raising questions about the state’s preparedness for fire emergencies.

US television news outlet CNN reported while 1000 fire fighters battled the fast-moving fires, many residents have been fighting the blaze with regular garden hoses.

On Thursday evening (US time), California Governor Edmund Brown issued an “emergency proclamation” statement for the ‘Lilac Fire’ in the region after declaring the Los Angeles and Ventura fires earlier in the week.

Extreme fire danger warnings were sent to millions of mobiles phones late on Wednesday night. The automated alert was reportedly California’s largest-ever use of a disaster alert system.

The fire emergency follow wildfires in California in October, which killed 43 people in the northern wine country.

Fire responders say winds have hampered efforts to contain the multiple blazes that have destroyed hundreds of homes in Oxnard, Malibu, Huntington Beach and the San Diego area.

Fire has also ravaging some of southern California’s richest neighbourhoods, including at least six properties in the mega-wealthy suburb of Bel-Air, in the Los Angeles hills.

The inferno has been no respecter of celebrities, with Paris Hilton and comedian Chelsea Handler among the legions of Californians forced to abandon their homes.

Institutions such as the University of California Los Angeles campus and the Getty Museum have been under threat from the out of control ‘Skirlball’ blaze.

Back at home, the Australian Bureau of Meteorology has indicated a high risk of grassland fires over inland Australia for the upcoming summer season.

The weather authority said higher rainfall over the past two years meant there was above-average growth of grassy fuels.