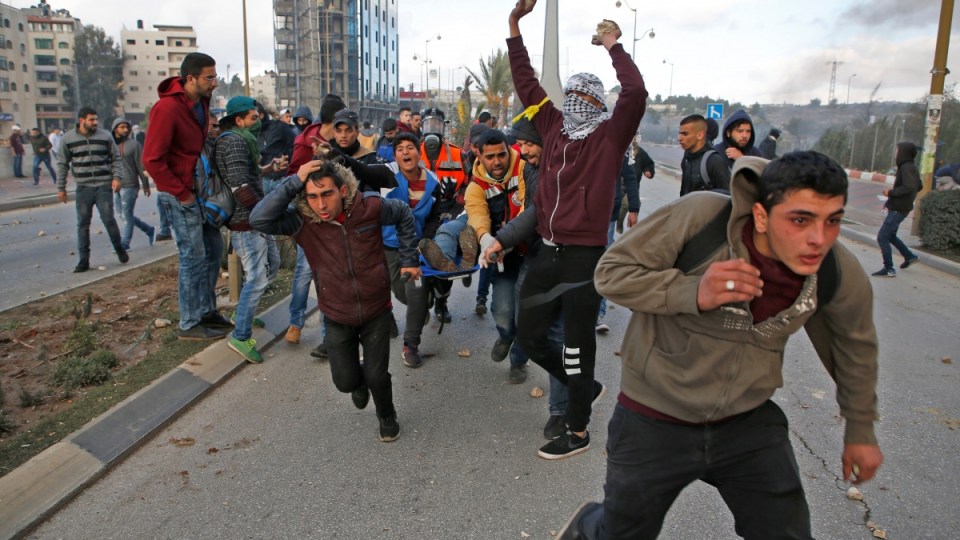 Hamas is urging Palestinians to abandon peace efforts and launch an uprising against Israel in response to US President Donald Trump’s recognition of Jerusalem as its capital.

Dozens of Palestinians have been injured, at least one critically, in a wave of violent protests in the West Bank and Gaza after local factions called for a “Day of Rage” in response to Mr Trump’s decision.

The Israeli military said on Friday morning (AEST) that two rockets had been fired towards Israel from the Hamas-ruled Gaza Strip, but did not cross into Israeli territory.

At least 49 Palestinians were injured in the protests, with at least one in a critical condition in hospital, according to local health authorities in the West Bank.

At least four Palestinians were injured in Gaza after Israeli soldiers fired live ammunition at dozens of demonstrators, according to Palestinian news agency Wafa.

Protesters were heard chanting “Jerusalem is the capital of the State of Palestine”, “Death to America! Death to the fool Trump!” as violent scenes escalated.

The Australian Department of Foreign Affairs and Trade issued a warning to Australian travellers on Friday morning to be alert of the widespread protests.

Foreign Minister Julie Bishop confirmed on Thursday that Australia would be leaving its embassy in Tel Aviv.

“Large protests are likely, particularly after Friday prayers, and could result in violence. Avoid demonstrations and monitor the media about possible unrest,” it read.

Hamas leader Ismail Haniyeh said in a speech in Gaza that the US support for Israel “could only be confronted by a renewed intifada against the occupation”.

He called the US-Israeli alliance “satanic”.

“We should call for and we should work on launching an intifada (Palestinian uprising) in the face of the Zionist enemy,” Mr Haniyeh said.

“It is a declaration of war against our Palestinian people in their holiest of holy places of the Christians and Muslims.”

Mr Haniyeh, elected the group’s overall leader in May, urged all Muslims to hold further rallies against the US decision.

Naser Al-Qidwa, an aide to Palestinian President Mahmoud Abbas and senior official in his Fatah party, urged Palestinians to stage protests but said they should be peaceful.

Israel considers Jerusalem its eternal and indivisible capital. Palestinians want the capital of an independent state of theirs to be in the city’s eastern sector, which Israel captured in the 1967 Middle East war and annexed in a move never recognised internationally.