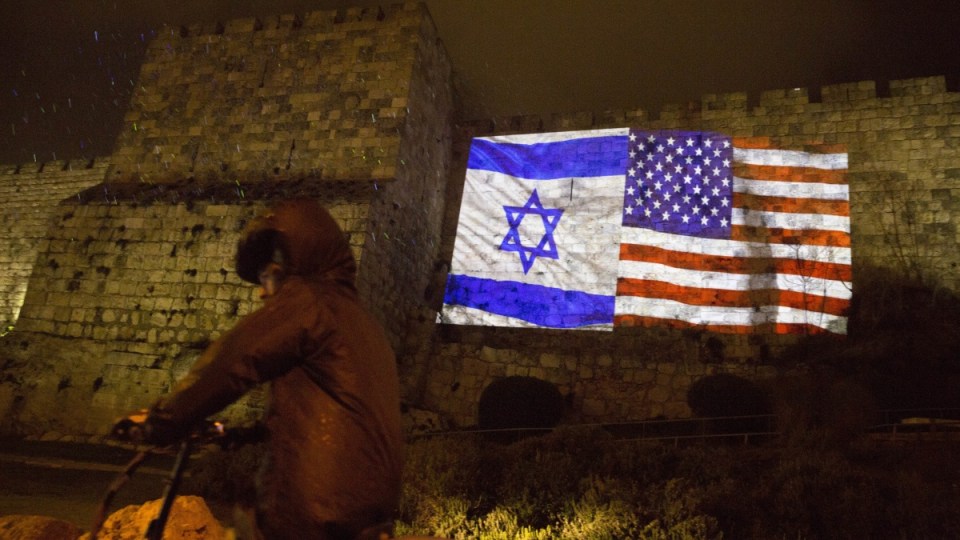 The US threatens peace in the Middle East by recognising Jerusalem as the israeli capital. Photo: AP

US President Donald Trump has ignored the pleas of fellow world leaders and sparked fury in the Muslim world by formally recognising Jerusalem as the capital of Israel.

Breaking 70 years of carefully considered diplomatic convention, Mr Trump announced Thursday morning (AEST) that the US would begin the process of moving its embassy to the ancient city.

“My announcement today marks the beginning of a new approach to conflict between Israel and the Palestinians,” the President said at the White House.

“In 1995, congress adopted the Jerusalem embassy act urging the federal government to relocate the American embassy to Jerusalem and to recognise that that city and so importantly is Israel’s capital. This act passed congress by an overwhelming bipartisan majority,” he said.

“I have determined that it is time to officially recognise Jerusalem as the capital of Israel.”

Mr Trump acted under a 1995 law that requires the US to move its embassy to Jerusalem. His predecessors, Bill Clinton, George W Bush and Barack Obama, had consistently put off that decision to avoid inflaming tensions in the Middle East.

“These procedures do also help in the extremist organisations to wage a religious war that would harm the entire region which is going through critical moments and would lead us into wars that will never end which we have warned about and always urged to fight against,” Mr Abbas said.

Palestine’s envoy to the UK said on Wednesday that Trump’s expected announcement would be a declaration of war “against 1.5 billion Muslims (and) hundreds of millions of Christians that are not going to accept the holy shrines to be totally under the hegemony of Israel.”

“While previous presidents have made this a major campaign promise, they failed to deliver. Today, I am delivering,” Mr Trump said.

I have determined that it is time to officially recognize Jerusalem as the capital of Israel. I am also directing the State Department to begin preparation to move the American Embassy from Tel Aviv to Jerusalem… pic.twitter.com/YwgWmT0O8m

Mr Trump said the move to recognising Jerusalem as the capital of Israel was “nothing more or less than the recognition of reality.”

He also acknowledged Jerusalem’s standing as a deeply religious site for Jews, Christians and Muslims.

He added that the United States is still supportive of a two-state solution.

Mr Netanyahu called on all countries that “seek peace to join the United States in recognising Jerusalem as Israel’s capital and to move their embassies here.”

“The President’s decision is an important step towards peace, for there is no peace that doesn’t include Jerusalem as the capital of the State of Israel,” he said.

King Abdullah II of Jordan,- speaking at a press conference in Istanbul with Turkish President Recep Tayyip Erdogan, said Wednesday the US was inviting a massive backlash with the decision.

“Ignoring the Palestinian, Muslim, and Christian rights in Jerusalem will only fuel further extremism and undermine the war against terrorism,” King Abdullah said.

Speaking after Mr Trump’s announcement, United Nations Secretary General António Guterres said the two-state solution to peace in Israel was the only way to solve conflict in the region.

“In this moment of great anxiety, I want to make it clear: There is no alternative to the two-state solution. There is no Plan B,” Mr Guterres said.

“It is only by realising the vision of two states living side-by-side in peace, security and mutual recognition, with Jerusalem as the capital of Israel and Palestine, and all final status issues resolved permanently through negotiations, that the legitimate aspirations of both peoples will be achieved.”