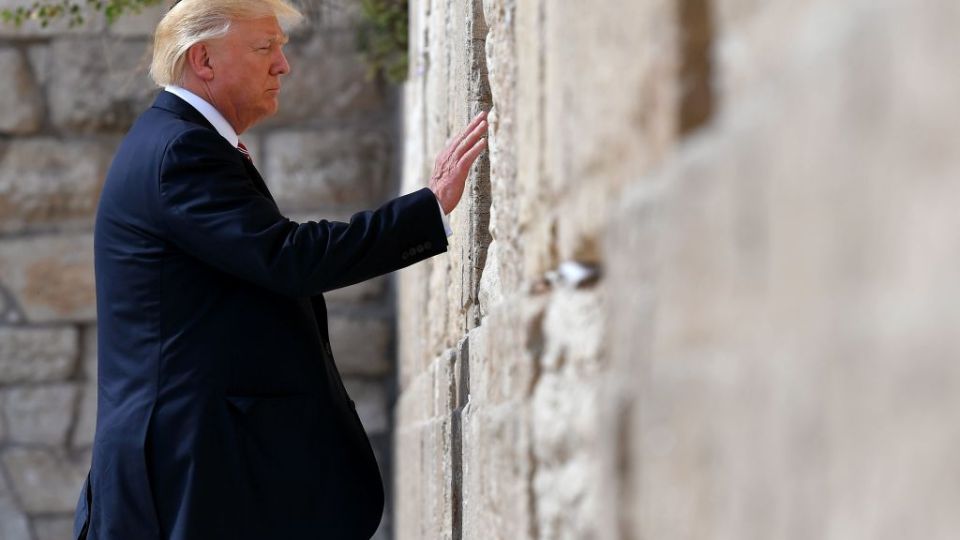 President Donald Trump visiting the Western Wall in Jerusalem in May. Photo: Getty

President Donald Trump will formally recognise Jerusalem as Israel’s capital on Wednesday (US time), despite warnings of “catastrophe and new conflict” in the region.

The White House confirmed on Wednesday (AEDT) that Mr Trump had advised the Palestinian Authority and Jordan of his plans to recognise Jerusalem and relocate the US Embassy to the ancient city.

The decision reverses decades of US policy and, according to one Israeli politician, risked setting “the entire region on fire”.

“Trump is a pyromaniac who could set the entire region on fire with his madness,” Ayman Odeh told the Jerusalem Post newspaper.

Palestinian factions jointly announced three “days of rage” beginning Wednesday, not just in the Middle East but worldwide, to protest the move and the recognition of Jerusalem.

“We call on all our people in Israel and around the world to gather in city centres and Israeli embassies and consulates, with the aim of bringing about general popular anger,” the statement said, as reported in the Jerusalem Post.

Leader of the left-leaning Meretz party, Zehava Gal-On, warned that moving the US embassy to Jerusalem could “enflame the entire region”.

“Jerusalem is the Israeli capital and will continue to be with or without the US embassy,” Ms Gal-On said. “Moving the embassy could serve [Israeli Prime Minister Benjamin] Netanyahu but could bring about an unnecessary explosion.”

Meanwhile, the Saudi Press Agency said King Salman bin Abdul Aziz warned Mr Trump “that such a dangerous step of relocation or recognition of Al-Quds [Jerusalem] as the capital of Israel would constitute a flagrant provocation of Muslims, all over the world”.

Facing an outcry of opposition from the Arab world, Mr Trump, in a landmark speech, will announce that he has ordered the State Department to begin developing a plan to move the embassy from Tel Aviv in what is expected to be a process that takes three to four years, the officials said. He will not set a timetable for the move.

Mr Trump’s endorsement of Israel’s claim to all of Jerusalem as its capital will reverse long-standing US policy that the city’s status must be decided in negotiations with the Palestinians, who want East Jerusalem as the capital of their future state.

The international community does not recognise Israeli sovereignty over the entire city, home to sites holy to the Muslim, Jewish and Christian religions.

Instead, one of the officials contended that Mr Trump’s announcements reflected the “historic reality” of Jerusalem as the centre of Jewish faith and the “modern reality” that it is the seat of Israeli government.

Palestinian President Mahmoud Abbas, Jordan’s King Abdullah, Egyptian President Abdel Fattah al-Sisi and Saudi Arabia’s King Salman, who all received telephone calls from Trump on Tuesday, have joined a mounting chorus of voices warning that unilateral US steps on Jerusalem will derail a fledgling US-led peace effort and unleash turmoil in the region.

Move of Israeli capital to Jerusalem to spark days of ‘rage’