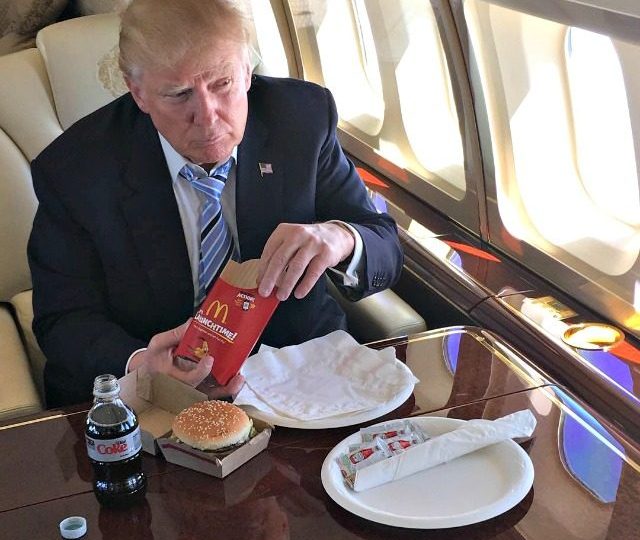 Donald Trump’s voracious McDonald’s order and expletive tirades at aides during the presidential campaign have been revealed in a new fly-on-the-wall memoir.

On his private plane, the then-candidate regularly dined on pizza, KFC, and McDonald’s during campaign stops, where he would ask for two Big Macs, two Filet-O-Fishes and a chocolate milkshake, according to insider accounts.

His chosen meal amounts to 10,125 kilojoules containing 112 grams of fat and 3470 milligrams of salt – 172 per cent and 144 per cent of his daily intake respectively, as per the American Heart Association’s recommendations.

The new book also claims Mr Trump would play Elton John songs at ear-piercing volumes, while aides were subjected to expletive-filled tirades in which they would get their “faces ripped off”.

“The mode that he switches into when things aren’t going his way can feel like an all-out assault,” the authors wrote.

“It’d break most hardened men and women into little pieces.”

In one section of the book, the authors detail one incident when Mr Trump learns his campaign manager Paul Manafort said he should not go on television anymore.

The authors described it as “one of the greatest takedowns in the history of the world”.

“Did you say I shouldn’t be on TV on Sunday? I’ll go on TV anytime I God damn f—–g want and you won’t say another f—–g word about me!” he reportedly yelled at Mr Manafort.

“Sooner or later, everybody who works for Donald Trump will see a side of him that makes you wonder why you took a job with him in the first place,” the authors added.

Mr Lewandowski and Mr Bossie conceded they “both had moments where they wanted to parachute off Trump Force One”, but never thought of actually quitting.