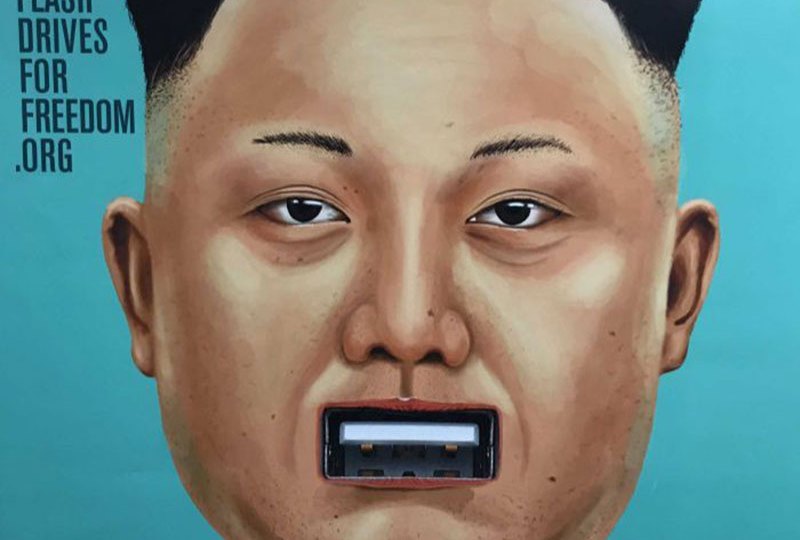 Many organisations have taken up the fight to smuggle Western and South Korean media across the border. Photo: ABC

On a dirt path along the Chinese border, a man slips under a barbed wire fence with a package he hopes can bring down the North Korean regime from within.

He scrambles down to the rocky shoreline before casting it into the waters, bound for the North Korean soldiers on the other bank.

His weapon is not a bomb or a covert spying device, but a bundle of USB sticks strapped to a tyre tube and loaded with South Korean pop music and films.

This is the frontline in a secret information war for the minds of North Koreans. Those waging it believe it will be more effective than economic sanctions or military action.

In homes across North Korea, a silent revolution is taking place.

In secret, North Koreans are watching South Korean dramas and documentaries, K-pop and Western films smuggled into the country.

They watch transfixed as an unknown world of wealth and prosperity flashes across their screens. It’s a simple act but in North Korea it can lead to a death sentence.

In North Korea, any news from the outside is strictly forbidden – the regime has a monopoly over information.

This illicit window on the outside world is a challenge to the propaganda spell the regime casts over its citizens: that the West is an impoverished and immoral enemy that must be confronted.

The information war is being waged by a large network of North Korea defectors and activists from South Korea.

Chol Hwan Kang heads up one of the organisations taking up the fight, the North Korean Strategy Centre based in Seoul.

This year he has already sent 4000 USB flash drives across the border. He believes they have the power to change North Korea from within.

“We want to send a message of freedom to the North Korean people who have lived for 70 years without knowledge of human rights and democracy,” he said.

“Our ultimate goal is to change the mindset of North Korean people, to encourage an uprising, to demolish a regime that keeps them as slaves.”

At 10 years old he was sent to the infamous Yodok Gulag for a decade before escaping and defecting to South Korea. The trauma and memories motivate him in his mission.

“Life in there was full of agony. We were forced to witness public executions, the worst being my two close friends who were hanged,” he said.

“The guards didn’t bury them and made us stone their corpses. They left their bodies in the yard so we could see the birds picking at them.

“From then I knew I had to fight the North Korean regime and fight for human rights.”

The North Korean Strategy Centre runs several networks that can penetrate deep inside the secret state.

From China to North Korean soldiers

Most of the USBs are smuggled into North Korea along the 1400-kilometre border with China, especially on the northern frontier where it becomes the Tumen River.

The river is less policed and is shallow in parts, making it easy to cross and make contact with North Korean soldiers.

The activist filmed casting USBs into the river had also strapped small bribes of cash and cigarettes to the tyre tube.

Before making the daring exchange, another activist already had contact with the North Korean soldiers.

He told them, at a pre-arranged time, to watch out for a tyre coming their way.

The activists say the North Korean soldiers get the cash and cigarettes as an incentive but are also interested in seeing what is on the USB drives.

They watch and share the contents with their fellow soldiers.

It is potentially deadly to get caught with them, but the soldiers’ curiosity gets the better of them.

There are estimates that 10 per cent of North Korean soldiers have been exposed to the USBs.

The activists use many different ways to get their USBs into North Korea.

Bribing guards not to shoot

At another part of the Tumen River, another group of activists gather.

One of them has already contacted and bribed the North Korean soldiers on the other side with small amounts of cash and cigarettes.

North Korean border guards are usually on shoot-to-kill orders for any border crossers.

The activists hide the USBs in cigarette packets, put them in boxes and wade across the river into North Korea.

In this case, the activists are Chinese so it is easier for them to travel inside North Korea.

They spend several days posing as traders and visit local markets and, if they judge it is safe, they will give the USBs away.

Then they quickly move to the next location.

Sometimes under the cover of darkness they will simply walk into North Korea and scatter the USBs in nearby villages and return before daybreak.

It is a very risky business.

One of the centre’s operatives was recently caught inside North Korea posing as a businessman. He had been travelling in the country for several days with the USBs.

He was imprisoned and tortured, before being released after a large bribe was paid. Only his Chinese nationality saved him.

The man who manages the networks inside North Korea says they are succeeding. He wants to remain unidentified for his safety.

“Our activity hurts the regime so if we keep on punching constantly, we can knock the regime out,” he said.

He also has a personal stake in the mission.

“Every day, I do this because my parents are still living in North Korea,” he said.

“I want to make North Korea a place where people can live with freedom and rights. I was lucky enough to get out but I have this responsibility.”

His aim is for 30 per cent of North Koreans to watch the USBs – that will be the point of no return when change will begin, he says.

“North Korea is like barren soil. The people are so eager to see things they don’t know. They walk for hours to watch new material. There is a real hunger for it.”

Radio is another weapon the activists use and the number of programs being broadcast directly into North Korea from Seoul has rapidly increased over the last several years.

There are now 30 programs run from four different networks operating in the South Korean capital.

North Korea attempts to jam any outside radio frequencies but activists have found innovative ways to break the blockade.

Kang Mi Jin defected from North Korea in 2014 and now works at Daily NK, producing a program about the social and economic issues in the Korean peninsula.

Every day she interviews North Koreans and says their minds are easily opened.

“I think we can change North Korea. When I lived there I was so affected by radio coming from South Korea. It made me dream of a freer Korea and then I defected.”

The ambition of these defector and activists is big and the plans are often low tech and low budget.

But they are convinced their brand of warfare will lead to change.

The first step to regime change is changing the people’s minds.

The secret war for minds being waged inside North Korea