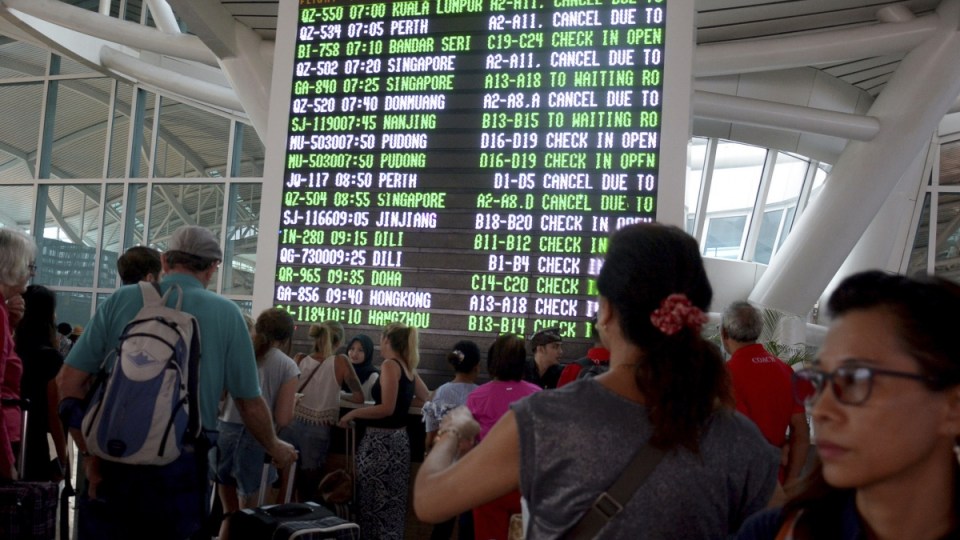 Experts say a major eruption could still happen at any time, leaving airlines with no choice but to continue to cancel flights. Photo: AAP

More than 2000 Australians remain stranded in Bali as airlines continue to cancel flights out of the holiday island amid continuous changing weather conditions and volcanic activity from Mount Agung.

Jetstar announced on its travel alert page that the forecast for Saturday night “has deteriorated” and as a result several flights have been cancelled with only five flights scheduled to arrive in Perth, Adelaide and Melbourne.

The budget airline also cancelled all flights from Australia to Bali on Saturday, throwing thousands of holiday makers’ plans into disarray.

“At this stage Jetstar and Qantas will still operate seven flights out of Bali today while it is safe to do so to get as many people back to Australia as possible,” said a statement issued by Jetstar at 12pm on Saturday.

“Our senior pilots will make further assessment tonight and tomorrow morning based on the latest information from the Volcanic Ash Advisory Centre. We will provide customers with an update if the situation changes.

“Due to the unpredictability of volcanic activity and the potential for further diversions and cancellations, we will not be operating any flights from Australia to Bali on Saturday.

“If conditions remain clear, we will look to resume scheduled services from Australia to Bali in the coming days.”

Virgin Australia said it would schedule three “recovery” flights from Denpassar airport on Saturday including a “shuttle service” into Darwin but had cancelled all four flights from Australia.

Meanwhile, a government volcanologist says activity at the Mount Agung volcano on Bali has subsided.

“It’s activity has decreased since yesterday,” said Gede Suantika, head of mitigation at the Centre for Volcanology and Geological Hazard Mitigation on Friday.

“There was no eruption today. Let’s hope that it continues to calm down,” he said.

But he warned that there was still likely to be a large amount of pressure inside the volcano and that a major eruption could still happen at any time.

Authorities on Monday raised the warning alert to the highest level and ordered the evacuation of nearly 100,000 people after the volcano began belching ash over the weekend.

Bali’s airport was closed for two-and-a-half days earlier in the week owing to fears that ash from Mount Agung could threaten flight safety.

Several flights were cancelled on Friday even though the airport remained open.

Jetstar and Qantas cancelled some of its flights planned for Friday “due to a sudden change in today’s forecast for this evening in Bali”.

The international airport on the neighbouring resort island of Lombok, which was closed on Thursday, reopened on Friday morning.