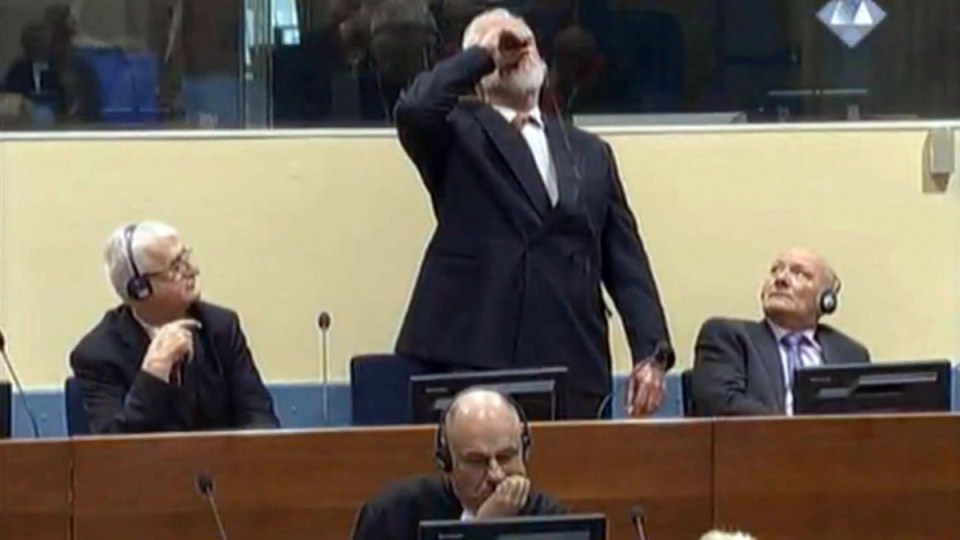 Former Bosnian Croat warlord yelled 'I have taken poison' as his verdict was read out. Photo: Getty

A former Bosnian Croat warlord has died in hospital after apparently drinking poison in a UN courtroom moments after losing his appeal against a 20-year sentence for war crimes.

Slobodan Praljak, 72, drank from a small bottle and shouted “I am not a war criminal!” as the verdict was read at The Hague over his involvement in a campaign to drive Muslims out of Bosnia in the 1990s.

Dramatic courtroom footage showed Praljak standing up before swallowing a  clear liquid while telling the court: “I have taken poison. I am not a war criminal. I oppose this conviction.”

Praljak sat back down and slumped in his chair, a lawyer who was in the courtroom at the time said.

“Okay,” the judge said. “We suspend the… We suspend… Please, the curtains. Don’t take away the glass that he used when he drank something.”

Before the curtains were lowered, the courtroom could be seen in a state of confusion, the BBC reported.

An ambulance and a helicopter arrived at the scene shortly after, and emergency rescue workers rushed into the building.

The ICTY released a statement saying Praljak “was immediately assisted by the ICTY medical staff” and died after being transported to a nearby hospital.

An independent investigation is now under way.

Praljak was first sentenced in 2013 for war crimes in the city of Mostar during the Bosnian war in 1992-95.

A total of 100,000 people were killed and 2.2 million were displaced in the bitter conflict.

He was one of six former Bosnian Croat political and military leaders appealing their convictions before ICTY.

“His act, which we regrettably saw today, mostly speaks about a deep moral injustice towards six Croats from Bosnia and the Croatian people … We voice dissatisfaction and regret about the verdict,” Mr Plenkovic said.

The appeal verdict was one of the last to be handed down by the ICTY, which was established by the UN in 1993 and shuts its doors next month when its mandate expires.

The court’s lead suspect, former Yugoslav President Slobodan Milosevic, died of a heart attack in March 2006 months before a ruling in his genocide case.

Two defendants awaiting trial died by suicide, according to court documents. Slavko Dogmanovic died in 1998 and Milan Babic was found dead in his locked cell in 2006.

Former Bosnian Serb commander Ratko Mladic was last week sentenced to life in prison by the ICTY for genocide and crimes against humanity perpetrated during the Bosnian war.

A three-judge panel in The Hague convicted Mladic, dubbed The Butcher of Bosnia, of 10 of 11 counts in a dramatic climax to a groundbreaking effort to seek justice for the wars in the former Yugoslavia.