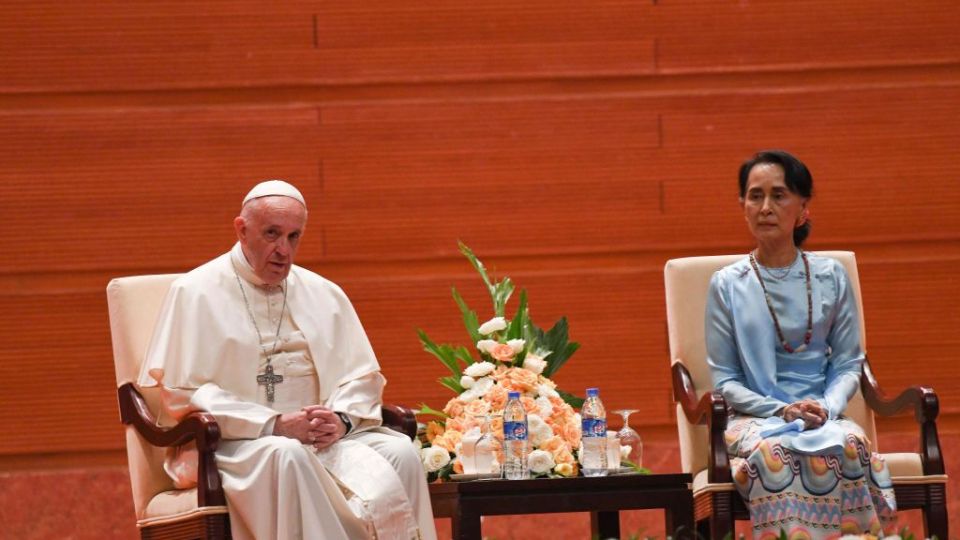 Pope Francis has called for peace in Myanmar but avoided referring to Rohingya Muslims while delivering a speech to the country’s leaders.

The pope is known as a staunch advocate of persecuted minorities. But in a much-anticipated speech, he dodged the controversial term Rohingya after advisers warned him it could aggravate the crisis.

“The future of Myanmar must be peace, a peace based on respect for the dignity and rights of each member of society, respect for each ethnic group and its identity,” he said in the speech on Tuesday.

He said Myanmar had suffered from hostilities “that have lasted all too long and created deep divisions”. Democracy “enables each individual and every group – none excluded – to offer its legitimate contribution to the common good”.

The pope’s advisers feared referencing the Rohingya struggle directly could trigger a violent backlash to the small Catholic population in Myanmar.

Speaking at the Vatican three months ago, The Pope had referred to “the persecution of our Rohingya brothers”.

“I would like to express my full closeness to them,” he said at the time.

“Let all of us ask the Lord to save them, and to raise up men and women of good will to help them, who shall give them their full rights.”

The Muslim minority are called “Bengalis” in Myanmar to support the claim Rohingyas are illegal Bangladeshi immigrants, instead of as an ethnic minority. Myanmar has stripped citizenship from the group.

More than 620,000 people have fled the country since violence ramped up in August. The military has been accused of burning villages, massacring and raping people.

Suu Kyi, a Nobel Peace Prize recipient who was elected as citizen leader in 2015, has suffered a blow to her reputation following the crisis. Some have argued she has no control over the military and any intervention would inflame the situation.

Pope Francis calls for peace in Myanmar, avoids referring to the Rohingya crisis