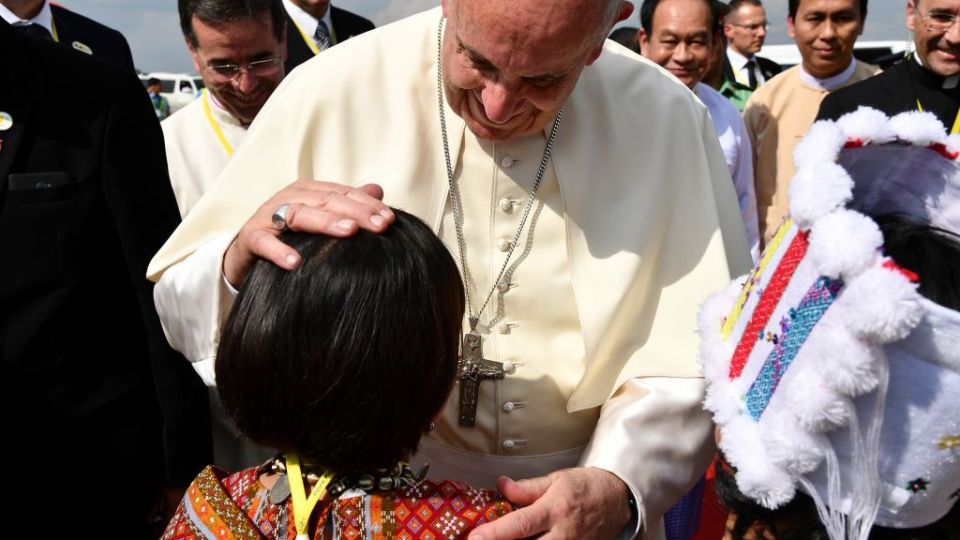 Pope Francis is greeted by a child upon his arrival at Yangon airport in Myanmar. Photo: Getty

Pope Francis has held talks with Myanmar’s military chief at the start of a delicate visit to the country accused of “ethnic cleansing” against its Muslim Rohingya people.

The leader of the Roman Catholic church will also visit Bangladesh, where more than 620,000 Rohingya have fled to escape what Amnesty International has called “crimes against humanity”.

Myanmar’s army has denied accusations of murder, rape, torture and forced displacement that have been made against it.

The Pope’s first meeting in Yangon was with military commander Senior General Min Aung Hlaing in St Mary’s Cathedral in the heart of the Southeast Asian nation’s largest city.

“They discussed the great responsibility of authorities of the country in this time of transition,” Vatican spokesman Greg Burke said after the 15 minutes of talks on Monday, which were followed by an exchange of gifts.

Francis presented the general with a commemorative medal of his visit and Min Aung Hlaing gave the Pope a harp in the shape of a boat and an ornate rice bowl, Mr Burke said.

The army chief told the pope that “there’s no religious discrimination in Myanmar and there’s the freedom of religion”, according to a statement on the Facebook page of Min Aung Hlaing.

Members of ethnic minority groups in traditional dress welcomed Francis at Yangon airport, and children presented him with flowers as he stepped off his plane.

He waved through an open window at dozens of children waving Vatican and Myanmar flags and wearing T-shirts with the motto of the trip, “love and peace”, as he set off in a car.

Only about 700,000 of Myanmar’s 51 million people are Roman Catholic. Thousands of them travelled by train and bus to Yangon, and they joined crowds at several roadside points along the way from the airport to catch a glimpse of the pope.

More than 150,000 people have registered for a mass that Francis will say in Yangon on Wednesday, according to Catholic Myanmar Church spokesman Mariano Soe Naing.

The most tense moments of his Myanmar visit were expected to be the private meeting with the army chief and, separately, with civilian leader Aung San Suu Kyi on Tuesday.