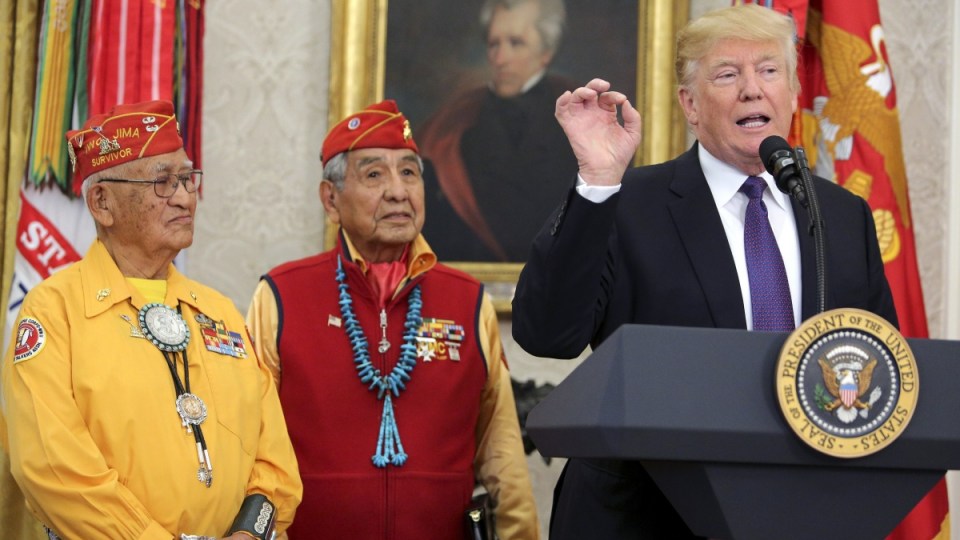 President Donald Trump has used an event honouring Native American veterans to take a shot at Democratic Senator Elizabeth Warren, whom he has long derided as “Pocahontas”.

During remarks praising their service, Mr Trump said: “We have a representative in Congress who they say was here a long time ago. They call her Pocahontas. But you know what, I like you.”

“He’s the general and the chief,” he said.

Here’s the video: Trump calls Elizabeth Warren ‘Pocahontas’ while honoring Native American code talkers: “You were here long before any of us were here. Although we have a representative in Congress who they say was here a long time ago. They call her Pocahontas.” pic.twitter.com/hjZ5MInDDf

The Republican President has repeatedly mocked the Massachusetts senator for claims she made about being part Native American.

“This was supposed to be an event to honour heroes, people who put it all on the line for our country, who, because of their incredible work, saved the lives of countless Americans and our allies,” Ms Warren told MSNBC.

“It is deeply unfortunate that the President of the United States cannot even make it through a ceremony honouring these heroes without having to throw out a racial slur.”

White House press secretary Sarah Huckabee Sanders said Mr Trump meant no offence and what was offensive was Ms Warren’s claim about her heritage, not the President’s comments.

Mr Trump first used the nickname during his presidential campaign in an attempt to discredit Ms Warren’s criticism of him.

In June 2016 at a campaign rally in Virginia, he said: “Pocahontas is not happy, she’s not happy. She’s the worst.

President Trump was slammed on social media for his “bigoted” reference to Ms Warren.

Don’t ever tell me kneeling for the flag is disrespectful to our troops when Trump calls a sitting Senator “Pocahontas” in front of Native American war heroes.

Note to Sarah Huckabee Sanders:
Referring to someone with an ethnic nickname (Sambo, Paco, Habib, Chan, "Pocahontas") in PRIVATE is bigoted.

To do it IN FRONT OF honored members of that ethnicity is DISGUSTING.
Acting like it ISN'T disgusting is WORSE.

To add insult to injury, the event was conducted in front of a portrait of former president Andrew Jackson, who signed into law the Indian Removal Act.

In keeping with tradition, Mrs Trump was in charge of dressing up the White House for the holiday season.

The official theme this year is Time-Honoured Traditions, as the White House was filled with snowy decorations.

However, people have interpreted Mrs Trump’s winter wonderland differently – with a hallway lined with white branches lit from below creating a rather dark, Game of Thrones feel.

why do the White House Christmas decorations look like Voldemort is about to come back pic.twitter.com/nF0GxCaxUq

Just got a top secret pic from the set of Game of Thrones…hold up…no, I’m being told its the newly decorated White House. pic.twitter.com/c3KwjUJAhi

President Trump has continued his attack on the media by proposing a contest to determine which news outlets should win a “fake news trophy”.

On Twitter, Mr Trump singled out his favourite target, CNN, and other networks to suggest he could create an award for the “most dishonest, corrupt and/or distorted” coverage of “your favourite President (me)”.

However, his favoured news outlet, Fox, was excluded.

We should have a contest as to which of the Networks, plus CNN and not including Fox, is the most dishonest, corrupt and/or distorted in its political coverage of your favorite President (me). They are all bad. Winner to receive the FAKE NEWS TROPHY!

Meanwhile, the owners of a Trump hotel in Panama want the President’s name stripped from the building.

The owners of the 70-storey Trump Ocean Club International Hotel and Tower on Panama’s waterfront want to oust staff who are part of the Trump family’s hotel management company and remove the Trump tag to combat poor occupancy rates, AP reported.

The property once paid at least $US32 million ($42 million) to be associated with the Trump brand.

However, the Trump Organisation has quashed the hotel’s wish, saying the move was a contractual violation.

“Not only do we have a valid, binding and enforceable long-term management agreement, but any suggestion that the hotel is not performing up to expectations is belied by the actual facts,” the Trump Organisation said in a statement.