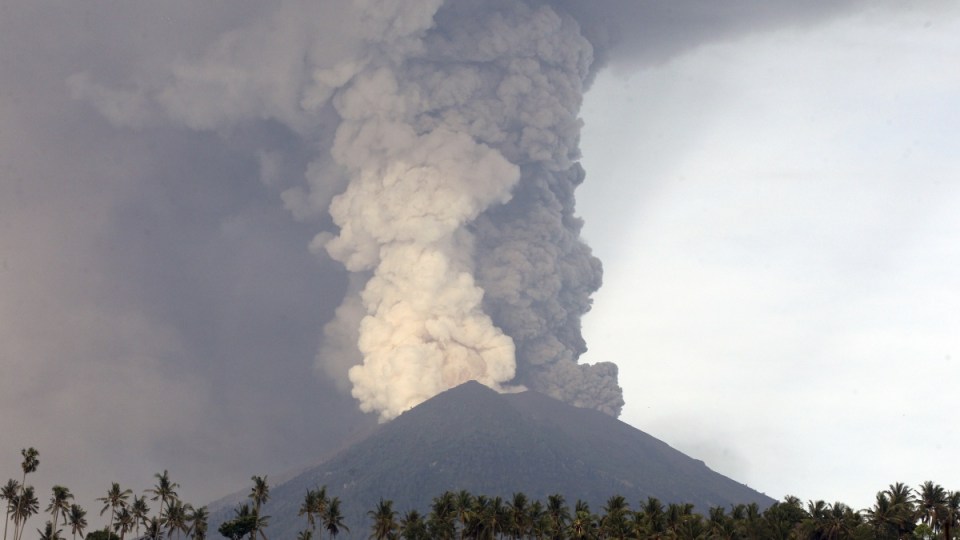 Mt Agung darkens the sky during another eruption in 2017. Photo: AP

Indonesia has warned the first major eruption of Mount Agung on the tourist island of Bali is imminent, with authorities closing the airport and ordering 100,000 residents living near the volcano to evacuate the area immediately.

The airport was closed for 24 hours from Monday morning, disrupting 445 flights and stranding about 59,000 passengers, after Mount Agung sent volcanic ash high into the sky. Officials said cancellations could be extended.

“Plumes of smoke are occasionally accompanied by explosive eruptions and the sound of weak blasts that can be heard up to 12km from the peak,” the Disaster Mitigation Agency said in a statement after raising the alert from three to its highest level of four.

“The potential for a larger eruption is imminent,” it said, referring to a visible glow of magma at Mount Agung’s peak overnight and warning residents to evacuate a danger zone at a radius of 8-10km.

Video footage shared by the agency showed volcanic mud flows (lahar) on the mountainside. Lahar carrying mud and large boulders can destroy houses, bridges and roads in its path.

Bali airport, about 60km from the volcano, will be closed for 24 hours, its operator said.

Ten alternative airports have been prepared for airlines to divert inbound flights, including in neighbouring provinces.

Virgin Australia said it was cancelling flights on Tuesday, while Jetstar was offering to exchange Bali bound tickets for other destinations.

Television footage showed hundreds of holidaymakers camped inside the airport terminal, some sleeping on their bags, others using mobile telephones.

“We have been here (in Bali) for three days we are about to leave today, but just found out our flights have been cancelled. We have got no information because the gates, the check-ins, have been closed indefinitely,” said Carlo Oben from Los Angeles.

Cover-More, Australia’s biggest travel insurer, said on its website customers would only be covered if they had bought policies before the volcano alert was first issued on September 18.