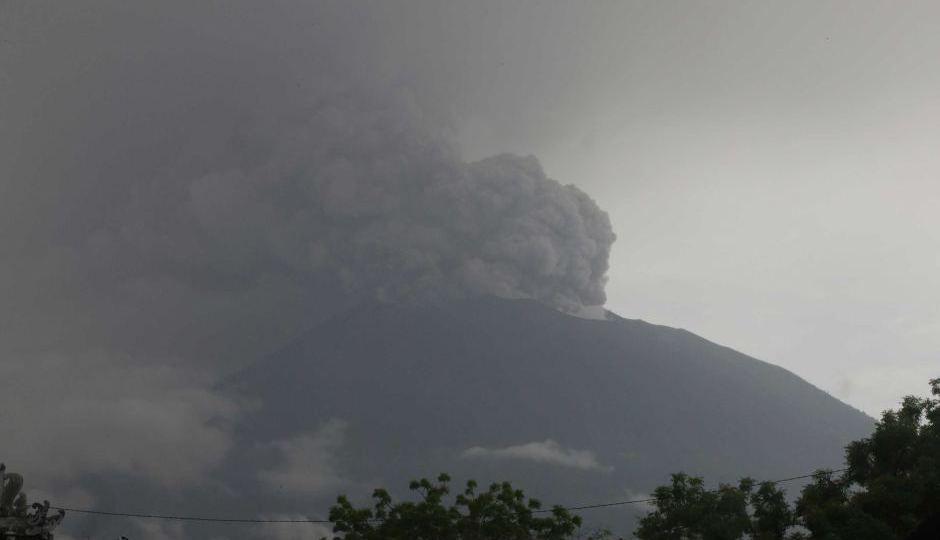 A major eruption is expected at any time. Photo: AP

Indonesian authorities have raised the alert for Bali’s erupting Mount Agung volcano to the highest level as all flights to the popular holiday destination are cancelled.

The National Disaster Mitigation Agency on Monday said Bali’s international airport had closed for 24 hours and authorities would consider reopening it on Tuesday after evaluating the situation.

Bali’s airport will be closed for at least 18 hours, when the airport’s status will be reassessed.

About 50,000 passengers use the airport each day and will now be stranded in Bali until flights resume, unless they take a boat off the island.

Evacuation orders were also ordered for people within 10 kilometres of the volcano.

Mount Agung has been hurling ash thousands of metres into the atmosphere, which forced the small international airport on the neighbouring island of Lombok to close on Sunday as the plumes drifted east.

Jetstar, Virgin and Qantas advised passengers between 10am-11am on Monday that all flights were cancelled.

The decision was made on safety grounds and overturns earlier expectations that flights would go ahead.

“While these disruptions are frustrating, we will always put safety before schedule,” Jetstar said in a statement.

Indonesian geological agency head, Kasbani, who goes by one name, said the alert level was raised at 6am local time on Monday because the volcano has shifted from steam-based eruptions to magmatic eruptions. However he says he’s still not expecting a major eruption.

“We don’t expect a big eruption but we have to stay alert and anticipate,” he says.

Previously the exclusion zone around the volcano ranged between 6 and 7.5 kilometres.

The volcano’s last major eruption in 1963 killed about 1100 people.

Virgin Australia updated its announcement online saying Denpasar Airport had closed and the airline had subsequently cancelled all flights to Bali.

Jetstar will next update passengers around 7pm AEDT after further advice from the Bureau of Meteorology’s Volcanic Ash Advisory Centre.

#Bali now. Not what you want to see when you arrive at the airport. pic.twitter.com/dIZCbzoN2E

Qantas confirmed its one flight per day from Sydney to Bali has been cancelled.

Dozens of flights had already been cancelled during Sunday because of volcanic ash, which poses a potentially deadly threat to aircraft and passengers.

A Perth Airport spokesman said all flights to Bali had been cancelled until further notice, adding that passengers who had boarded a Garuda flight that had been due to depart at 7:50am (WST) would be taken off the plane.

“We will try to make them as comfortable as possible, it’s unfortunate when these things happen,” he said.

“We are advising passengers booked to go to Bali to contact their airline.”

Australia’s Bureau of Meteorology’s Volcanic Ash Advisory Centre in Darwin issued maps showing an ash cloud heading southeast over the neighbouring island of Lombok away from Bali’s capital Denpasar, where the international airport is located.