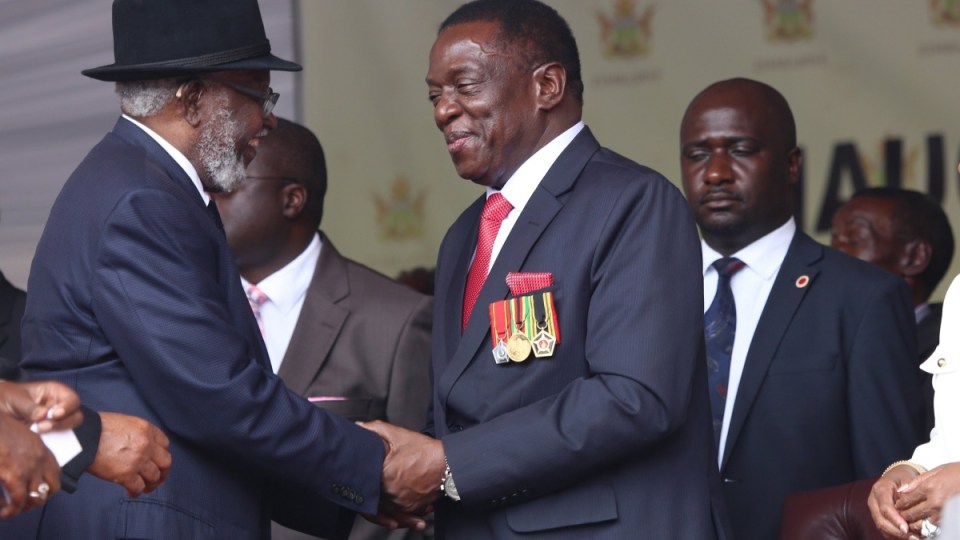 Mr Mnangagwa tells the Harare Stadium crowd 'we dare not squander the moment' as helicopters flew in formation after a 21-gun salute. Photo: AAP

Zimbabwe’s new president has been sworn in as the country’s leader and has told a packed Harare stadium that Zimbabweans must now put aside poisoned politics, work towards rebuilding the nation and re-engage with the world.

Emmerson Mnangagwa’s official swearing in came days after Robert Mugabe resigned, ending his 37-year rule of the country amid pressure from the military, former allies in the ruling party and massive street protests.

Mr Mnangagwa, a faithful aide to Mr Mugabe for decades, has been blamed for a number of the former president’s crackdowns and damaging policies but is promising democratic elections will go ahead as planned in 2018 and that foreign investment is safe in Zimbabwe, a message aimed at laying the groundwork for economic revival.

“We dare not squander the moment,” Mr Mnangagwa told the crowd.

Helicopters and planes flew in formation, an artillery unit fired a 21-gun salute, honour guards with fixed bayonets high-stepped and Zimbabwean pop star Jah Prayzah had people dancing on a day celebrating a new stage in the nation’s history.

Such an occasion had seemed almost impossible to contemplate for many Zimbabweans as the years dragged on under the 93-year-old Mugabe, who took power after the end of white minority rule in 1980.

Mr Mnangagwa, 75, was sacked as vice president by Mr Mugabe on November 6 in a dispute over the growing presidential ambitions of Mugabe’s unpopular wife, Grace.

The former justice and defense minister, however, had been one of Mugabe’s closest confidants, raising questions about just how much change and reconciliation there will be on his watch.

The new president praised Mr Mugabe, who will remain in the country but did not attend the inauguration, for his “immense contribution” to Zimbabwe’s emergence as a nation after a guerrilla war by black nationalists.

However, he sought to reinforce the idea of a “new Zimbabwe,” a refrain commonly heard in the streets of the capital, Harare.

“We must work together. You, me, all of us who make up this nation,” Mr Mnangagwa said, urging the millions of Zimbabweans who have left the southern African country to contribute to their homeland’s reconstruction.

But behind the rhetoric some Zimbabweans wonder whether a man who loyally served Mr Mugabe for decades can bring change to a ruling establishment accused of systematic human rights abuses and disastrous economic policies.