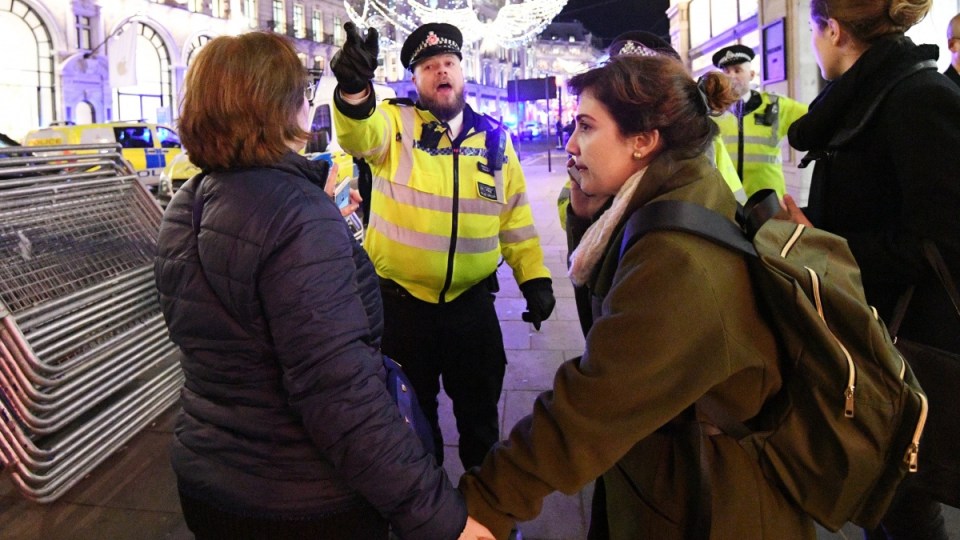 There were reports of people hiding in cupboards in basements, fearing another terror attack was underway in London. Photo: AAP

An altercation between two men was what sparked panic among Christmas shoppers on London’s Oxford Street prompting an evacuation of a packed tube station with police finding no evidence of gunfire or casualties.

Oxford Street, with its festive window displays and hundreds of overhead lights, was crammed with shoppers taking advantage of the Black Friday sales when the incident happened shortly after dusk.

Several people were injured as people ran up through the tube station, with nine needing hospital attention.

“Our response on Oxford Street has now been stood down,” the Metropolitan Police said on its official Twitter account on Friday.

“Given the nature of the info received we responded as if the incident was terrorism, including the deployment of armed officers,” police added.

The police said they had found no evidence of previously reported gunshots, and that there were no casualties.

We are releasing CCTV images of two men we would like to speak with following the incident at Oxford Circus earlier today.

Anyone with information, big or small, should get in touch by texting us on 61016. https://t.co/h71UlCqxFa pic.twitter.com/mRd8k2YIMq

BTP say the incident is believed to have started with an altercation between two men on a platform.

“Thank you to everyone for bearing with us this evening and also to colleagues from all the emergency services who helped carry out a swift response,” Chief Superintendent Martin Fry said.

“I know incidents like these can cause concern, but our officers are highly visible around the network and across the country.”

“We discharged seven patients at the scene and took eight patients to two central London hospitals for minor injuries.

“We also took one patient to a major trauma centre for leg injuries,” Mr Crichton said.

In an earlier statement,  BTP said Oxford Station was evacuated following reports of gunfire on a platform, which in turn “caused a significant level of panic which resulted in numerous calls from members of the public reporting gunfire”.

After armed police responded to the area which was packed with shoppers and rush-hour commuters, they announced nothing had been found and the Tube station has re-opened. Bond Street station which was also closed has re-opened, police have removed the barricades and people who took cover in a building have been told to leave.

Describing the panic, BBC producer Helen Bushby said: “I was just walking down from the BBC towards the tube and there was a mass stampede away from the tube as fast as they could.

“People said they heard a gunshot and panic was just spreading.”