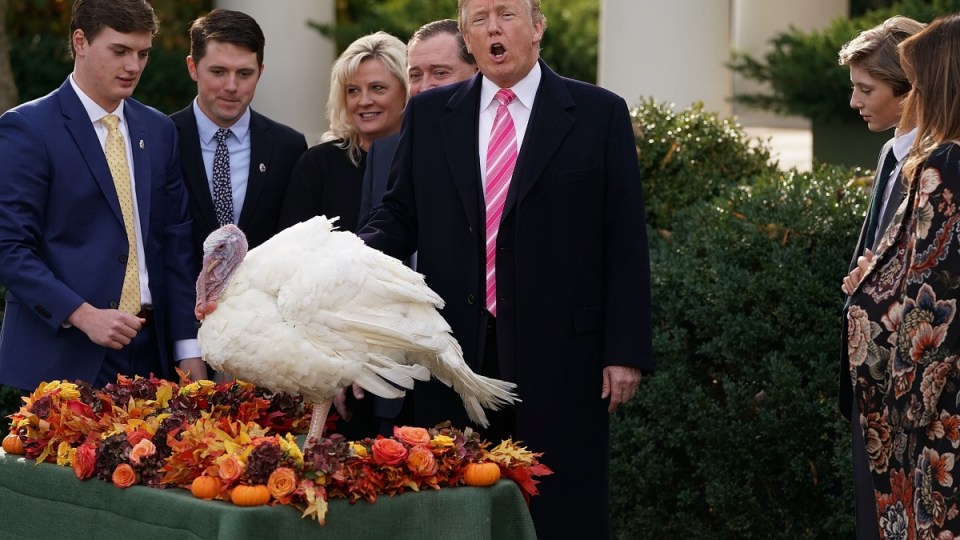 United States President Donald Trump has delivered a Thanksgiving message to the American people to be thankful – for him.

Celebrating his first Thanksgiving in office from his private club Mar-a-Lago in Florida, Mr Trump took a different approach to the holiday tradition.

At a time when many reflect on their blessings in life and help others in need, Mr Trump thanked himself for his achievements since taking office.

“HAPPY THANKSGIVING, your Country is starting to do really well,” Mr Trump tweeted on Thursday (US time).

HAPPY THANKSGIVING, your Country is starting to do really well. Jobs coming back, highest Stock Market EVER, Military getting really strong, we will build the WALL, V.A. taking care of our Vets, great Supreme Court Justice, RECORD CUT IN REGS, lowest unemployment in 17 years….!

In Washington on Tuesday, Mr Trump participated in one of the stranger holiday traditions in the White House – pardoning the turkey.

“This Thursday, as we give thanks for our cherished loved ones,” he read aloud.

“Let us also renew our bonds of trust, loyalty and affection between our fellow citizens as members of a proud national family of Americans.”

But when it came to formally pardoning the bird, Mr Trump brought the focus back to himself, saying: “I feel so good about myself doing this.”

Need something to discuss over #Thanksgiving dinner? Try this

Unlike his father however, Trump Jr also tweeted a sincere Thanksgiving message with a photo of his five children.

“From my family to yours, Kai Donnie, Tristan, Spencer, & baby Chloe (as she refers to herself) wanted to wish you all a very happy & healthy #Thanksgiving,” he said.

“As Americans we truly have a lot to be thankful for and perhaps we should all sit back & recognise that a bit more often!”

Meanwhile, actress Olivia Wilde used the holiday as an opportunity to call out Ivanka Trump in a Thanksgiving Day Instagram post to fight for “DREAMers”.

After realising the president’s daughter followed her on social media, Wilde asked Ivanka to use her influence to support the newly proposed DREAM ( Development, Relief, and Education for Alien Minors) act – after her father famously ended the Deferred Action for Childhood Arrivals (DACA) immigration policy in September.

“I see you’re following me on Instagram. This Thanksgiving I would be grateful if you use the influence you have to advocate for a CLEAN Dream Act by December,” she wrote.

“Every day that passes without a clean Dream Act means anxiety and deportation for immigrant youth.

“7,901 youth have already lost DACA and 122 more will lose it each day. Thank you and happy holidays.”