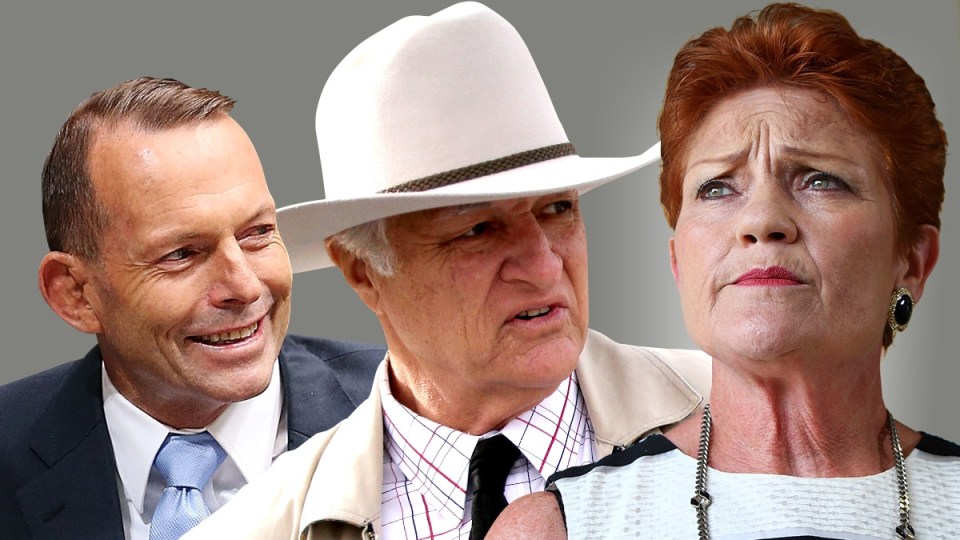 Bob Katter’s bizarre response to marriage equality is making international headlines. But he’s far from the only Aussie pollie to cause us international embarrassment.

Thanks to a just-aired slot by Stephen Colbert on popular United States’ program, The Late Show, the whole globe is probably laughing at us. Again.

As Colbert warns his audience: “The clip you’re about to see contains extreme levels of Australianness.”

In the clip, Mr Katter starts by welcoming the Yes result on marriage equality in peculiar language and a shrill, breathy tone: “I mean, you know, people are entitled to their sexual proclivities. You know, I mean, let there be a thousand blossoms bloom, as far as I’m concerned.”

Then his face spins around furiously, like Regan in The Exorcist, and booms: “But I ain’t spending any time on it, because in the meantime, every three months, a person is torn to pieces by a crocodile in North Queensland.”

Just as our nation started to appear modern and progressive around the world, back we’re catapulted to a goofy, swashbuckling backwater by one of our politicians.

Here are six other times our elected representatives have made us cringe.

John Oliver takes on  politicians who pushed for postal survey

The last time we were the subject of cringeworthy-yet-hilarious satire that went internationally viral was – embarrassingly – only at the end of last month. British comedian John Oliver’s take-down of the now infamous marriage equality postal survey was as brilliant as it was mortifying.

On US late-night talk show, Last Week Tonight, he described it as “dispiriting, pointless” and “the weirdest waste of money since every Baz Luhrmann movie ever made”.

In a scene that’d make the Trump administration look forward-thinking, our treasurer earlier this year brought into Parliament a fat, black lump of dirty coal. “This is coal – don’t be afraid, don’t be scared,” Mr Morrison heckled, before tossing it to the then-deputy prime minister, who chucked it to our Energy Minister, who passed it to other MPs in the Coalition government. It was reported by the UK’s Daily Express as a “FURIOUS rant” and “EPIC tirade”.

Ridiculing the Coalition’s opposition to the carbon tax was done so much better by memes than opposition MPs.Proving that politicians should never try to be cool and funny, former Labor minister Craig Emerson decided on a stunt to satirise Tony Abbott’s claim that the carbon tax could wipe out the South Australian town of Whyalla.With an askance glance to the staffer who perhaps talked him into it, Mr Emerson bops uncomfortably and completely out of time as the beat kicks in. Regret has surely kicked in by the time he sings out of tune to the theme-tune of the Skyhooks’ 1970s hit Horror Movie.

ABC reported: “The video of his performance has gone viral, with news of his song-and-dance routine being reported around the world.”

His very existence has become an international punchline. Eating an onion like it’s an apple. Claiming climate change has done more good than harm.

Giving a reporter the most awkward 28-second silent treatment you’ll ever see. And now out of touch with 75 per cent of his marriage-equality-supporting constituency, he has single-handedly replaced cultural cringe with political cringe. He became another target for John Oliver’s American show Last Week Tonight.

While we’re on the subject of has-been buffoon politicians, our former deputy prime minister’s rambling, inarticulate speech on ‘CAAARP!!!’ made us as red-faced as he often is – and made headlines on the other side of the planet.

No list of internationally embarrassing politicians is complete without the trump card: Pauline Hanson, whose reply of “ploise explain” entered the lexicon after being asked by a journalist if she was “xenophobic”. The august British newspaper, The Telegraph, described her “broad Queensland accent and lack of polish” before listing her manifold gaffes and controversial stunts.

Beyond Bob Katter: Our pollies being wallies on the global stage