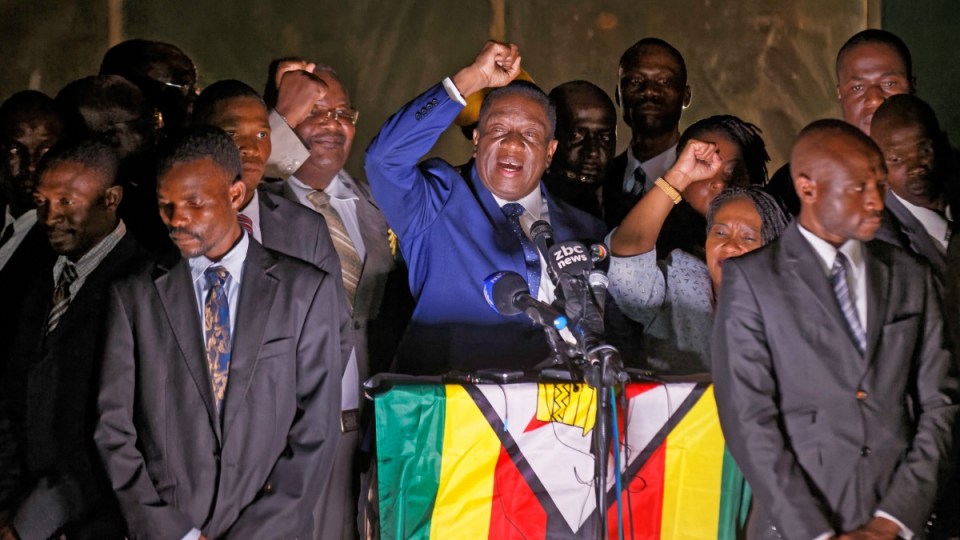 Zimbawe's incoming president says he fled the country in fear of his life. Photo: AP

Zimbabwe’s anointed new president Emmerson Mnangagwa has returned to the African country making sensational claims that he fled for his life after learning Robert Mugabe planned to “eliminate” him,

The 75-year-old, who is scheduled to be sworn in as president on Friday, told cheering crowds in the capital Harare that he fled to South Africa in fear of his life after being sacked as vice-president.

“Exactly 16 days ago I received a letter firing me from the government of the republic of Zimbabwe as vice-president. Within two hours I was informed about plans to eliminate me,” Mr Mnangagwa, flanked by bodyguards, said outside the headquarters of the ruling Zanu-PF party,

He went on to claim he survived a previous attempt on his life earlier this year.

“Realising that on the 12 August this year I was subjected to poisoning that resulted in my being airlifted to South Africa,” he said.

“I survived that poisoning. This time around I said to myself, ‘I should not wait for them to eliminate me’.”

Mr Mugabe, 93, who led Zimbabwe for 37 years, stepped down late on Tuesday.

The ageing leader was placed under house arrest last week by the Zimbabwe military, who cited concerns over properted plans to appoint his wife, Grace Mugabe, as successor after sacking Mr Mnangagwa.

Mr Mnangagwa revealed that he remained in constant contact with the military since their takeover .

He also said that orders were being given to the government from people outside the Zanu-PF executive in a veiled reference to the former first lady.

He has also thanked the speakers of parliament, the army and other officials who have helped him over the last week.

Mr Mnangagwa went on to address the state of the economy, saying all Zimbabweans needed to come together.

“We want peace. We want jobs, jobs, jobs in our country,” he said.

Zimbabwe’s next president accuses Mugabe of attempt on his life