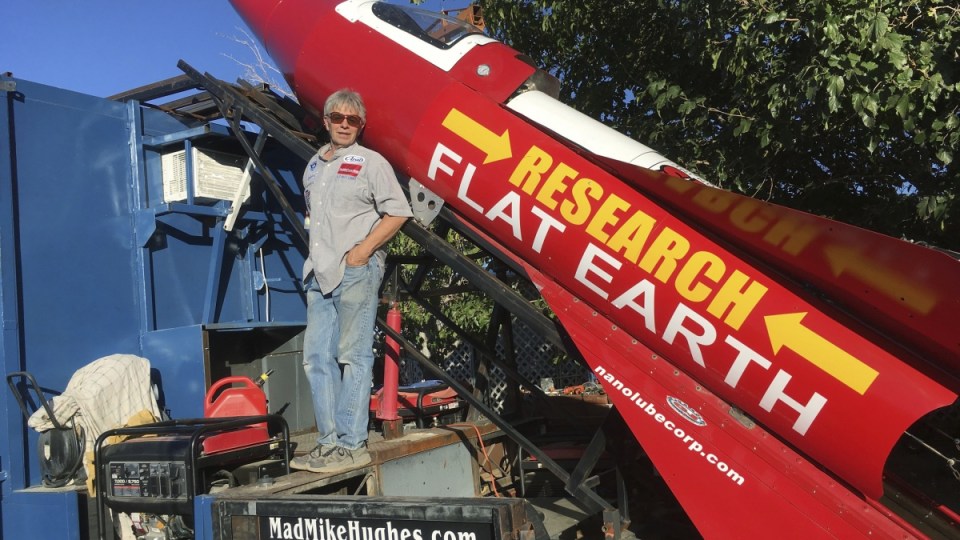 The daredevil/limousine driver swears he will pilot a homemade, steam-powered rocket at a speed of roughly 800kms-per-hour. Photo: AAP

Remember to say a prayer on Saturday for “Mad” Mike Hughes, “the world’s most famous limousine driver”.

Hopefully Mad Mike won’t have turned himself into a lump of pate packed into the nose cone of a homemade rocket when it comes down hard on the floor of the Mojave Desert, from a height of 550 metres.

Mr Hughes has a second, much higher flight planned, in which he plans to find undeniable evidence the Earth is flat.

A flat Earth news site called The Daily Plane has raised nearly $US8000 ($10,500) for Mad Mike’s upper atmosphere flight in a crowdfunding campaign – except “atmosphere” is being widely reported as “atmos-flat”.

In June, The Daily Plane crowdfunded a digital billboard for a week at Philadelphia airport urging drivers to “Research Flat Earth”. The same words are now painted on Mad Mike’s rocket.

Flat Earth thinking is making a comeback. Last week, North Carolina hosted the world’s annual Flat Earth International Conference, with about 400 people reportedly paying up to $250 a ticket. Ultimately, Dan Brown territory with much talk of the illuminati and Freemason astronauts faking their orbits and Elon Musk using blimps as pretend rockets.

In the flat Earth book of truths, there is only one true rocket man – “Mad” Mike Hughes, 61 years old, with previous attempts to become the new Evel Knievel by jumping his limousine a great distance. He’s also done previous test flights that nearly killed him.

Mad Mike’s story has gone viral – but not so much because of pre-existing world fame. As of Wednesday, he had 25 Twitter followers and 600 Facebook followers. He’s only recently converted to flat Earthing.

His long-time ambition was to become the first man to build and fly his own rocket into space. Billionaires with teams of scientists are trying to do the same thing. Mad Mike has said recently he doesn’t believe in science – it’s a conspiracy. In an interview six months ago, he admitted it was more a case of him being ignorant of vital engineering facts.

“This whole tech thing,” he said. “I’m really behind the eight ball.”

On Saturday, Mad Mike is forgoing the solid-fuel technology that took humans to the moon and is using steam power instead.

The New Daily sent messages to Mad Mike via his Twitter and Facebook accounts, asking: Was his conversion to a flat Earth an opportunistic fundraising ploy? Can he prove the world is really flat? And how does he see the world changing with a completely new view of itself?

We also sent these and other questions to Mad Mike’s benefactor, The Daily Plane website. Someone called JP wrote back, claiming to be the site’s owner. JP wanted to stay anonymous “as this subject matter is very touchy”.

JP added: “As you can see from the user comments in the Washington Post article on this rocket launch, flat Earth brings out the worst in spinning ball Earthers … Having my real name plastered with this venture isn’t in my best interests.”

How does the flat Earth community feel about Mike’s big adventure? “I can only assume other flat Earthers can appreciate a venture by a gentleman shooting himself in a rocket that says ‘Research Flat Earth’ on the side. How could anyone not support this? Also, this launch will not prove the Earth is flat. It is meant to bring awareness to the flat Earth and encourage people to research flat Earth.”

JP said Mad Mike’s second rocket venture “will aim to prove the Earth is not a spinning ball, though it is already proven by high altitude balloon footage, the mechanics of a gyroscope and a number of scientific experiments”.

He said that if Mad Mike was able to prove the Earth was flat or was not a spinning ball, “it would automatically stamp many world governments as liars”.

“Once people connected the dots as to why they would lie about the shape of the Earth, it opens Pandora’s box. A mass awakening to the true nature of our reality.”

Regarding Mad Mike’s sincerity as a flat Earther, JP said: “Mike has always had an ear to the ground as far as conspiracies are concerned. It was just nature [sic] progression for him to be led to our particular community and for us to help him out. You have heard his interview. Does he sound sincere to you?”