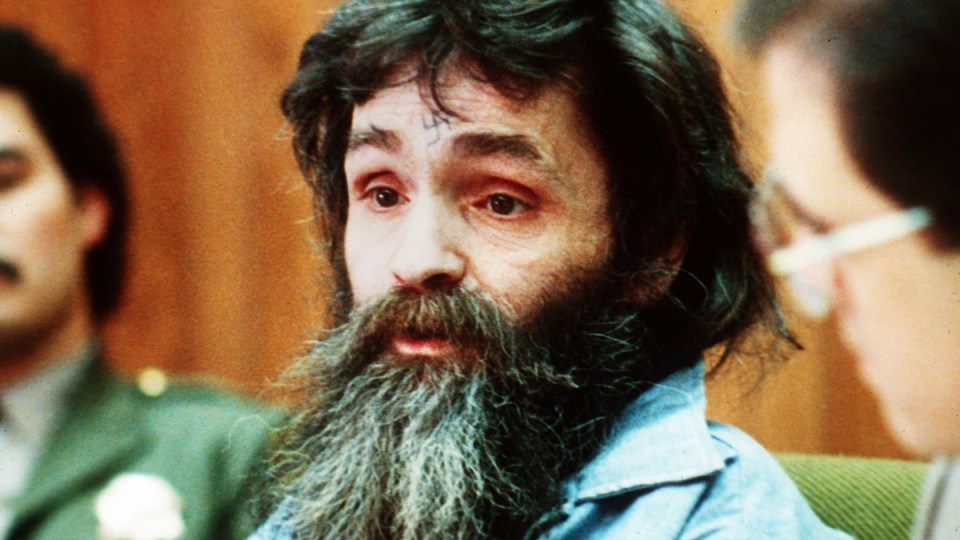 Mass murderer Manson had a 'terrible menace about him'. Photo: AP

Mass murderer Manson, who passed away Monday in California aged  83, was a terrifying mix of evil and madness and I witnessed it first-hand.

In February, 1986, I made my way to San Quentin prison, just north of San Francisco, to attend Manson’s parole hearing. By then he’d been in jail almost 17 years for his part in the killings.

What unfolded then chills me to this day.

Manson entered the hearing with a swastika carved into his forehead – you kind of knew at that moment he wasn’t going to win his freedom – and unleashed a ludicrous rant that mocked the process and reaffirmed his madness.

He was short and wiry, but there was a terrible menace about him. If he got on your train you’d not only switch carriages, you’d switch platforms, then call the cops.

As I wrote then, Manson only occasionally made sense that day at San Quentin and rarely made reference to his infamous family.

Together, they were responsible for nine killings across two days in Los Angeles in August, 1969, including the murder of actress Sharon Tate, the pregnant wife of director Roman Polanski.

Manson, his long, black beard and hair streaked with grey, brought a 20-page handwritten statement to his parole board hearing.

He planned on reading every mad, bad word of it. Stood to do it.

“I don’t think anyone is going to like this,” he began. “It’s not very nice, but I’m not in a very nice position.”

Then he proceeded to rant, his voice occasionally rising to a yell, his face often contorted in anger.

His words made news across the world, such was the fascination for him.

The three-member parole panel listened quietly, which was no small concession given what Manson had to say.

“From the world of darkness I did loose demons and devils, but I have asked no forgiveness,” he said.

He talked about saving rain forests, joining revolutions, maybe heading to Libya or perhaps seeking out the Ayatollah.

“I might go to France, catch somebody I’m upset with,” he said. It was hard not to shudder.

Five minutes into what would have otherwise have been a 30-minute diatribe, the parole board decided it had heard enough and told Manson to resume his seat.

He had just told them: “I will keep my soul and shirk your parole.”

During follow-up questions Manson revealed he spent most of his time in jail making dolls and playing his guitar.

Weren’t the dolls actually scorpions, a parole board member asked.

You get the picture. Even Manson knew the jig was up at this point.

And back to his cell he went.

In the end he would spend close to 50 years in such places for his part in the 1969 murders.

And he never did get parole.

The statement from the California Department of Corrections confirming his passing said he died “from natural causes”.

I’m not ashamed to say that part of me resented that he would be so fortunate.

It was an ending he viciously denied his victims all those years ago.

Charles Manson: My chilling encounter with a mass murderer