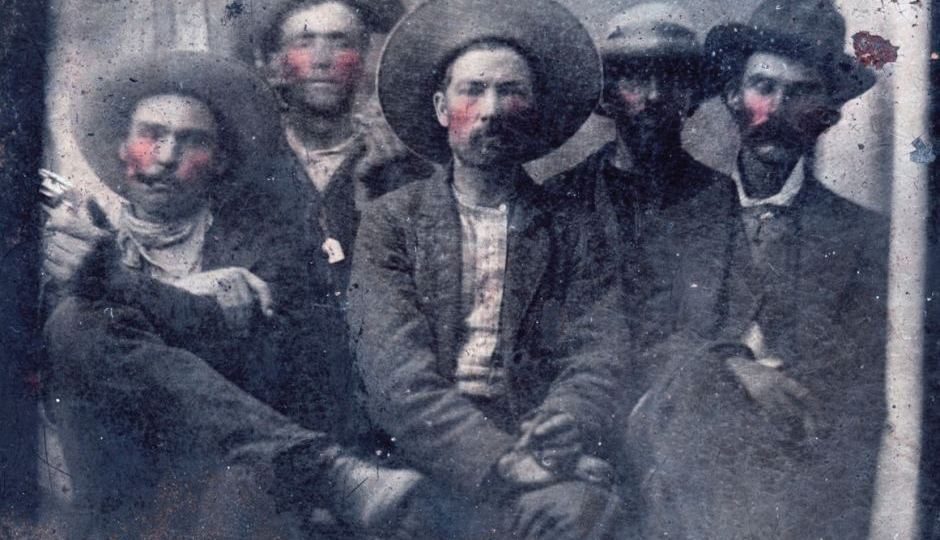 Historians believe the tintype photo of outlaw Billy the Kid, second from left, and Pat Garrett, far right, was taken in 1880. Photo: AP

A 137-year-old photo said to show Billy the Kid with his killer is probably real, experts say, and could be worth millions of dollars after being bought at a flea market for $US10 ($A13) a few years ago.

The self-described history buff said the group picture of five men was part of a set and sat on his wall for several years.

After seeing a TV program in 2015 about the discovery of a photo of the outlaw playing croquet, Mr Abrams was inspired to research him further.

That was when he thought he recognised Pat Garrett, Billy the Kid’s former friend and the sheriff who gunned him down.

Mr Abrams approached Robert Stahl, a retired professor emeritus at Arizona State University who filed a petition in New Mexico Supreme Court in pursuit of a death certificate for the Kid from the state’s medical examiner.

Professor Stahl said he thought it was a “high probability” that it was Garrett in the photo, but he was not sure whether another man was Billy the Kid, also known as William Bonney.

“I told him, ‘The biggest thing you could do right now is get the picture out and let people look at it and give you feedback’,” Professor Stahl said.

“To me, it’s one of the most intriguing and historically significant of those tintypes of the Old West.”

Mr Abrams, who lives in Arden, told Albuquerque’s KRQE-TV that he spent the next several months consulting various forensic experts.

Several said the tintype was likely taken between 1879 and 1880, which coincided with the August 2, 1880, date someone had written on the photo, Mr Abrams said.

A Los Angeles forensic video expert said facial recognition software indicates that it was most likely Garrett and Billy the Kid in the picture, according to a signed declaration.

A handwriting expert in Texas compared a signature from Garrett on the photo with 10 documents with his known handwriting. He declared them matching in a notarised letter in September.

Photo found in 2015 estimated to be worth millions

The Kid and Garrett were close friends until Garrett became Lincoln County sheriff. Garrett ended up fatally shooting the outlaw in Fort Sumner in July 1881.

A photo of the Kid discovered in 2015 has since been estimated to be worth $US5 million ($A6.6 million)

Experts believe a picture that shows the New Mexico outlaw with Garrett would be worth much more.

However, Mr Abrams is not interested in finding out anytime soon.

“One day it may end up at an auction house somewhere. We’ll see what happens,” Mr Abrams said. “Right now, that is not the first thing on my mind.

“I’ve always been somebody who’s interested in history and background.”