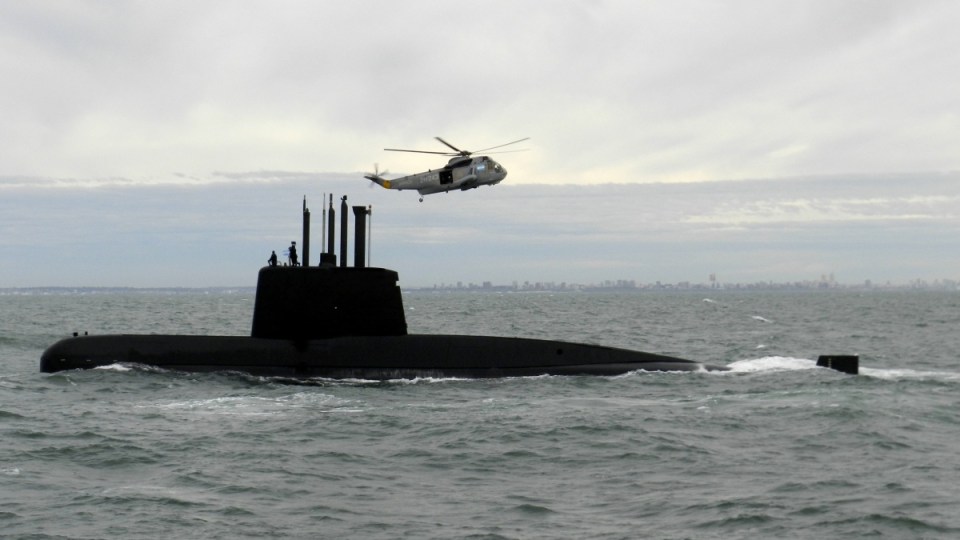 Sounds picked up on the Atlantic floor could be made by missing submarine crewmembers Photo: AP

Sounds detected by probes deep in the southern Atlantic did not come from an Argentine submarine that has been lost for five days, the country’s navy says.

The revelation which came only hours after speculation that banging sounds heard near the sub may have been from the 44 sailors aboard.

Navy spokesman Enrique Balbi says the “noise” was analysed, and experts determined it was likely “biological”.

He says the sounds did not come from tools being banged against the hull of a submarine as was previously reported by some media.

“We all had hope but unfortunately this comes from believing sources that are not trustworthy,” Balbi said on Monday.

“Some sources were saying that this was banging on the hull in Morse code signals.”

Probes deep in the Atlantic first picked up the sounds as the search for the missing navy sub continues after it disappeared five days ago following a report of an electrical malfunction.

The probes were being carried out 360 kilometres off the coast of Argentina and 200 metres down.

Mr Balbi said the sounds  were “constant”, raising some hope the crew of the ARA San Juan submarine might have been intentionally making noise to attract rescuers.

But he did note that the sounds could just as well be from a natural source.

The vessel, with 44 crew on board, reported an electrical problem and was headed back to its base at Mar del Plata when it disappeared last Wednesday local time.

Hopes for a successful search for the submarine waned when the navy said satellite calls detected at the weekend did not come from the vessel.

More than a dozen boats and aircraft from Argentina, the United States, Britain, Chile and Brazil joined the search effort.

Authorities have mainly been scanning the sea from the sky, as storms have made it difficult for boats.

Gabriel Galeazzi, a naval commander, said the submarine had come up from the depths and reported an electrical malfunction before it disappeared 432 kilometres off the coast.

One of the crew is Argentina’s first female submarine officer, Eliana Maria Krawczyk, 35, who joined the navy in 2004 and rose to become the master-at-arms aboard the ARA San Juan.

They were joined by President Mauricio Macri: “We continue to deploy all available national and international resources” to find the submarine, he tweeted.